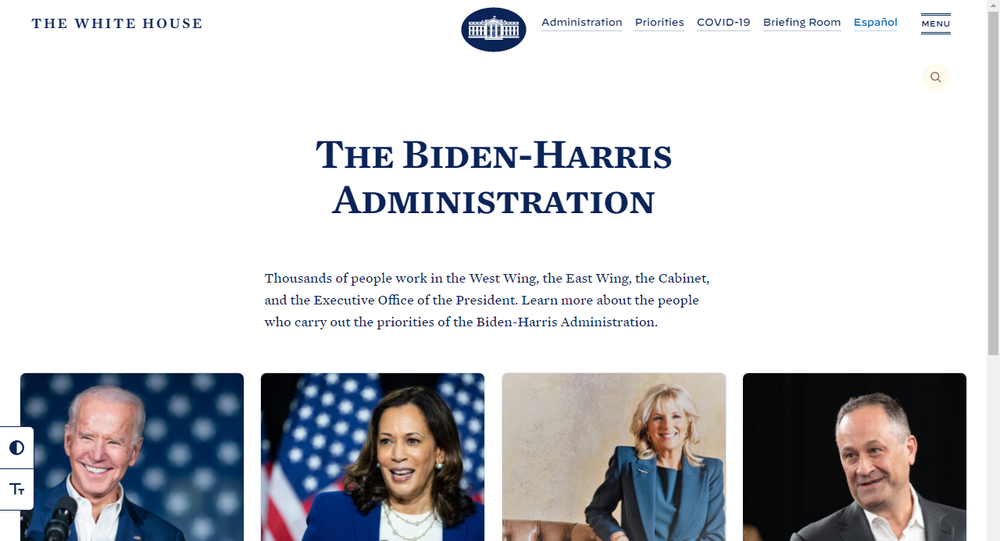 Until now, there had been no US administration in the era of digital communication that listed both the names of the president and the vice president together on its official website or social media channels.

The White House has listed "The Biden-Harris administration" on its official website and social media channels in a move seen by US media as unprecedented.

"Thousands of people work in the West Wing, the East Wing, the Cabinet, and the Executive Office of the President. Learn more about the people who carry out the priorities of the Biden-Harris Administration", the White House administration tab reads.

The White House Twitter page also welcomes visitors with the words "Welcome to the Biden-Harris White House!". The accounts of the two previous administrations, run by President Donald Trump and President Barack Obama had only the leader's names in the welcoming caption.

The move is seen by many as unprecedented, since the name of the vice president has not previously been put into the name of the administration on the official channels. Sometimes, the names of the commander-in-chief and VP would appear combined in media articles or occasional descriptions, as in the case of the Obama White House, but never as an official title.

Reacting to the step away from the tradition, some netizens suggested the move signals that Vice President Kamala Harris is "running it".

She is running it, I guess. Biden is a front man.

They are getting them used to the lingo for Harris takeover

You almost get the sense they know something we don't : )

​Speculation regarding a Harris plan to "take over" the White House continue after several gaffes Biden made with regard to the status of the VP, earlier referring to her as "President Harris" during a vaccination campaign briefing. Earlier in December, Biden appeared to "promote" his running mate to "president-elect", similarly speaking about vaccination efforts.

"I took it to instill public confidence in the vaccine. President-elect Harris took hers today for the same reason," Biden said back at the time.

He was not the only one, as Harris has granted herself a verbal promotion as well, appearing to remove the name of Joe Biden from the administration.