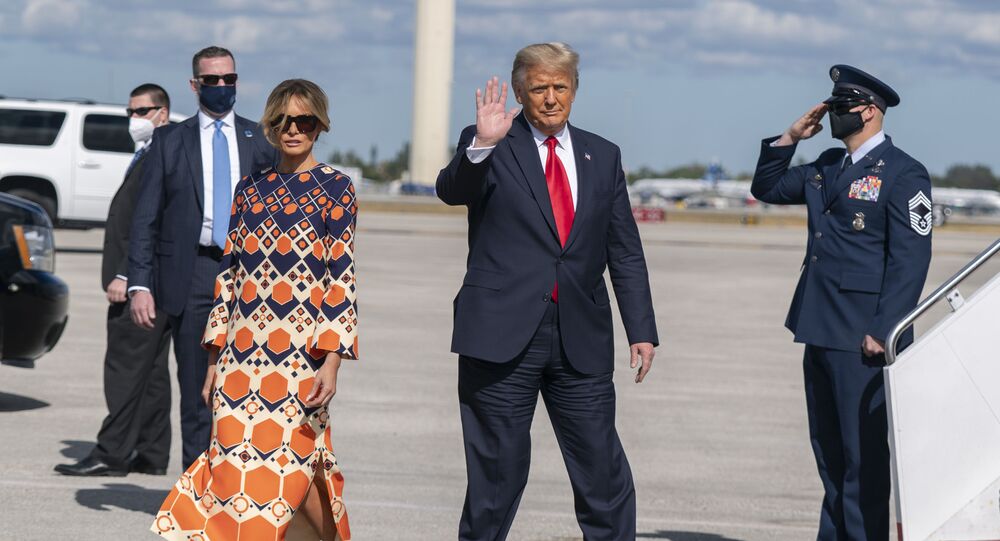 Ex-FLOTUS Struggles to 'Face Truth' that her Husband 'Isn't Good For Her', Claims Relationship Guru

The relationship between Donald Trump and his spouse, a former Slovenian-American model born Melanija Knavs, has long been a subject of speculation. Some, like former White House official turned reality television star Omarosa Manigault Newman, have predicted Melania Trump would not hesitate to ditch the ex-POTUS once they left the White House.

Melania Trump’s body language reportedly displays her regret over having opted to stand by her husband Donald Trump, claims a relationship expert.

Self-proclaimed relationship expert John Kenny has fed into the buzz of media speculations on whether the marriage between the former President and his First Lady will last beyond their White House tenure.

The ex-FLOTUS has likely realised that Trump "isn't good for her," Kenny was cited by the Daily Star.

Melania Trump’s occasionally chilly demeanour towards her husband in public, caught on camera, such as pulling her hand away from him after he spoke to press, has often gone viral.

Moment Melania Trump Pulls Her Hand Away From Donald Trump's As They Step Off Air Force One (Video)https://t.co/QmMH1H1zxz pic.twitter.com/gteEclcT42

​In January, the internet had a field day with footage of the ex-First Lady at Palm Beach airport, as she walked away from her husband towards the car on the day of Joe Biden’s inauguration. While Trump had paused to wave at photographers, his wife continued walking until she was off-screen.

LMAOO Melania Trump so happy this shit show is over 😂😂😂 get them divorce papers ready sis pic.twitter.com/44HCZR53GL

​“She may realise that she has chosen to be with someone that isn't good for her, as her actions dictate, that even in public she finds it hard not to show her emotions. This comes out in her body language and behaviour,” insists the life coach and author, founder of Interpersonal Relationship Coaching (IRC).

Kenny also weighed in on the recent outburst from Melania Trump over rumours of the couple possibly divorcing.

In a scathing response, the Office of Melania Trump tweeted a reply in February to remind that the ex-FLOTUS was now a private citizen.

​It was added that “sources in this article are not affiliated [with] her nor have insight into her thoughts or daily life".

According to John Kenny, the statement may indicate that Donald Trump’s spouse was having difficulty facing the truth, "especially" because she is "being constantly reminded of it".

Dissecting the comment, which lambasted an ‘Unhealthy Obsession’ about her relationship with Donald Trump, the author claims this might be due to the “emphasis Melania Trump herself is placing on it”.

“She might be defending her relationship, as now he is no longer president it is ok for her so speak out. But maybe she is struggling with people highlighting her real emotions. The truth can be hard to face, especially if you are being constantly reminded of it,” Kenny was quoted as saying.

This comes as a panel of psychics from PsychicWorld.com earlier predicted that Melania Trump would divorce her husband this summer and embark upon a new relationship before the year ends, with another psychic and numerologist also predicting a summer-timed ‘upheaval’ in the Trump household .