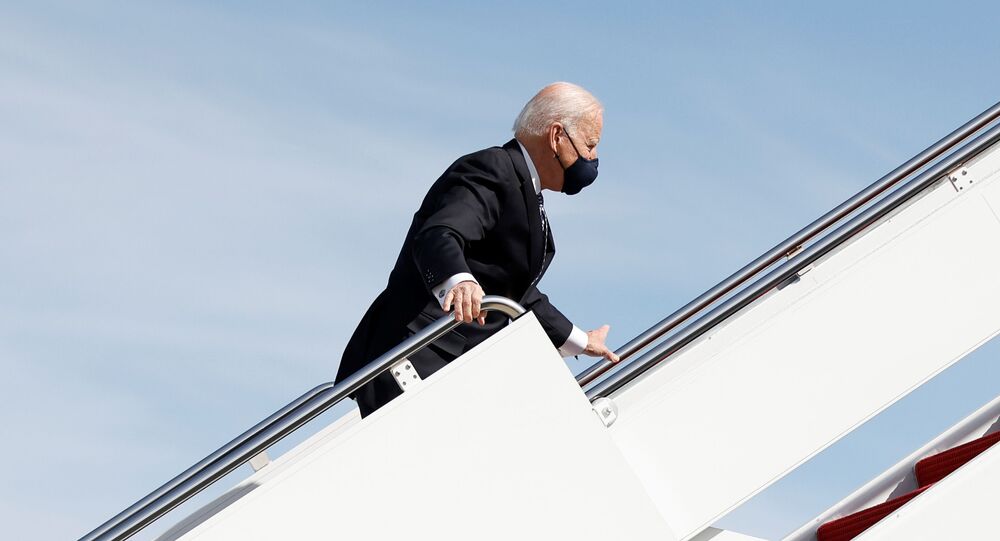 The recent presidential hat-trick of falls on the Air Force One stairs sparked concerns over the health of the president, which were quickly dismissed by White House representatives. They blamed Biden's falls on "tricky" stairs and strong winds. Could his trip to Ohio be confirmation of his fine health?

US President Joe Biden has seemingly recovered from the falling fit he appeared to be suffering from in an incident on 19 March, as he mounted and get off various aircraft during his recent trip to Ohio with ease. The latter was closely monitored by the press, partially because of interest in the president's ability to cope with stairs.

Joe Biden just fell 3 times in a row trying to go up the stairs to Air Force One pic.twitter.com/gTUTckUH32

His voyage to the Buckeye State started in Camp David where he mastered the five-step staircase to his Marine One helicopter without any accidents. The helicopter took president to Air Force One and this time neither the wind, nor the "tricky stairs" could detract from Biden's trip.

Upon his arrival, Biden descended from the plane just as vigorously and deftly as he had managed to enter it and got on with his lengthy tour in Ohio. He was back in Washington in the wee hours, but the late arrival did not seem to affect his stamina as he quickly marched across the White House lawn from his helicopter, practically without stops.

Biden's vigorous tour to Ohio comes in the wake of concerns for his health sparked by the president's ill-starred attempt to get up the Air Force One stairs on 19 March – Biden tripped three times, practically in a row, eventually falling on one knee. The White House representatives were quick to dispel the concerns insisting that the president did not require medical attention in relation to the incident.

White House representatives blamed windy weather and "tricky stairs" for the blunder, whereas the critics of the president suggested that his great age or even alleged issues concerning his mental capacity, which remain unconfirmed, could be to blame.

The Democrat president, however, is not the only president to have had issues with Air Force One stairs: at least two of his predecessors, Presidents Barack Obama and Gerald Ford also came a cropper thanks to treacherous stairs. Obama slightly tripped and had to restore his balance as he descended lightly from Air Force One in March 2015. Ford, in turn, had to ride down the last several steps of the stairs upon his arrival in Austria in June 1975 because rain had made the staircase slippery.