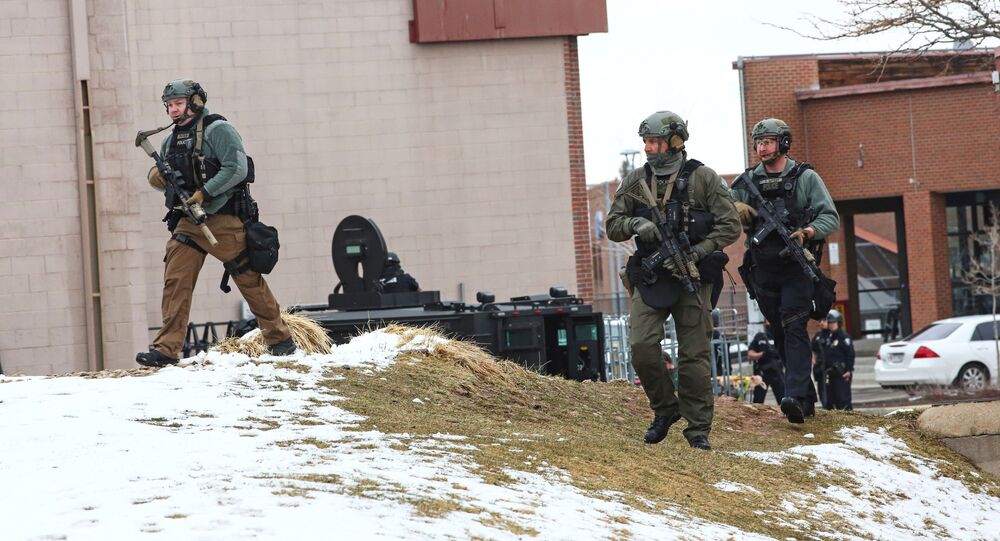 'There Was a Dark Side in Him': What is Known About the Boulder, Colorado Shooter

Police are still investigating the motives of the gunman accused of killing at least ten people in a Boulder, Colorado grocery on Monday.

The suspect in the Colorado mass shooting has been identified as Ahmad al-Aliwi Alissa, a 21-year-old resident of Arvada, a municipality south of the city of Boulder where Monday's tragedy took place.

Police so far have mainly remained tight-lipped about Alissa, who was charged with 10 counts of first-degree murder before being transported to Boulder County Jail.

Here's what's known so far about the suspect who had "lived most of his life in the United States", according to County District Attorney Michael Dougherty's office.

Media reports claimed Alissa, whose family allegedly emigrated from Syria in 2002, bought a gun six days ahead of his attack on the Boulder grocery store King Soopers that left ten people, including a police officer, dead.

One of Alissa's relatives reportedly recalled seeing him "playing with a gun she thought looked like a 'machine gun' about two days" before the assault.

Fox News cited an affidavit as saying that police first received a call around 2:40 p.m. local time on Monday related to an active shooter at the King Soopers supermarket.

People are coming to pay respects to Officer Eric Talley at Boulder Police headquarters today, a day after the shooting. One man told me: “He was a hero” pic.twitter.com/7lGxhI0pmJ

According to the affidavit, one caller dubbed the gunman "a white male, middle-aged with dark hair, a beard, a black vest, and a short-sleeved shirt", while another argued that the shooter was "wearing an armoured vest and was about 5'8" tall, with a chubby build".

Witnesses, for their part, described the suspect as having a black AR-15-style gun and wearing blue jeans.

Fox News also referred to Alissa's alleged Facebook page that contained messages slamming former President Donald Trump's response to migration-related issues and calling the ex-POTUS "such a d***". The suspect also ostensibly shared wrestling photos and bemoaned his failing to have a girlfriend.

Alissa's former classmate, Dayton Marvel, told The Denver Post the 21-year-old once made threats against people during a wrestling bout.

"His senior year, during the wrestle-offs to see who makes varsity, he actually lost his match and quit the team and yelled out in the wrestling room that he was like going to kill everybody. Nobody believed him. We were just all kind of freaked out by it, but nobody did anything about it", Marvel said.

He described Alissa as "a pretty cool kid until something made him mad, and then whatever made him mad, he went over the edge - way too far".

Angel Hernandez, another former classmate and wrestling teammate of Alissa, hinted in an interview with The Denver Post that the suspect was sort of paranoid.

"He was always talking about [how] people were looking at him and there was no one ever where he was pointing people out. […] The sad thing about it is that if you really were to get to know him, he was a good guy […]. But you could tell there was a dark side in him. If he did get ticked off about something, within a split second, it was like if something takes over, like a demon. He'd just unleash all his anger", Hernandez claimed.

He was echoed by the suspect's brother, Ali al-Aliwi Alissa, who told CNN the 21-year-old may have been suffering from a mental illness, and the fact that bullies made fun of his name in high school could have added to him becoming "anti-social".

"We kept a close eye on him when he was in high school. He would say, 'Someone is chasing me, someone is investigating me'. And we're like, 'Come on man. There's nothing.' […] He was just closing into himself", the 34-year-old brother said, adding he never thought Alissa "would kill" and that he "still can't believe it".

In 2018, the suspect was sentenced to one year probation and 48 hours of community service after he was found guilty of third-degree assault over an incident that occurred in November 2017, according to the Colorado Bureau of Investigation's database.

© REUTERS / POOL
Senator Kennedy Suggests 'More Idiot Control' Instead of Gun Regulation Following Colorado Shooting
At the time, Alissa was accused of attacking a classmate at Arvada West High School, with a police officer reporting that the then-18-year-old "got up in [a] classroom, walked over to [the] victim and 'cold-cocked' him in the head".

Police, meanwhile, have said that a probe into the Boulder shooting will take no less than five days to complete as investigators have yet to understand the motive that prompted Alissa to stage the bloodbath.