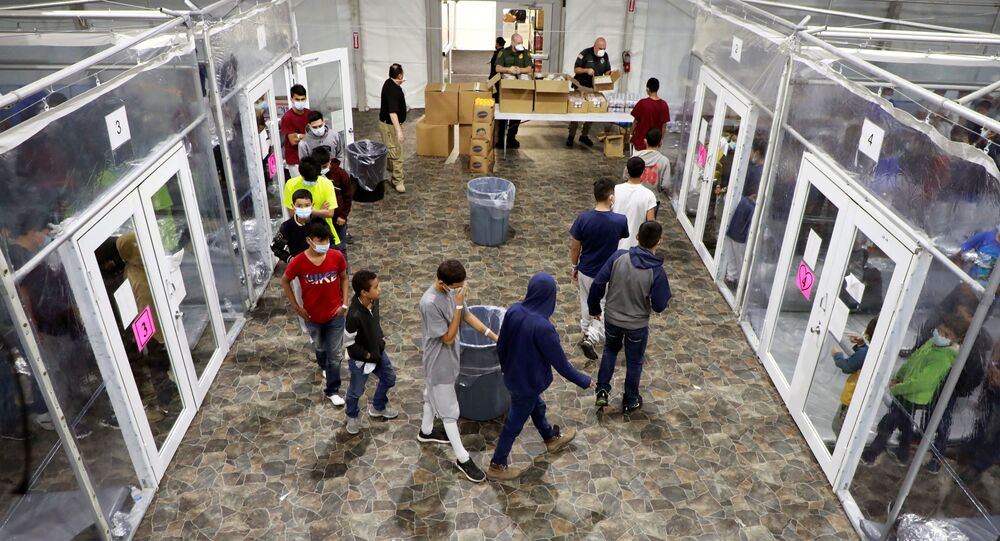 Earlier in the week, Democratic Representative Henry Cuellar shared pictures from a temporary US border facility in Texas, revealing conditions in which undocumented immigrants, particularly minors, exist, while the Biden administration remains reluctant to allow independent journalists into the overcrowded facilities.

The Biden administration on Tuesday released footage from two border facilities in Texas that house immigrant children amid an escalation of concerns over what many suggest is a "border crisis" after photos from the facility emerged earlier in the week.

While the US Customs and Border Patrol (CBP), according to The Hill, continues to “discourage external visitors”, the agency has released two videos and 44 images showing conditions at US border facilities in the Texas cities of Donna and El Paso, an attempt to “balance the need for public transparency and accountability".

The videos show adult migrants and minors receiving food and medical care, sleeping on mattresses covered by foil blankets and exercising. The footage also reveals storage and procession areas, along with areas of recreation, where small children can be seen playing.

A new look into the Donna and El Paso facilities was provided by the Biden administration amid pressure to allow media access to the border hubs as many continue to characterize the situation on the southern US border as a "migrant crisis" and slam Biden for failing to incorporate those words to describe the immigration process.

White House press secretary Jen Psaki has consistently denied that the situation is "a crisis", admitting, however, that the border facilities "are not made for children". When asked why the Biden administration has not yet provided media access to the facilities, Psaki assured reporters that the president's Cabinet is working on that.

“We are working on independent press coverage. We believe that that should happen and that should be the case", Psaki said on Monday, reaffirming the administration's commitment to transparency.

The new official footage from the border facilities came a day after a Democratic representative from Texas, Henry Cuellar, shared pictures from the Donna facility with Axios, slamming what he described as "terrible conditions" in which the migrants live, especially minors.

Biden, who immediately moved to undo Donald Trump's strict migrant policies, has stated that in the middle of a pandemic, "now is not the time" for migrants to rush into the United States. This has not, however, stopped thousands searching for a better life to arrive at US borders shortly after he assumed office.