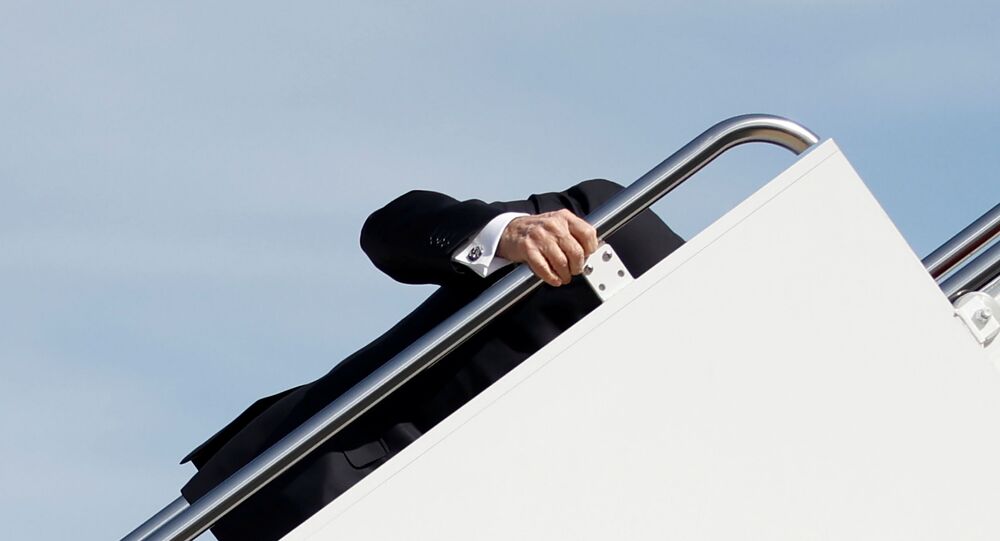 Ups & Downs: US Presidents and Their Airstairs Fiascos

America’s Commander-in-Chief Joe Biden is making headlines this weekend; on Friday, he tumbled to his knees while boarding Air Force One to go to Atlanta. This is not something completely unprecedented in the history of US presidency, however – they are humans, after all.

US President Joe Biden sparked a new wave of speculation about his physical shape after he stumbled three times and fell to his knees on 19 March while climbing the stairs of Air Force One. The White House communications director said that the POTUS was “just fine,” with staffers apparently blaming the windy weather for his misfortune.

Joe Biden just fell 3 times in a row trying to go up the stairs to Air Force One pic.twitter.com/gTUTckUH32

​But this wasn't the first time Biden has had problems with stairs – nor is he the only American president to struggle with steps.

In February, newly inaugurated President Biden was boldly embarking Air Force One in Delaware to return to Washington when he lost his footing on the fifth step. The president, who was at the time carrying something in his left hand, quickly regained his pose – the incident would have probably been forgotten if it wasn’t for his new triple stumble on Friday.

No, the 45th US president didn’t trip up on any airstairs but he did get noticed in June 2020 making sure he didn't loose his footing on a ramp at the US Military Academy at West Point, while taking baby steps to complete his descent.

The ex-president explained his sluggishness by the fact that the ramp was “very long and steep” and he really didn't want to fall “for the Fake News to have fun with.”

Trump descended a ramp extremely carefully at the end of his West Point speech today pic.twitter.com/uMG3KyB1V1

But Trump also had his own moments on Air Force One, like Biden – back in October 2018, he was spotted boarding the plane for Minnesota with a piece of toilet paper stuck to his shoe. The head of state didn’t notice the unwanted guest and took it inside the aircraft for a trip to the North Star State.

Former President Barack Obama also once had visible trouble with plane stairs. Upon his return from a golf outing in Florida back in March 2015, he nearly fell down the ladder when exiting Air Force One. But the 53-year-old ex-president quickly used his hands and relative youthfulness to bounce back.

The prize for the most infamous plane fall in the history of American presidents should probably go to Gerald Ford. In June 1975, he took a tumble while walking down the stairs upon his arrival in Austria. The day was rainy and the steps were slippery, but the 38th US president was still ridiculed for his accident.