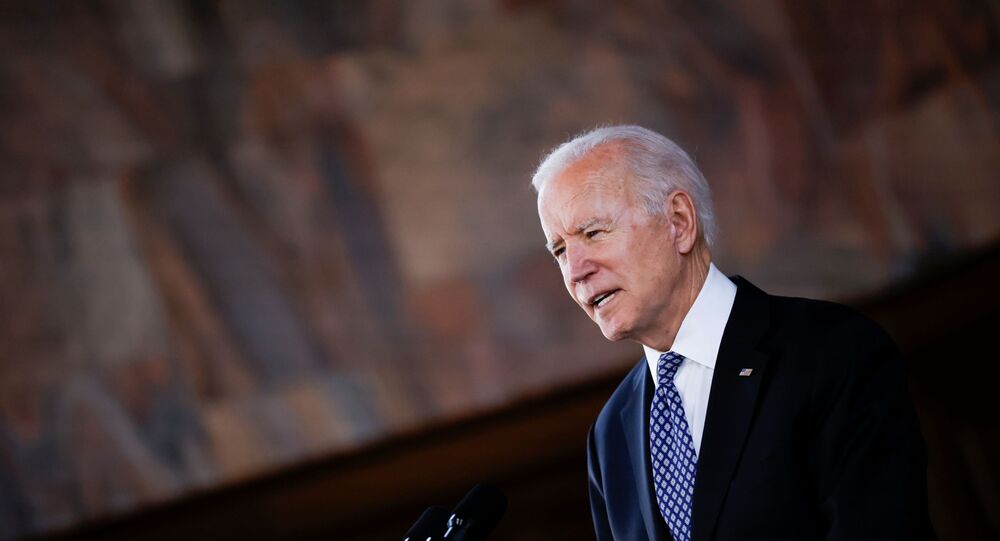 Biden and Harris have both traveled to Atlanta, Georgia, three days after a gunman opened fire at three massage parlors in the Atlanta area.

US President Joe Biden and US Vice President Kamala Harris have apparently slammed former US President Donald Trump without, however, outright naming him, in their remarks after meeting with members of the Asian-American community in Atlanta on Friday.

"For the last year we've had people in positions of incredible power, scapegoating Asian Americans; people with the biggest pulpits spreading this kind of hate," Harris said, adding that xenophobia, sexism and "racism [are] real in America and it always has been."

Biden said in his remarks that there is a “skyrocketing spike” of harassment and violence against Asian Americans and Pacific Islanders.

Biden also took an apparent jab at the former US president, who repeatedly referred to COVID-19 as the "Chinese virus". “We’ve always known words have consequences,” Biden said. “It's the coronavirus. Full stop”.

Donald Trump has been defending the use of the terms “Chinese virus” of “Wuhan virus” in relation to the COVID-19, pointing at the infection’s reported place of origin.

“It’s not racist at all,” Trump said at a press conference last year. “It comes from China, that's why. I want to be accurate.”

On Tuesday, at least eight people were shot dead at massage parlours around the Atlanta metropolitan area. Police have taken the suspected gunman, 21-year-old Robert Aaron Long, into custody. Despite some social media sources rushing to label the killing spree as a racist attack, two of the victims were white.

Long reportedly blamed the massage parlour employees for his sex addiction. Long had grown up attending a conservative Southern Baptist church, and was a patient at an evangelical treatment facility, Hopequest, in 2019 and again in 2020, the Washington Post reports, citing his former roommate Tyler Bayless. HopeQuest, which is located near the first massage parlour Long targeted, advertises its services treating “sex addiction” and “pornography addiction”, as well as "conversion therapy" for homosexuals hoping to alter their orientation. The current director of clinical programmes at HopeQuest is Wayne Carriker, who, according to WaPo, "considers himself ex-gay and has promoted conversion therapy".