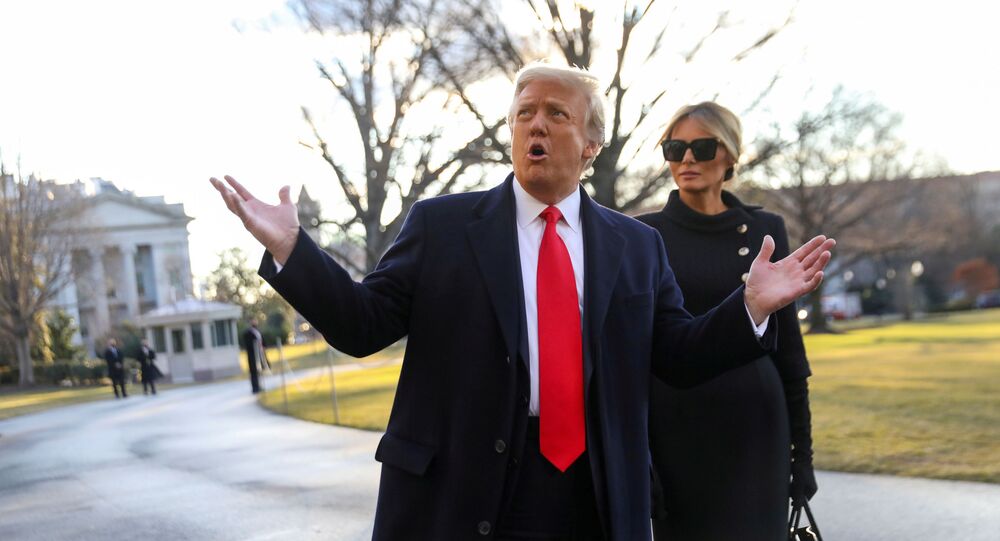 The number of interviews is reportedly so big that it could allegedly undermine Trump's chances of capitalizing on his own autobiography, should the ex-commander-in-chief decide to write one.

Former President Donald Trump will sit for at least a dozen interviews in the coming weeks with authors focusing on his tenure at the White House, Politico reported on Thursday.

According to the report, Trump is scheduled to meet with many reporters who have spent years monitoring his political aspirations or covering his presidency and reelection campaign.

The New York Times' Jeremy Peters and Maggie Haberman are reported to be on the list, as are Michael Bender of The Wall Street Journal, ABC News' Chief Washington Reporter Jon Karl, Michael Wolff, author of "Fire and Fury: Inside the Trump White House," and Washington Post journalists Philip Rucker and Carol Leonnig.

“We are not discussing particulars of any individual book interviews that President Trump is giving but it’s safe to say that he remains the hottest name in politics and he’s the interview that everyone wants,” senior advisor Jason Miller is quoted in the report as saying. “We’re tracking nearly three dozen post-presidency books where he will be the star.”

Some of the writers are writing sequels to capitalize on the popularity of their previous Trump books — as well as the continuing interest in details of his presidential term.

An undisclosed aide quoted in the report emphasized that the interview list is not determined as of yet, and Trump could still decline to meet with any of these writers. All the interviews will reportedly take place at his Mar-a-Lago estate in Palm Beach, Florida.

Last year, Trump found himself under a whirlwind after agreeing to 18 taped interviews with WaPo's famous reporter Bob Woodward, whose best-selling book "Rage" included a conversation in which the former president confessed to downplaying the novel coronavirus in order "not to create a panic."

The outlet suggested that, given the 2024 election on the horizon, the former president wants to keep his name in the political discussion.

“Donald doesn’t believe in the concept of ‘no comment.’ He feels like there will always be one side of the audience who sympathizes with him. So it’s not surprising to me that every one of these book interviews he’s going to sit through and think he has the power to manipulate the authors and try to influence them,” former senior White House official Omarosa Manigault Newman is quoted in the report as saying.

After being fired from the administration in late 2017, Manigault Newman herself published the best-selling book "Unhinged: An Insider's Account of the Trump White House."

According to the report, the 45th president, who sat down for multiple book interviews during his tenure in the White House and wrote half a dozen books prior to that, was keen to generate interest in new books looking back at his time in the West Wing.

Trump could also be dissatisfied with the many books about his presidency written by outsiders or disgruntled former subordinates. According to Politico, quoting an unnamed aide, it is of significant importance for Trump to "control his own narrative and utilize these mediums to share his thoughts and correct the record."

In particular, Bolton, who served as advisor of the president from April 2018 to September 2019, published the book "The Room Where It Happened" last year, in which he sharply criticized Trump. The former aide claimed among other things that the president did not know that the UK was a nuclear power and described him as a president who was easily manipulated by the leaders of China, Russia, Turkey, and even North Korea.

Trump called Bolton "one of the dumbest people" he had worked with. He also said that his former aide had pursued an overly aggressive foreign policy, and accused him of illegally disclosing classified information.

Former White House counselor Kellyanne Conway and his eldest son, Donald Trump Jr., who wrote two political books when his father was in office, are reportedly working on their own books now as well.

All in all, according to the Wall Street Journal's estimates, more than 1,000 titles have been written about Trump since he took office in January 2017.