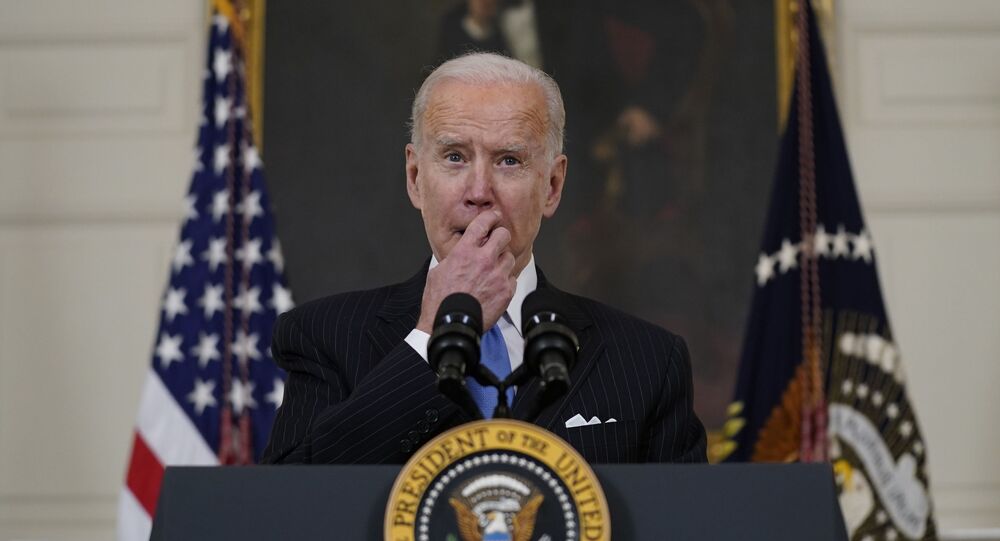 The already tense US-Russia relations hit a new low on Wednesday, say US academics and former officials, expecting a new wave of sanctions against Moscow and a new "Cold War" between the countries over global political issues and regional interests.

Speaking to ABC News' George Stephanopoulos in a Wednesday interview, US President Joe Biden said he believes that his Russian counterpart Vladimir Putin is "a killer" who will "pay a price" for "election interference".

The remarks were made in the wake of a US intelligence report that claimed Russia had conducted influence operations aimed at "denigrating Biden's candidacy and undermining public confidence in the electoral process". Moscow shredded the assumptions as groundless and called Russian ambassador to the US, Anatoly Antonov, back for consultations.

Commenting on the provocative remarks and personal attack, President Vladimir Putin has wished the US president "good health" and said that Russia will continue cooperation with America in the spheres of Moscow’s interests.

The terms Biden used against Putin are something a US president would hardly use referring to the USSR's leaders in the Soviet era, says Dr Paul Craig Roberts, an American economist and former assistant secretary of the Treasury for economic policy under President Ronald Reagan.

"Washington has been demonising Putin and Russia ever since Putin restored Russian sovereignty and announced that the era of Washington’s unipolar hegemony was over", explains Dr Roberts."Biden is just continuing in that tradition. The purpose of Biden’s rhetoric is to tell the world that the United States is more powerful than Russia and can punish Russia at will".

In the wake of Biden's fiery remarks and subsequent departure of the Russian ambassador from Washington, White House Press Secretary Jen Psaki claimed at a press briefing that the Biden administration "is going to take a different approach in our relationship to Russia than the prior administration" and would be "straightforward… and direct in areas where [they] have concerns".

"As the president said last night, certainly the Russians will be held accountable for the actions that they have taken. We’ll have more on that soon", Psaki said, noting that there are areas where she believes Russia and the US "can work together", citing New START and nuclear proliferation issues.

Under the new US administration, Washington-Moscow relations will change, says David Schultz, author and professor of political science and law at Hamline University, Minnesota, citing the developments in ties between the two powers.

"There are many reasons for the change, including evolving positions that both Russia and the US have in international politics", he notes. "Certainly the comments by US President Joe Biden are going to increase the tensions between the two nations, and there are indications that where we are headed is toward a new Cold War where both countries fight over surrogate issues and with regional geographic partners".

Joe Biden's hawkish rhetoric could serve as a pretext for another round of sanctions, according to Thomas R. Pickering, former US ambassador to Russia.

"We have to wait and see", he notes, adding that when it comes to diplomacy, it will obviously be more difficult to communicate in a "negative atmosphere". He acknowledges that it was not "easy" or "smooth" even "before the statements were exchanged or before President Biden responded to the question".

Still, there is more to Biden's comments than a justification for more sanctions, believes Dr Roberts. He does not rule out that by demonising the Russian government, Washington is preparing the American and European populations for a US-led "regime change" attempt.

"Washington does not use diplomacy. It uses accusations and threats", the economist says, adding that in the eyes of the US government, there can be no other power than Washington, to which everyone "must" submit.

Instead of kicking off a blame game, Biden should have begun in a very different way towards Russia by demonstrating a friendlier and more constructive approach, believes Peter Kuznick, professor of history at American University, where he founded the Nuclear Studies Institute.

"It's clear to me that Biden is starting off as a tough guy", the professor says. "There is a bipartisan opinion in the United States, Democrats, at least some Democrats, and Republicans calling for a strong defence policy and a hard-line resistance toward Russia and China right now. Biden is playing to that sentiment in the United States, but his words are not helpful".

Washington has already gone on a sanctions spree over the alleged poisoning of Russian blogger Alexei Navalny and Biden is promising further actions, which could mean more sanctions or expanded sanctions, Kuznick notes. The sanctions policy conducted by three consecutive US administrations has failed to reach its objectives, as it has driven Moscow and Beijing closer and made Russia more self-sufficient, the academic believes.