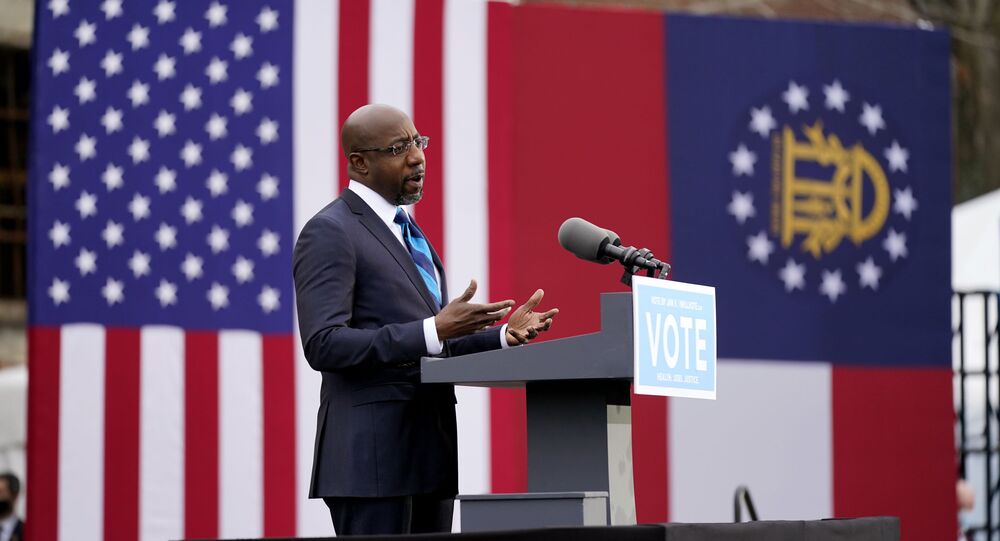 "Politicians in my home state and all across America in their craven lust for power launched a full-fledged assault on voting rights. They are focused on winning at any cost — even the cost of the democracy itself," Warnock said, as reported by Axios.

"I submit that it is the job of each citizen to stand up for the voting rights of every citizen, and it is the job of this body to do all that it can to defend the viability of our democracy."

'Jim Crow' refers to the US period between the end of Reconstruction (1877) to the beginning of the Civil Rights Movement in the 1950s. Racial segregation laws, or 'Jim Crow laws,' called for the separation of non-white - or "colored" - Americans from white Americans in schools, jobs, housing and even places of worship.

Not long after the end of chattel slavery in the US, new laws were imposed in southern states, requiring literacy tests, poll taxes and deliberately discriminatory registration systems that disproportionately blocked the voting registration of non-white (primarily Black), and uneducated individuals.

Georgia Secretary of State Brad Raffensperger, a Republican, highlighted Wednesday that the US National Intelligence Council found "no indications that any foreign actor attempted to alter any technical aspect of the voting process in the 2020 elections."

Raffensperger went on to assert the "unqualified reports from America’s intelligence community are yet more confirmation, from independent, objective intelligence professionals that the elections here in Georgia and across the country were secure and accurate."

Nevertheless, Georgia bills HB 531 and SB 241 have been introduced as part of the GOP's nationwide push to reconfigure voting submission and registration. SB 241, for example, seeks to replace the current subjective signature match process with driver's license or state ID card-verification processes. Those without such documentation would be asked to provide a photocopy of another accepted ID, and provide their Social Security number and date of birth.

According to a Washington Post analysis, the complete GOP effort - which spans 43 states - could result in the “most sweeping contraction of ballot access in the United States since the end of Reconstruction."

Both 2020 US Senate races in Georgia went to runoff elections after neither candidate secured a majority of the votes in November. However, Senate runoff elections resulted in victories for both Democrats, including Warnock, who became the first Black US Senator from Georgia after unseating now-former Sen. Kelly Loeffler (R-GA).

‘We Will Not Back Down’: China’s EU Ambassador Warns Bloc to ‘Think Twice’ on Xinjiang Sanctions

US Sentences Florida Man to 4.5 Years for Violating Venezuela Sanctions