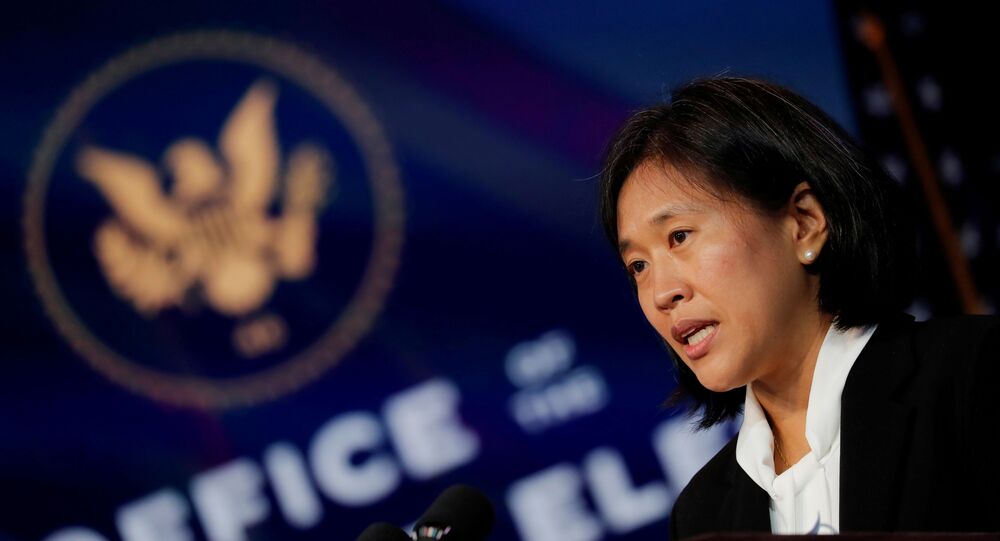 Prior to being nominated and confirmed as the US trade representative, Katherine Tai served as chief counsel for the Office of the US Trade Representative (USTR). Tai, a 46-year-old daughter of Chinese immigrants, is fluent in Mandarin, and is the first woman of color to serve in the cabinet-level position.

On Wednesday, the US Senate unanimously voted 98-0 in favor of confirming Katherine Tai, a vocal critic of China's trade practices, to serve as the top trade official in US President Joe Biden's administration.

98-0: Senate confirms Katherine Tai to be US Trade Representative, the first member of President Biden's Cabinet to be unanimously confirmed by the 50-50 split Senate. pic.twitter.com/nbeMUTBOea

​The overwhelming approval comes as the first unanimous confirmation of a Biden cabinet official.

Prior to her Wednesday confirmation, Tai pledged to re-engage the US with the World Trade Organization (WTO), the principal forum for setting international trade rules, but also highlighted that the group "does need reform."

She also spoke openly of her desire to hold Beijing accountable and counter any alleged "unfair trade practice."

"I previously served as America’s chief enforcer against China’s unfair trade practices. I know firsthand how critically important it is that we have a strategic and coherent plan for holding China accountable to its promises and effectively competing with its model of state-directed economics," Tai told members of the Senate Finance Committee last month.

Furthermore, the Biden administration plans to hold Beijing accountable for its phase one commitments laid out in the US-China trade deal negotiated by USTR predecessor Robert Lighthizer, according to Tai.

"I know the opportunities and limitations in our existing toolbox. And I know how important it is to build what the President has termed 'a united front of U.S. allies,'" she expressed.

The 47-year-old Biden cabinet official is the daughter of two Chinese immigrants who were born in mainland China and raised in Taiwan before coming to the US.

"My dad became a researcher at the Walter Reed Army Institute of Research. He helped the Army develop treatments for illnesses that had debilitated GIs during the Vietnam War – the war in which my father-in-law fought bravely as a young man," she said during her testimony.

© REUTERS / Tasos Katopodis
Katherine Tai, nominee for US Trade Representative speaks at the Senate Finance Committee hearing at the US Capitol in Washington, DC, U.S. February 25, 2021

"My mom still works at the National Institutes of Health. She heads a clinical trials network, developing treatments for opioid addiction that will help to stem an epidemic causing so much suffering in our communities."

CNBC noted that between 2007 and 2014, Tai repeatedly represented Washington in litigation against Beijing at the WTO.

While Tai has stressed the need for a strategic approach in countering China's so-called "unfair practices," she testified her first priority as USTR "will be to help American communities emerge from the pandemic and economic crisis."

"In the longer term, we must pursue trade policies that advance the interests of all Americans — policies that recognize that people are workers and wage earners, not just consumers; policies that promote broad, equitable growth here at home; policies that support American innovation and enhance our competitive edge," she added.

US Senate Confirms Jennifer Granholm to Be Biden's Energy Secretary