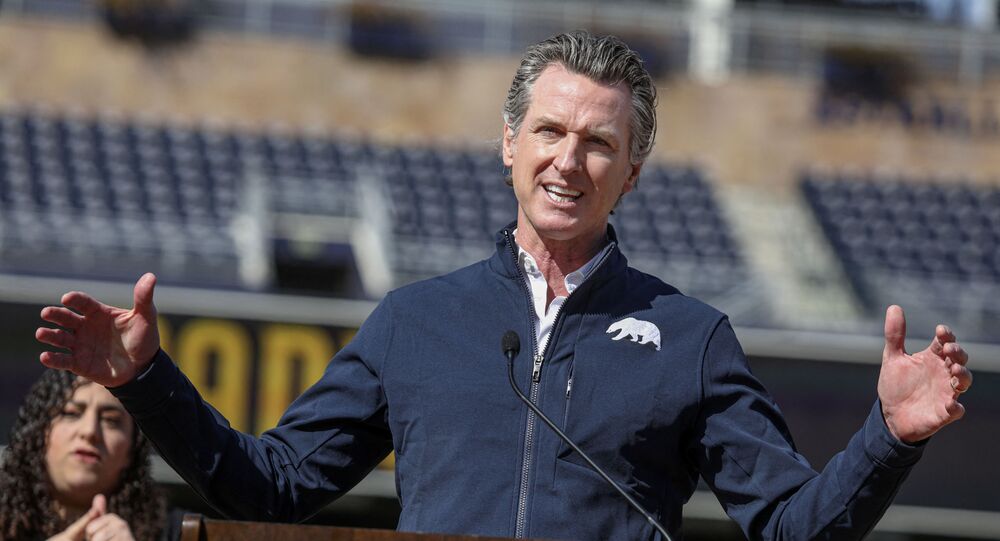 The Democrat previously accused "extremists", supporters of former US President Donald Trump, as well as anti-mask and anti-vaccine activists of attempting to remove him from office. His critics say laws and policies implemented by the governor have made life in the Golden State worse.

California's Governor Gavin Newsom has claimed that racism is behind a campaign in the state to remove him from office. Speaking to reporters in Alameda County, the politician said the authors of the petition fear California is becoming less white under his leadership.

"Look at the petition, look at the actual reasons they themselves listed. It has to do with immigration. The browning of California", Newsom said, using air quotes to emphasise the word "browning".

However, the document calling for his recall does not mention race. Among other things, it says:

"Laws he endorsed favor foreign nationals, in our country illegally, over that of our own citizens".

The top California official also reiterated his previous accusations and alleged that the petition was masterminded but "alt-right conspiracy theorists" and supporters of Donald Trump.

"The chief proponent believes that we should microchip immigrants. Look at the original sponsors of it, you have someone who is … a proud member of the three percenters - an alt-right militia group. Others that are devout conspiracy theorists that believe Q-Anon. Another that literally supports the insurrection, supported it on January 6th. That's the group”, the governor said.

Previously, Newsom said that the campaign to remove him from office had nothing to do with dissatisfaction with his leadership but was instead a challenge to California’s progressive policies on immigration, diversity, healthcare, and criminal justice. "It’s about our clean air, clean water programmes, meeting our environmental strategies", he told KQED radio last week.

Other Democrats have also attempted to portray the public campaign against Newsom as a project initiated by Republicans and Donald Trump supporters. Senator Elizabeth Warren called the Recall Newsom campaign a “naked partisan power grab”, while Cory Booker called the campaign unpopular, despite the fact that over two million residents of California have signed the petition.

In a naked partisan power grab, extreme right-wing Republicans are trying to recall @GavinNewsom. Why? Because he dares to listen to scientists and fights to put power in the hands of working people. Let’s have Gavin’s back:https://t.co/7erlPIXytM

​According to the organisers of the campaign, 38 percent of signatures came from Democratic voters or independents.

Why Do Californians Want Newsom to Go?

California is one of 19 states that allow voters to remove officials from office before their term expires. According to US media, over the past 61 years, every governor has faced a recall petition. Hollywood star Arnold Schwarzenegger, who headed the state between 2003 and 2011, first became governor when his predecessor Gray Davis was voted out of office.
Generally, recall petitions aren't successful and it seems the one against Newsom would have failed too, had it not been for the coronavirus pandemic.

Initially, the authors of the campaign criticised the governor for implementing laws that “are detrimental to the citizens of this state and our way of life”. They also accused him of failing to address the issue of homelessness and blamed him for high taxes.

After the pandemic started, Californians became angry when Newsom introduced strict measures aimed at curbing the spread of the disease - in particular, his decision to close businesses and schools. The discontent reached a boiling point when the governor was spotted in a fancy restaurant surrounded by friends at a time when he had told residents of California to stay at home.

The organisers of the campaign must submit a number of signatures that is equal to 12 percent of the voters during the state’s last gubernatorial election. In this case, it’s about 1.5 million signatures. Meanwhile, the organisers have already collected over two million, but they have to undergo a verification process. If they do, a recall vote will be held, where residents will be asked two questions – whether they want to remove Newsom from office or not and who should replace him.

Newsom himself has signalled that the petition is likely to qualify for the vote. Among the candidates who have voiced their desire to replace him are ex-San Diego Mayor Kevin Falcouner and John Cox, who lost to Newsom in the 2018 election. Both are Republicans, but there is no limit to the number of candidates who can participate in the recall vote.