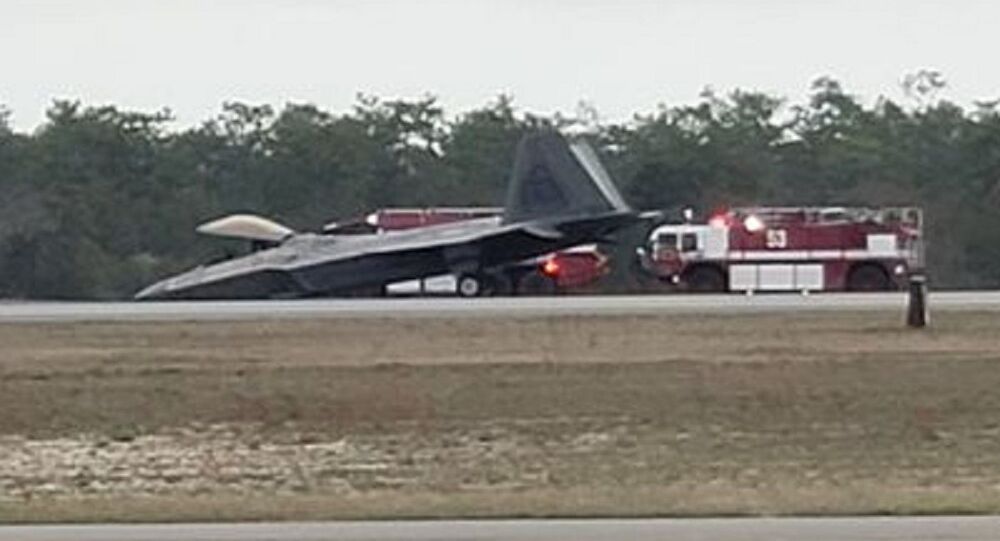 US F-22 Scrapes Ground When Landing…Again

The incident is the latest in a series of similar failures that the F-22, touted by some as “the most lethal combat plane in the world”, has suffered in the past several years.

A fifth-generation US F-22 Raptor fighter jet has made an emergency landing, with its nose down on the runway of Eglin Air Force Base in Florida.

“The F-22 experienced an in-flight emergency. The aircraft landed safely. There was one person on board. Fire crews responded immediately and the pilot was transported to flight medicine for an evaluation”, an Eglin news release stated on Monday, adding that “an investigation into the circumstances surrounding the mishap is underway”.

An alleged photo of the jet and two crash trucks behind the F-22 after its emergency landing emerged on the unofficial "Air Force amn/nco/snco" Facebook page, with the caption “nose gear failure” below the picture.

The developments came after an F-22 crashed in Florida in mid-May 2020, in an incident that took place 12 miles (19 km) northeast of the Eglin base.

2018 saw two separate incidents involving F-22s, one at Naval Air Station Fallon in Nevada and another at Elmendorf Air Force Base in Alaska. In both cases, the all-weather stealth plane landed with its fuselage scraping against the ground.

© Sputnik / Mikhail Voskresenskiy
US Media Reveals Why Russia's Su-35 is Superior to F-22
Also in 2018, an F-22 fighter suffered a catastrophic engine failure while flying out of Tyndall Air Force Base located 12 miles east of Panama City, Florida.

The Drive website has, meanwhile, reported that the US Air Force has a total of 185 F-22s, “125 or so of which are combat-coded at any given time”. As for the remaining fighters, many of them “would require extensive upgrades to make them as capable as their combat-coded counterparts”, according to The Drive.

The US magazine National Interest, for its part, touted the F-22 as “a phenomenal fighter that happens to be phenomenally expensive as well as maintenance-intensive”.

The news outlet pointed out the jet’s “intolerably low availability”, which The National Interest claimed was “the result of maintenance difficulties, spare parts issues and peculiar Air Force practices such as splitting off detachments of Raptors to send overseas”.