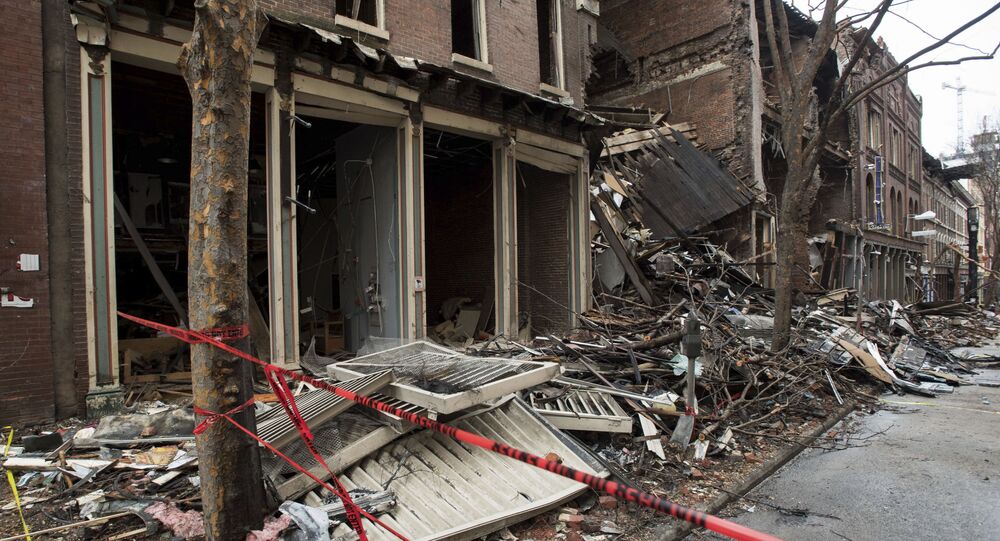 The Nashville bombing unfolded on December 25, 2020, and saw local resident Anthony Warner detonate a bomb inside a recreational vehicle (RV) in downtown Nashville, Tennessee. Aside from Warner, the explosion caused no other fatalities, but did result in injuries to at least three people who were near the area.

The US’ Federal Bureau of Investigation (FBI) revealed on Monday that the deceased Nashville bombing suspect had acted alone, and had no intention to carry out a terrorist attack.

The bureau stated in a release that Warner was acting alone when he took it upon himself to build and detonate a “vehicle-borne improvised explosive device,” and that “his actions were determined to not be related to terrorism.”

Officials explained that they came to their conclusions after sifting through more than 3,000 pounds of evidence from the blast site, investigating over 2,500 tips on the incident and conducting 250-plus interviews. Officials also tapped on the bureau’s Behavioral Analysis Unit in Quantico, Virginia, to pinpoint Warner’s motives.

“Based on analysis of the information and evidence gathered throughout the investigation, the FBI assesses Warner’s detonation of the improvised explosive device was an intentional act in an effort to end his own life,” officials concluded.

Investigators explained that Warner’s state of mind was “driven in part by a totality of life stressors – including paranoia, long-held individualized beliefs adopted from several eccentric conspiracy theories, and the loss of stabilizing anchors and deteriorating interpersonal relationships.”

© AP Photo / Mark Humphrey
A vehicle destroyed in a Christmas Day explosion remains on the street Tuesday, Dec. 29, 2020, in Nashville, Tenn. Officials have named 63-year-old Anthony Quinn Warner as the man behind the bombing in which he was killed, but his motive remains elusive.

Early on in the investigation, it was reported that law enforcement authorities were exploring leads that indicated Warner had believed in a theory that suggested prominent entertainment figures and politicians were actually lizards. Additional reports suggested that Warner had believed in theories regarding the rollout of 5G networks, since the explosion took place near an AT&T facility and caused massive tech setbacks for the region.

Joel Siskovic, spokesperson for the FBI, told the Nashville Tennessean that the agency’s probe did not find any evidence to suggest that Warner had specifically chosen the blast site because of the AT&T services.

It was further determined that the 63-year-old Tennessee resident had chosen to detonate the explosive device in downtown Nashville at about 6:30 a.m. local time “so that it would be impactful, while still minimizing the likelihood of causing undue injury.”

Findings have led investigators to conclude that Warner had zero intention to “use violence to bring about social or political change,” and did not appear to have a personal grievance against any individual or business in the area.

However, the bureau did caution that while “only Warner knows the real reason why he detonated his explosive device,” officials involved in the monthslong probe are “confident” that their assessment is accurate.

Although the Christmas Day explosion did destroy multiple buildings in Nashville’s historic Second Avenue, Warner was the only individual to die as a result, since many residents had evacuated after a loudspeaker on the RV blared a warning that a bomb was set to explode.

No further investigations into the incident are expected.