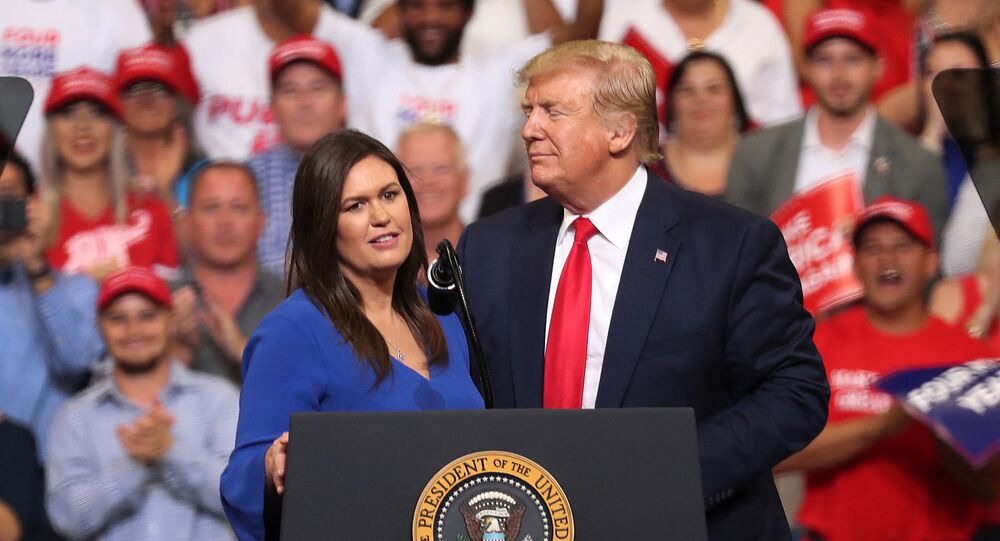 Sarah Sanders had been part of the Trump administration since he took office in January 2017. She became press secretary in July of that year and served in the role until 2019.

Former US President Donald Trump made an unexpected stop at a campaign event for ex-White House press secretary Sarah Sanders who is currently running for governor of Arkansas.

On Sunday, Sanders posted a photo of her and the former POTUS on her Twitter page, tweeting about a "great weekend on the campaign trail featuring a surprise appearance at one of my events by President Trump!"

It was unclear where and when the fundraising event was held and who else attended it.

Great weekend on the campaign trail featuring a surprise appearance at one of my events by President Trump! pic.twitter.com/mn81i9AbsU

The developments were preceded by the ex-US president touting Sanders in late January as "a warrior who will always fight for the people of Arkansas and do what is right, not what is politically correct", a statement that was made shortly after the 38-year-old announced her bid.

"Sarah is strong on borders, tough on crime, and fully supports the Second Amendment and our great law enforcement officers. She loves our military and veterans - and her home state of Arkansas. Sarah will be a great governor, and she has my complete and total endorsement!", Trump added.

She thanked him for the move, pledging that if elected as Arkansas governor, she will "defend our freedom and lead with heart".

© AP Photo / Chris Carlson
Sarah Sanders Trolls a Stuttering Joe Biden on Debate Night: ‘No Idea What He is Talking About’
Sanders is the daughter of former Arkansas Governor Mike Huckabee. She's the 38-year-old who replaced Sean Spicer as press secretary in 2017 and served in the capacity until June 2019.

At the time, Trump gave kudos to Sanders by praising her as "a very special person with extraordinary talents, who has done an incredible job", saying if she decides to run for governor of Arkansas "she would be fantastic".