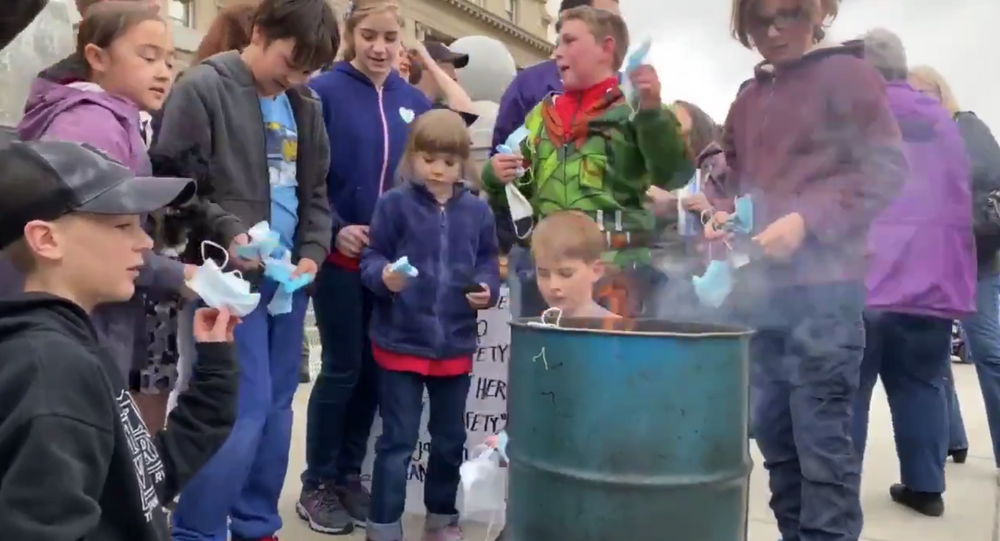 Earlier, Republican lawmakers within Idaho’s state legislature cleared a measure through its House of Representatives that would effectively prevent any future mask mandates from being implemented by government entities.

Recently surfaced video footage has documented dozens of American children being urged to burn their face masks outside the Idaho Capitol over the weekend, as more than 100 maskless residents gathered to protest local mandates.

The Saturday event, one of many that took place across the Gem State, saw children being instructed by parents and guardians to toss their respective face coverings into a trashcan fire on the steps of the state building.

“Be careful, watch the fire,” one individual is overheard saying as a group of children are seen picking up masks only to toss them into the flames. After several masks are tossed in, a chorus of cheers erupts. “Alright, that’s enough for right now,” another event attendee says.

At one point in the recording a child is heard yelling out “destroy them” and “feed them to the fire.”

It’s worth noting that Idaho’s Republican Gov. Brad Little has never imposed a statewide mask mandate; however, local governments have initiated restrictions, including in the state’s capital of Boise.

Similar to earlier demonstrations where some Americans were acting out for not being able to eat at restaurants or get a haircut at a salon, many individuals attending the recent events are alleging that their rights are being violated.

Since the onset of the pandemic, over 173,00 residents from Idaho have contracted SARS-CoV-2, the virus that causes COVID-19. The state recently reported 378 new cases, according to figures obtained by worldometer.

Helicopter Crashes in Idaho During Training, Killing Three National Guard Pilots On Board