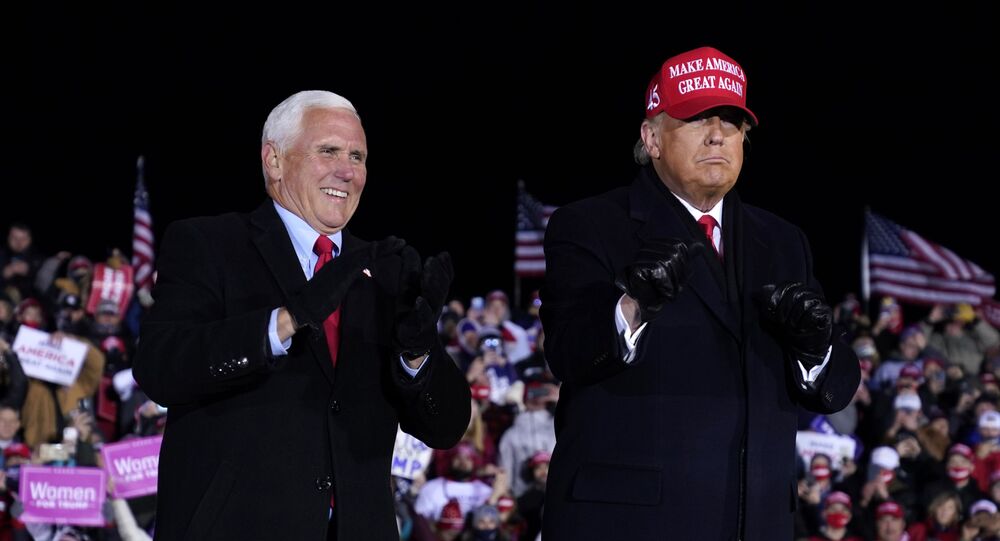 Late last month, Mike Pence reportedly reaffirmed his close "personal" relationship with former US President Donald Trump, and suggested that he may launch an organisation to defend the ex-POTUS administration's legacy.

Next month, former US Vice President Mike Pence is reportedly scheduled to speak at an event hosted by a Christian non-profit organisation in South Carolina, in what will be his first public remarks after leaving office.

The AP news agency cited an unnamed Pence aide as saying that the ex-vice president will keynote in April a dinner hosted by the Palmetto Family Council, a lobbying organisation that promotes conservative Christian ideas in South Carolina state laws, including those related to sexual morality.

© AP Photo / Erin Schaff
Vice President Mike Pence officiates as a joint session of the House and Senate convenes to confirm the Electoral College votes cast in November's election, at the Capitol in Washington, Wednesday, Jan. 6, 2021.

The Pence aide argued that during the speech, the former vice president will touch upon “traditional conservative talking points”, but will focus on what Pence perceives as the accomplishments of the Trump administration.

Palmetto Family Council President Dave Wilson, for his part, claimed that Pence will deliver a speech during a sponsored dinner at the Columbia Metropolitan Convention Center on 29 April.

In an interview with AP, Wilson described Pence as a “prime person” to address a Palmetto Family Council event due to the “level of faith” that the ex-vice president embodied when in office.

“Vice President Mike Pence […] is very reflective of the ideas, policies and direction that we at Palmetto Family want to see in South Carolina: bringing faith to the forefront and growing the next generation of conservative leaders for our state”, Wilson stressed.

The remarks came a few weeks after Jim Banks, an Indiana Republican and chair of the conservative Republican Study Committee, told CNN about lawmakers convening at Pence’s transition office in the Washington, DC area, where they discussed the future of the Republican Party and lauded the achievements of the Trump administration.

During the gathering, Pence said he has no hostility toward the ex-POTUS over the deadly 6 January riots, in which Trump supporters stormed the US Capitol building as, according to reports, some were looking to "hang" the former VP, who oversaw the congressional confirmation of Joe Biden's presidential election victory.

“He spoke very favourably about his relationship with President Trump. I got the sense they speak often and maintain the same personal friendship and relationship now that they have for four years”, Banks said.

© AP Photo / Andrew Harnik
Patriot or P**sy? Trump Reportedly Name-Called Pence When Pressuring VP to Object to Election Result
Pence and Trump have reportedly spoken twice since Biden's 20 January ascension to the White House, with an unnamed source describing their relationship as “amicable”.

The former vice president, however, declined an invitation to speak at last month’s Conservative Political Action Conference (CPAC) meeting in Florida, where Trump delivered a keynote speech, dropping hints, in particular, that he might join the 2024 presidential race.