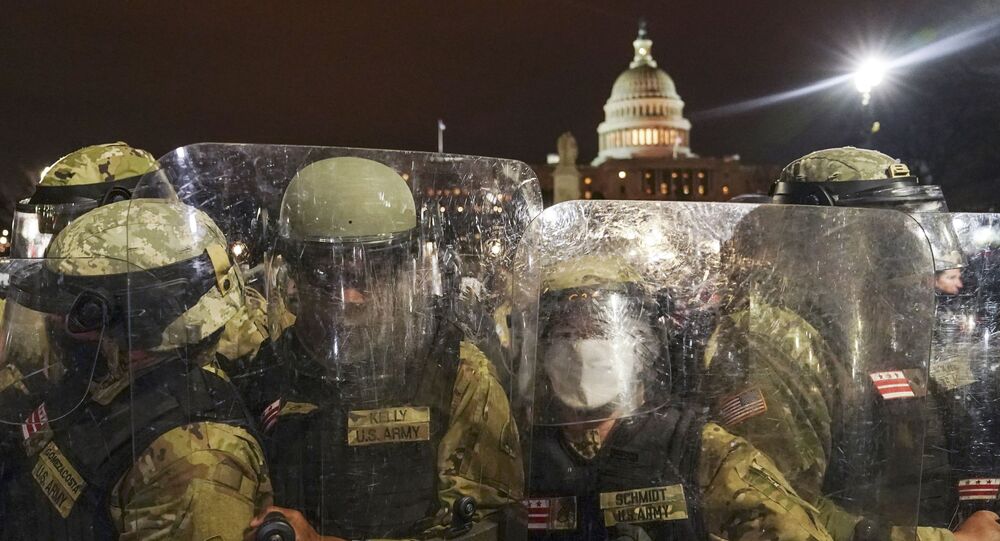 On 5 March, the Capitol Police requested that National Guard troops continue to provide protection for the next two month, The Associated Press reported, citing concerns over security and potential for violence at the Capitol. But is the threat real?

In the first week of March the US Capitol Police beefed up security at the congressional premises in Washington and informed US lawmakers that they had "obtained intelligence that shows a possible plot to breach the Capitol by an identified militia group on Thursday."

"We have already made significant security upgrades to include establishing a physical structure and increasing manpower to ensure the protection of Congress, the public and our police officers," the police said in a statement, stressing that "due to the sensitive nature of this information," the police could not provide additional details. The worrying report prompted the House of Representatives to cancel its Thursday session as a precaution.

How Spectre of Right-Wing Extremism Repeatedly Failed to Materialise

Following the 6 January Capitol breach the US capital has been bracing for the uptick in right-wing violence for the last two months. On 10 January, an FBI bulletin warned that "armed protests are being planned at all 50 state capitols from 16 January through at least 20 January." To tackle the threat the Capitol was encircled by a seven-foot-high fence and the general public was denied access to Joe Biden's inauguration.

Today is such a beautiful, if cold, day in DC. Normally I might take nice run around the Capitol. Sadly, a giant fence has turned our beautiful Capitol grounds, used by many, into an impenetrable fortress. It is time for the walls to come down. pic.twitter.com/6FknJrqtIX

​After Capitol Hill and the rest of the country got through Inauguration Day without incident, the Department of Homeland Security raised yet another red flag. On 27 January, the DHS issued its first-ever national terrorism bulletin concerning the looming threat of violent domestic extremism supposedly emboldened by the DC riots.

While covering the DHS's bulletin, US investigative reporter Catherine Herridge remarked in a tweet that earlier "CBS News had learned" that "Homeland Security does not have intelligence about specific, credible plotting."

Meanwhile, in early February, the US mainstream press started discussing a "QAnon" conspiracy theory saying that former President Donald Trump would be "sworn-in" again on 4 March 2021 and return to power. As the "doomsday" neared, the media narrative was getting gloomier, writes Glenn Greenwald, American journalist, author, and former attorney in his latest blog post.

"Do you know what happened on March 4 when it came to violence from right-wing extremists?" asks Greenwald. "The same thing that happened on January 20: absolutely nothing. There were no attempted attacks on the Capitol, state capitols, or any other government institution."

This is how many people showed up to the Capitol today pic.twitter.com/QrvudChm5Y

​The US press enthusiasm over the event puzzled even the so-called QAnon followers who described 4 March in their chats as "a 'false flag' constructed by mainstream news organisations and internal double agents to deceive true QAnon proponents."

"March 4 is a Trap! Q knew," one individual wrote, as quoted by Newsweek, while another echoed: "Anything/anyone hyping March 4 is suspect."

A QAnon influencer yesterday denounced the March 4 conspiracy theory -- which has taken hold among much of the QAnon community since Biden's inauguration -- calling it "planned disinfo" & "nonsense theories." https://t.co/4BgfXgVR75 pic.twitter.com/L7fXiItrKe

​Nevertheless, Newsweek, The Washington Post, and Business Insider reporters are now floating the idea that the QAnon march may take place on 20 March, citing a man named Ken and some random "Telegram subscriber."

The narrative about the QAnon cult and right-wing "domestic terrorism" appears to be over-exaggerated, Greenwald insists. He lambasts the Dems' attempts to depict the DC protests as "armed insurrection," citing the fact that no shots were fired by the "Trump mob" in the Capitol building and that "the FBI seized a grand total of zero firearms from those it arrested" on 6 January.

The media fuss over the purported threat of right-wing insurrection is a pretext for cracking down on the US establishment's political rivals, notes Techno Fog, a nom de plume for a US lawyer and writer, in his blog.

The Capitol protests have already been instrumentalised by the Dems for proposing a "domestic terrorism" bill and kicking off a 9/11-type Commission to look into the DC protests.

Currently, over 5,000 National Guard troops, along with fencing and razor wire, protect DC against a threat that doesn't exist.

The occupation is theater to make January 6 more than what it was to justify what is to come.

​The lawyer does not rule out that in parallel with the official investigation Democratic politicians will resort to misrepresentations of facts, inaccurate leaks and attacks against conservatives – as they did during the two-year long Special Counsel Robert Mueller probe into the alleged "Trump-Russia collusion" which finally turned out to be a big nothing burger.

Meanwhile, the "Russia Did It" narrative is already at play with Democrat Congresswoman Carolyn Maloney accusing Parler, a conservative social media platform, of "facilitating Russia’s campaign to sow chaos in the American electorate", in February 2021.

The writer believes that the Democrats will go further by targeting conservative groups, their donors and even communications under the guise of the 9/11-style commission investigations.

"If you question the seriousness of the game they’re playing, just look at the security around the Capitol," the writer notes. "Currently, over 5,000 National Guard troops, along with fencing and razor wire, protect against a non-existent threat."