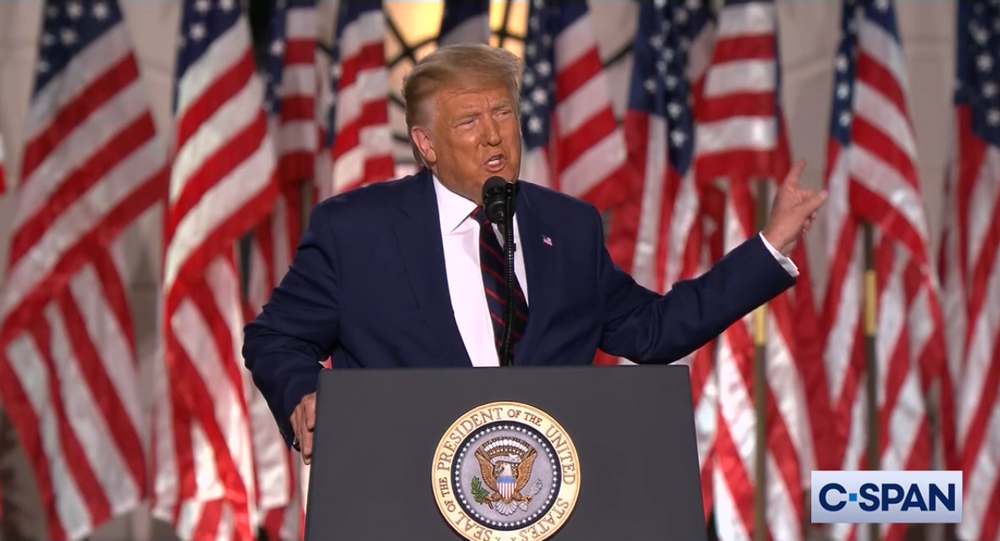 Returning to the spotlight for the first time since departing the White House on 20 January, Donald Trump teased a 2024 presidential run at the Conservative Political Action Conference (CPAC), predicting that "a Republican president will make a triumphant return to the White House."

While current data shows that former president Donald Trump remains the most popular figure among Republican voters in the US, a survey by a GOP pollster points to former Vice President Mike Pence and Florida Governor Ron DeSantis as the potential early favorites among White House hopefuls.

A national survey conducted between 20 February and 2 March, 2021 using a sample of 1,264 voters either registered as Republicans or affiliated with the party, by veteran GOP pollster Tony Fabrizio found that slightly more than half would support Trump if the 2024 primary were held today.

"To get a majority of the vote in the face of 14 or 15 other candidates – that’s huge. In my survey there wasn’t a single other person who broke into double digits. … After everything that’s occurred, it’s a hugely strong position for the former president to be in," said Fabrizio.

However, the survey by Fabrizio showed that if Trump were to be taken out of the equation in a hypothetical 2024 GOP presidential nomination matchup, Florida Gov. Ron DeSantis and former Vice President Mike Pence would be tied with 22 percent each, with Texas Sen. Ted Cruz coming in a close third, with 19 percent.

Tony Fabrizio was cited as anticipating Pence and Cruz to top the list.

"Mike Pence was vice president for four years. Ted Cruz ran for president once and certainly has gotten a lot of attention as of late," underscored Fabrizio.

Mike Pence has remained under the radar since leaving office, after Trump had pressured him to overturn the 2020 election results during the congressional certification process.

However, the pollster voiced surprise at the strong polling shown by DeSantis.

​“He’s only been governor for two years. He doesn’t have length of service or national profile for years that the other two gentlemen have had for years. But he has turned that clubhouse turn, if you will.. and has pulled even with them as a tier one contender," said the pollster, as cited by Fox News.

First-term governor DeSantis had earlier topped a second straw poll at CPAC that didn’t include Trump, raking in 43 percent of support in the hypothetical nomination.

Commenting on the recent data, veteran GOP pollster Neil Newhouse, who worked on the 2016 campaign and the 2020 reelection effort of former President Donald Trump, was cited by the outlet as acknowledging that the 45th president of the US would be an overwhelming favourite if he were to announce a 2024 White House bid.

"I think the elephant in the room is obviously Donald Trump. If the election were held today and if he wants the nomination, he’d be the odds-on favourite," said Newhouse.

As he addressed the Conservative Political Action Conference (CPAC) on 28 February in Orlando, Florida, Donald Trump predicted that in 2024 "a Republican president will make a triumphant return to the White House."
"I wonder who that will be?" teased Trump.

Further on in the speech Trump reiterated claims he won last November’s presidential election, adding a dig aimed at the Democrats:

"…Who knows … I may even decide to beat them a third time."

​Following his speech, Trump extolled his showing in the CPAC secret ballot straw poll, where 97 percent of those voting said they approved of Donald Trump’s performance as president, and 95 percent said they wanted the Republican Party to continue to advance Trump’s agenda.

​In an interview released on 1 March for Newsmax's Mark Halpern, Donald Trump stated he didn’t believe any Republican would be able to beat him if he ran for president again in 2024.

"I can't imagine it if I decide to do that — I haven't decided to do that…I've done a good job for this party… I think based on the job performance, I'm not sure that anybody should be able to win other than us," said the former president.