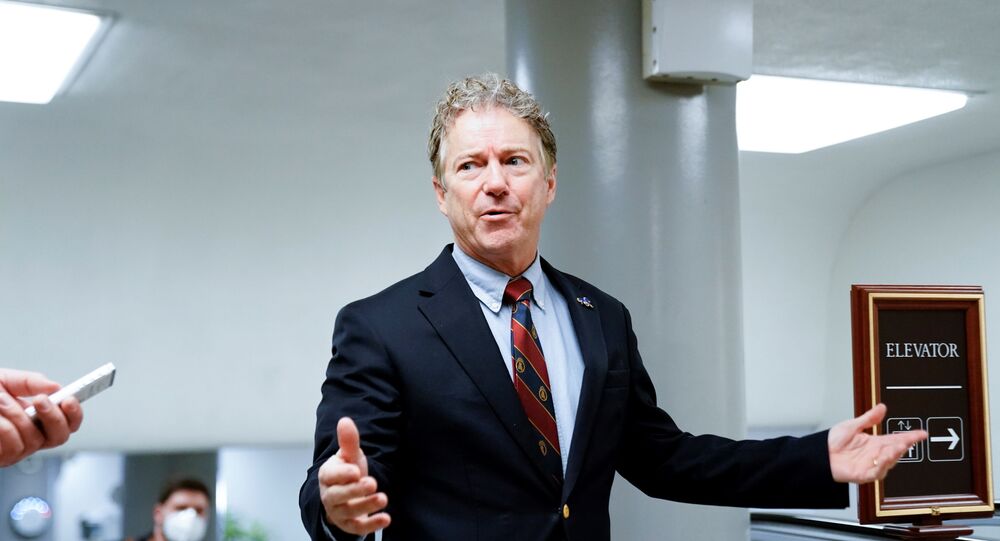 The senator says that the House-passed relief package would make single Planned Parenthood locations treated as "separate and distinct entities" rendering them eligible for federal assistance under the Paycheck Protection Program, aimed originally at granting checks for small businesses.

Republican Senator Rand Paul said that he was "successful" in preventing a clause in the Senate coronavirus relief bill that would offer Paycheck Protection Program (PPP) assistance to Planned Parenthoods around the country.

According to the statement, he "forced" Democrats to withdraw a provision that would have permitted any Planned Parenthood in the US to obtain funds through the PPP, which "was always intended for small businesses."

“Democrats knew this was never about COVID relief or helping small businesses,” Paul said in a statement issued Friday. “It was a shameless attempt to fund their radical agenda on the taxpayers’ backs and I was successful in preventing that from happening by stopping these funds from going to abortion mills.”

Dems knew this wasn’t about COVID relief/helping small businesses. Shameless attempt to fund their radical agenda & @PPFA on the taxpayers’ backs. I was successful in preventing that from happening by stopping these funds to abortion mills. Read more: https://t.co/K37N8cIYl5

Thank you, @RandPaul! This is a huge victory for countless human lives that will be saved from the violence of abortion and the evil of facilities like Planned Parenthood. https://t.co/EBM2xFz5Fc

Did you know the Dems $1.9 TRILLION liberal wish-list would send PPP funds to PLANNED PARENTHOOD?

Well, not anymore thanks to @RandPaul! When small businesses are struggling, taxpayer money should not be going to abortion mills! #KYSen https://t.co/SnOb6vbwcp

​"Thank you @RandPaul for continuing to fight Democrats’ attempts to allow the nation's largest abortion business Planned Parenthood to receive #COVID19 PPP loans which are intended for small businesses," anti-abortion organization Susan B. Anthony List tweeted in regard to the decision. "PP has $1.6B annual revenue & receives $500M+ tax dollars per year already."

Yes!!! Abortion has turned into irresponsible and sad behavior because putting a condom on is not seen as the empowering narrative

Senator Paul is one of the few in Washington with the courage to defend the citizens from the atrocities being committed by the Left.

Another pro-life organization, Students for Life Action, also congratulated Paul on his effort.

"VICTORY! @RandPaul, for your leadership and preventing our taxpayer dollars from funding the violence of abortion," it wrote in a Twitter post.

On the other side of the political spectrum, netizens noted that Planned Parenthood deals with a much wider range of issues than abortion, and the decision of the Senate under the efforts of Paul is an interference with the personal freedom of women to decide what to do with their bodies.

Abortion is legal. Rand Paul shouldn't get to dictate who can and cant recieve PPP bases on his religious beliefs. Separation of church and state, remember?

"​@RandPaul is proud of denying funding for women's health care PPP provides to women who cannot afford to go to a doctor. This has zero to do with abortion. His victory hurts women," one of the users wrote.

They assist with women’s health needs like yearly exams, birth control and other needs not related to abortion.

​"Planned Parenthood does more than abort babies. But, what do I know! Rand is the know it all about everything. So he thinks," one woman said in response to Rand's action.

Abortion has been a hotly debated issue in the US for years. Under former President Donald Trump, the country introduced several measures meant to block, restrict or repeal pro-abortion laws, and cut federal funding for abortion clinics.

After President Joe Biden assumed office, his administration revealed an agenda that would reverse the policies taken by former administrations, including rescinding the regulation that banned the use of US aid money to fund abortions abroad, also known as the "Mexico City Policy."

At the same time, some Republicans and pro-life activists have slammed Biden - who identifies as a Catholic man - over supporting abortion and reproductive rights, which church representatives tend to oppose.

Over the weekend, House approved a $1.9 trillion COVID-19 relief bill, sending the huge package to the Senate as lawmakers scramble to provide a new round of assistance before key unemployment programs expire.

The aforementioned PPP is a $953 billion business loan program created by the government in 2020 to assist those companies, self-employed workers, sole proprietors, nonprofit organizations, and tribal businesses in continuing to pay their employees. The program received a certain amount of criticism, since, according to claims, it did not save many jobs and primarily benefited companies that were not in danger of going out of business.