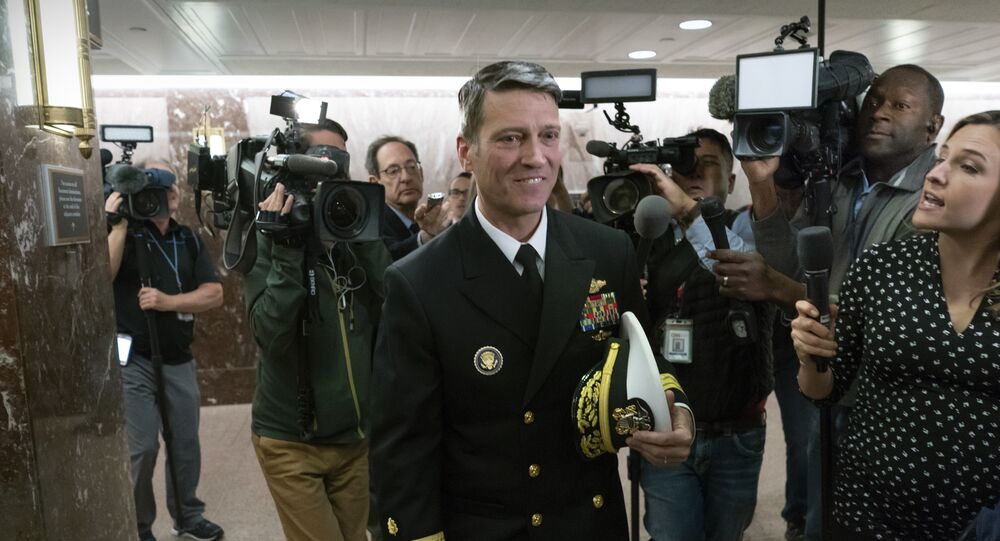 The Pentagon’s Inspector General has been carrying out a years-long probe into Ronny Jackson, who currently represents Texas in the House of Representatives, and examined allegations dating to his time serving during the Barack Obama and Donald Trump administrations.

The Department of Defense (DoD) is to reveal in its forthcoming report that Rep. Ronny Jackson’s (R-Texas) tenure in the White House as physician during the Obama and Trump administrations was marred by “yelling, screaming, cursing, or belittling subordinates” that created a “hostile environment”.

According to an advance copy of the report from the Pentagon’s inspector general, cited by CNN, Jackson made "sexual and denigrating" comments about a female colleague, abused protocol by drinking alcohol during presidential trips, and over-indulged in prescription-strength sleeping medication.

​Interviewed for the report, at least six people claimed that while on duty during lengthy flights Jackson took Ambien, known for its side effects, such as drowsiness and reduced alertness, writes the outlet.

The behaviour of the physician, who now sits on the House Armed Services subcommittee overseeing military personnel, reportedly left staffers concerned whether Jackson would be able adequately carry out his duties at the White House.

The report, which is a culmination of an investigation that launched in 2018, alleges that a fiery-tempered Jackson was seen drinking during a visit to Manila, capital of the Philippines, from 22 April 2014, to 29 April 2014, leading the supposedly intoxicated staffer to let loose some ‘inappropriate’ remarks about a female colleague subordinate to him.

A witness claimed Jackson began drinking in the hotel lobby after arrival in Manila, and later got into a car with a drink in his hand "to go out on the town".

At the hotel later another witness claimed seeing Jackson "pounding" on the door of a female subordinate's room, and shouting, "I need you to come to my room."

Similar incidents reportedly occurred during other trips as well.

There has not yet been any official comment from the Pentagon’s inspector general.

The outlet quotes Jackson, who retired from the Navy in 2019 and won his Texas House seat last year, as denouncing the report as an attempt by Democrats to tarnish his reputation.

"I'm proud of the work environment I fostered under three different Presidents of both parties; I take my professional responsibility with respect to prescription drug practices seriously; and I flat out reject any allegation that I consumed alcohol while on duty," Jackson said.

My entire professional life has been defined by duty and service. I've honorably served my country in the U.S. Navy, served patients who trusted me with their care, served three Presidents in the White House, and now I serve the people of Texas' 13th District in Congress. (5/6)

​According to the retired Navy rear admiral, who is the US representative for Texas’s 13th congressional district, the inspector general "resurrected" throwback allegations against him because he refused to "turn my back on President (Donald) Trump", who was a vocal supporter of his 2020 congressional bid.

Check out my speech at @CPAC today. We MUST defend our healthcare industry from the destruction of the radical Left. They will make it worse for EVERYONE! pic.twitter.com/pnVFEOlaru

​Jackson, who according to two defence officials cited by CNN could now face a Navy review of his retirement pay, has vehemently denied he had ever “consumed alcohol while on duty".