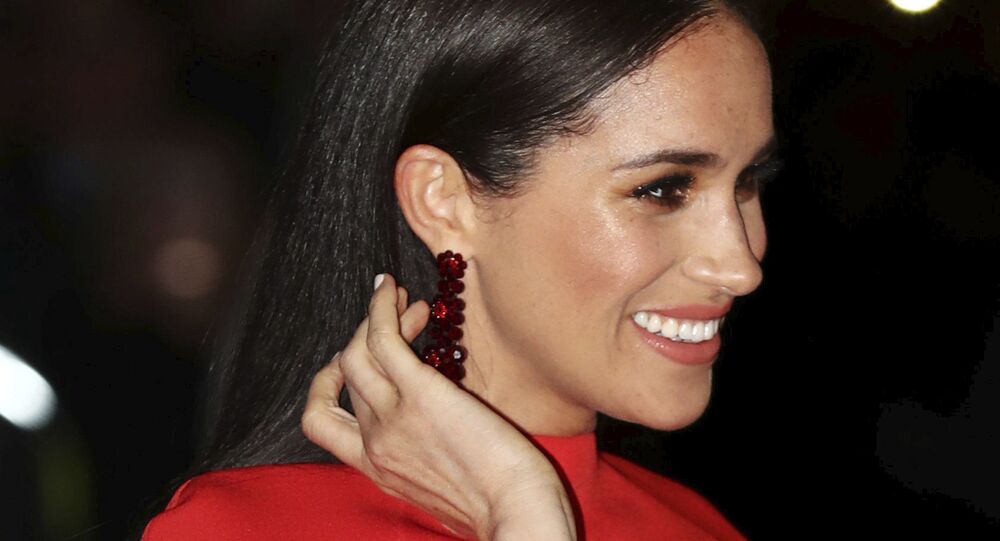 Comparisons have been drawn between Meghan Markle and Wallis Simpson - Duchess of Windsor - as both American divorcees married British royals, who subsequently relinquished their royal duties, prompted by their romantic relationships.

For the sit-down, to be broadcast on Sunday, 7 March, Meghan Markle didn’t skimp on dark eyeliner, either, with make-up that was reminiscent of her late mother-in-law, Princess Diana.

Mark your Calendars and grab your popcorns for Sunday March 7 as Prince Harry and Meghan Markle will be sitting down with Oprah Winfrey for a CBS TV primetime interview.

The conversation is expected to cover everything from their marriage to baby Archie & what life's been like. pic.twitter.com/ovr4nubmqz

​Prince Harry’s spouse also paid tribute to Princess Di with a Cartier diamond tennis bracelet, worth $25,000, from the royal’s jewellery collection, said to have been a gift to Meghan Markle from Prince Harry dating back to the outset of their romance.

The Duke and Duchess of Windsor also had earlier versions of the Cartier “Love Bracelet”.

The 39-year-old Markle, who is pregnant with her second baby, is seen in clips broadcast during the US TV show "60 Minutes” wearing a black, long-sleeved dress by Armani which reportedly retails for $4,700 belted above her stomach, and featuring a floral embroidery design over one shoulder.

The centre-parted hairstyle, with a low bun, that Meghan Markle chose to wear her long dark hair in for the interview was seen by many as dramatically similar to how Wallis Simpson looks in a portrait dated 1936, prior to her marriage to King Edward VIII.

The twice-divorcee who became the wife of the Duke of Windsor triggered a constitutional crisis that resulted in the former British king Edward VIII's abdication in December 1936 to marry "the woman I love".

Viewers, however, were quick to zoom in on certain subtle differences in the outfits of the two Americans women, with Wallis's short-sleeved dress noticeably covered throughout with a floral pattern.

To round off the outfit, Meghan Markle selected $750 shoes from one of her favoured designers – Aquazurra.

On social media, many weighed in on the fact that Meghan Markle seemed to be ‘borrowing’ Diana’s look.

My initial thoughts were that Meghan is borrowing Diana’s look with the black outfit & heavy heavy eyeliner. And she seems to have styled her hair like Wallis Simpson(!). It’s very heavy-handed makeup for this natural setting eek pic.twitter.com/5VGOUliH15

It is rather uncanny. pic.twitter.com/gwBaKbzl2Y

I think she's doing it deliberately she most probably admires her!!

She married the spare, not the heir - second fiddle was never a role Meghan, an actress forever searching for centre stage, would be prepared to play. it is not hunted divorcée Diana, but divisive divorcée Wallis Simpson, splitting the House of Windsor into competing factions.

Idk does no one else feel the serious Wallis Simpson vibe coming off Meghan in that trailer. I think, sadly, history is repeating itself, Harry - just not the one you expected. Nothing against H&M at all, but once the RF have turned against you all hope is lost.

Wallis reincarnated and getting revenge?

Meghan's stiff posture is the spitting image of the Duchess of Windsor - surely deliberate??https://t.co/MadMlxyYGy

Twice-married socialite Wallis Simpson embarked upon a scandalous relationship with Edward, Prince of Wales, in the mid-1930s.

After briefly ascending the throne as King Edward VIII, the romance led the royal to abdicate the British throne in December 1936 to enable him to marry the divorcee.

© AFP 2021 / DAN HIMBRECHTS
(FILES) In this file photo Britain's Prince Harry and wife Meghan arrive for a public walk at the Sydney Opera House in Sydney on October 16, 2018

In a recent interview to TV host James Corden, Prince Harry yet again blamed the “toxic” environment in the UK and attacks by the British press on him and his wife for the move to quit his duties as a senior royal.

As the two trailers vowing "shocking" royal revelations hit the screens they showed Prince Harry seated with his pregnant wife in what has been claimed to be the garden of their £11 million Montecito home in Santa Barbara.

"I'm just really relieved and happy to be sitting here talking to you with my wife by my side because I can't begin to imagine what it must have been like for her going through this process by herself all those years ago", says the Duke of Sussex in the trailer.

Earlier in the year Prince Harry and Meghan Markle confirmed that they would not be returning to the UK as working royals, in a decision that has “saddened” everyone in the Royal Family, Buckingham Palace said.