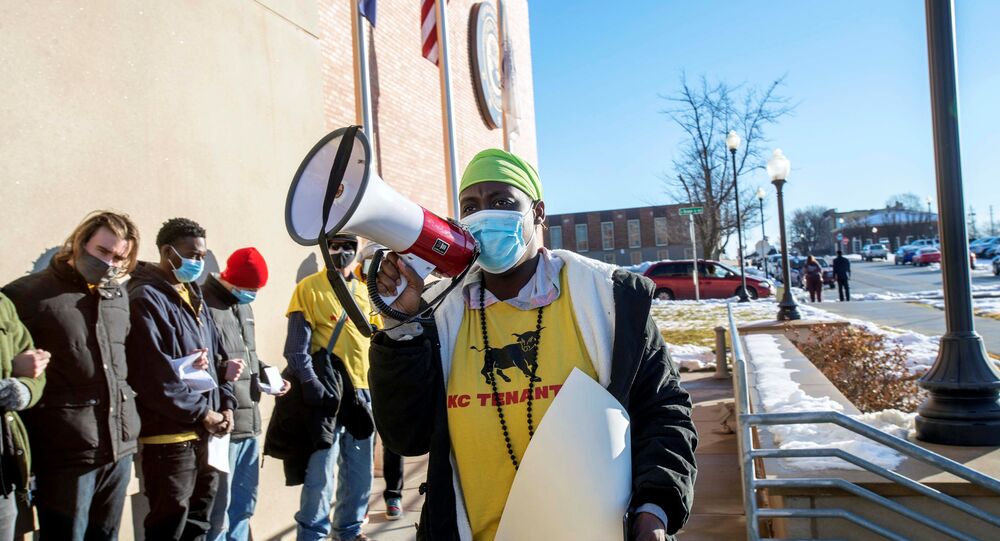 US District Judge J. Campbell Barker ruled on Thursday that the federal Centres for Disease Control and Prevention had breached the constitution by enforcing a moratorium on evictions announced by the former US president, Donald Trump, last year.

The US Department of Justice has said it will appeal a court ruling against a moratorium on home evictions during the COVID-19 pandemic.

The department filed its notice of appeal on Saturday evening on a ruling against the US Centres for Disease Control and Prevention (CDC), a federal agency under the auspices of the Department of Health.

In his submission, Acting Assistant Attorney General Brian Boynton claimed that the ruling only applied to the parties in the case — implying it did not set legal precedent. He argued that the CDC eviction moratorium, announced September 2020 by the administration of the former US president, Donald Trump, and extended by Congress in December 2020, has both wide social and health benefits.

© Sputnik
DC & Federal Courts Look to Restart Evictions Amid Homeless Crisis
“The CDC’s eviction moratorium, which Congress extended last December, protects many renters who cannot make their monthly payments due to job loss or health care expenses,” he said. “By preventing people from becoming homeless or having to move into more-crowded housing, the moratorium helps to slow the spread of COVID-19.”

Texas-based US District Judge J. Campbell Barker, a Trump appointee, on Thursday ruled in favour of a group of landlords and property owners who complained that the CDC order was in breach of two constitutional provisions.

“Although the COVID-19 pandemic persists, so does the Constitution,” Barker wrote. “The federal government cannot say that it has ever before invoked its power over interstate commerce to impose a residential eviction moratorium.”

“It did not do so during the deadly Spanish Flu pandemic. Nor did it invoke such a power during the exigencies of the Great Depression," Barker stated. "The federal government has not claimed such a power at any point during our nation’s history until last year.”

Current government protections from eviction are open to any individual earning less than $99,000 per year, or $198,000 or less for couples — as long as they can show they have sought government help to pay their rent, and cannot pay due to hardship caused by the coronavirus pandemic, while concurrently declaring that they are likely to become homeless if evicted.

Last month, another US federal judge in Texas, Drew Tipton, ruled that US President Joe Biden's order of a 100-day freeze on deportations of illegal immigrants was unlawful.

Biden’s COVID Relief Plan: Who Will Be Allowed to Get $1,400 Stimulus Check?

Damn You, 2020! US Centres For Disease Control and Prevention Thinks Zombie Apocalypse is Possible