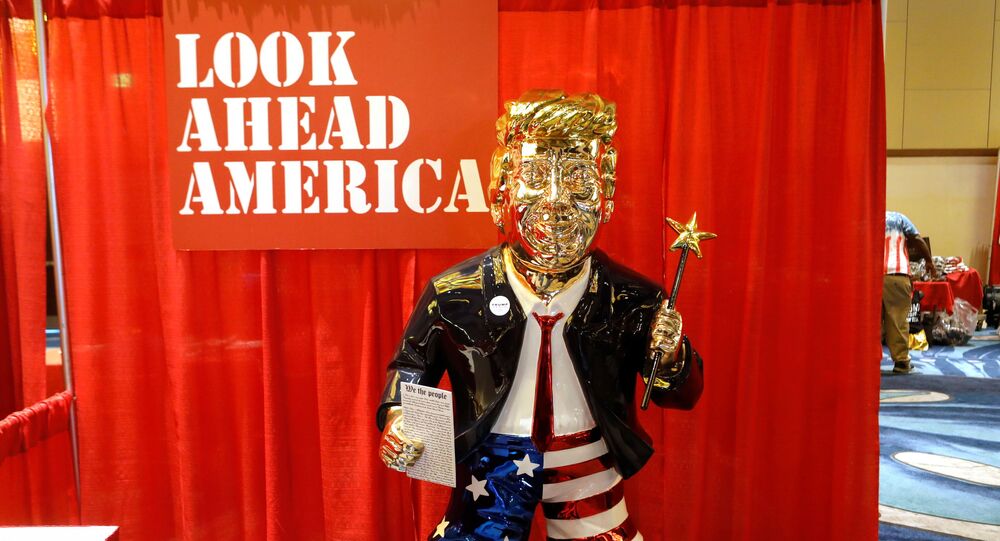 Despite the event focusing mostly on serious political issues like "how Democrats are going to ruin the US" and "how the GOP will win back the country in 2022/2024", its speakers managed to liven up their addresses with jokes, colourful parallels, and edgy humour. Here is how CPAC has entertained its visitors (and netizens) so far.

There was little doubt that this year's CPAC (Conservative Political Action Conference) would mostly be about Donald Trump, his legacy in the GOP, and his future in the party after news emerged that the ex-POTUS would be delivering his first public address since leaving office at the major conservative event on 28 February.

The last sliver of doubt vanished with the emergence of a video of a golden statue of former US President Donald Trump being rolled through the halls of the CPAC venue. The statue was wearing shorts emblazoned with the American flag, and carrying what looked like a replica of the US Constitution in one hand and a magic wand in the other (apparently instead of a phone, since Trump has been banned from Twitter anyway).

So, it was no surprise when the president's son, Donald Trump Jr, jokingly called the event "TPAC", hinting that his father had essentially become the face of the new American conservatives. The ex-president's son soon turned to more mundane matters though, such as criticising the Joe Biden administration's first decisions and Trump's opponents within the GOP.

He specifically targeted House Republican Liz Cheney, who voted to impeach Trump, claiming that she is "only slightly less popular than her father is at a quail hunt", apparently referring to a 2006 incident when former Vice President Dick Cheney accidentally shot his hunting partner in the face.

When the Republicans attending CPAC were not talking about Trump's legacy and RINOs (Republicans In Name Only) in the GOP, they were lambasting the Democrats and the course they have selected for the country. Texas Senator Ted Cruz arguably perfected the topic, comparing Joe Biden's administration to the Galactic Empire in Star Wars, with the role of Darth Vader and the Emperor apparently reserved for the POTUS and Vice President Kamala Harris. The Republican Party, in turn, were the Rebels fighting the Empire of the Democrats, in Cruz's view.

The Texas senator went on to appropriate and repurpose the famous phrase "basket of deplorables" that Trump's political opponent Hillary Clinton used during her unsuccessful 2016 campaign to describe the then-Republican candidate's supporters, who eventually voted for him to be president. Cruz stressed that despite the Democrats' efforts, the "deplorables are here to stay", apparently hinting at an imminent GOP comeback.

Despite his high-energy speech at CPAC, some of Ted Cruz's remarks and humour raised a lot of eyebrows, especially as he tried to joke about his departure from the storm-hit Texas for a week-long vacation with his family in Cancun, Mexico.

Sen. Ted Cruz at CPAC: "Orlando is awesome. It's not as nice as Cancun."pic.twitter.com/TghkHUhOPy

No less controversial was his comment regarding the mask-wearing practice advised by international and most US health bodies since the pandemic started. Cruz suggested that masks are here to stay for hundreds of years and, oddly, joked about health experts' recent suggestions that one mask is not enough.

"We're going to wear masks for the next 300 years. And by the way, not just one mask — two, three, four — you can't have too many masks. How much virtue do you want to signal?" Ted Cruz asked.

Liz Cheney was not the only one that suffered ostracism during the 2021 CPAC, with Utah Senator Mitt Romney, who voted to convict Trump in both impeachment processes, not being spared either. Former GOP House member from Utah Jason Chaffetz openly criticised the senator, calling him something possibly even more derogatory than RINO.

"My name is Jason Chaffetz. I'm from Utah, and I am not Mitt Romney. If you're looking for Pierre Delecto [Twitter handle of Romney's burner account] you need to go down the hall, go left and then just keep going left until... well, just keep going left. That's where you'll find him", the ex-House member joked.