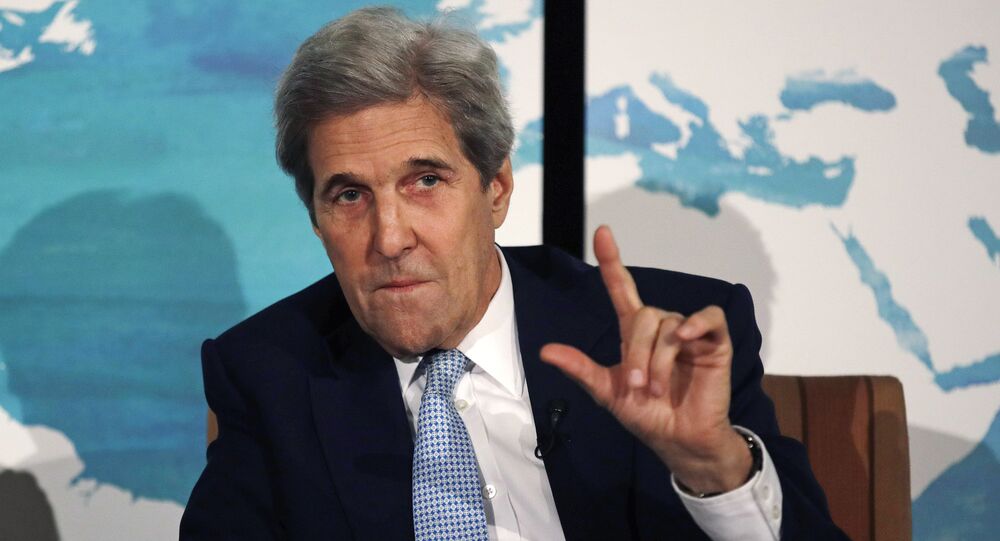 Former Obama administration cabinet members continued to maintain ties with the Iranian government during Donald Trump's tenure, The Washington Times reported on Monday, arguing that this amounted to a "flagrant violation of the Logan Act", something which the Democrats tried to use against Trump's National Security Adviser Gen. Mike Flynn.

Citing a former senior US official, The Washington Times revealed that Iranian Foreign Minister Javad Zarif held meetings with Obama's former Secretary of State John Kerry and other officials "throughout the Trump years, in 2017, 2018 and 2019." The underlying goals of these meetings were to "devise a political strategy to undermine the Trump administration", the official presumed, as quoted by the media.

"The pro-West liberal Iranians led by Zarif and Rouhani naturally stayed in touch with their Obama Administration counterparts in hopes that the Trump era would end," says Kevin Barrett, an Arabist-Islamologist scholar and professor at the University of Wisconsin-Madison.

​It did not affect the relationship, because there is absolutely no way that Iran could possibly have any meaningful negotiations or dealings with Mike Pompeo or John Bolton, the scholar believes.

Obama veterans' effort to maintain ties with Tehran to some extent buffered the Trump administration's tough approach toward the Islamic Republic, including its unilateral withdrawal from the 2015 Joint Comprehensive Plan of Action and the drone killing of Qasem Soleimani, commander of the Quds Force, in January 2020, according to Barrett.

Still, the professor has no illusions with regard to the Democratic Party's objectives in the region, stressing that both parties dragged the Middle East into a longstanding crisis with the Dems "hav[ing] only been slightly better" than their political rivals.

​The Washington Times presumes that the diplomatic efforts pursued by former Obama officials were intended to lay the foundation for a future Democratic administration that would repair relations with Iran and revive the nuclear agreement.

Report from 2018 said Kerry engaged in 'shadow diplomacy' to save Iran deal https://t.co/A0RGh7eHHh

​The "behind-the-scenes" interference in Trump's Iran policies was nothing short of a "treasonous act", argues Feierstein, adding that the left-leaning media is trying to downplay this by using the euphemism "shadow diplomacy". Veterans of the Obama administration cabinet apparently signalled to Iran that Trump may have no second term, urging Tehran to be patient, he suggests.

Will Biden Strike a Better Deal With Iran?

Meanwhile, President Joe Biden has made it clear that he will seek to resume the Iran nuclear deal. On Monday, Secretary of State Anthony Blinken reaffirmed Washington's willingness to return to the 2015 JCPOA and to work with allies and partners to “lengthen and strengthen” the accords. However, "the Biden administration’s early efforts to resurrect the 2015 Iran nuclear deal are getting a chilly early response from Tehran," Associated Press noted on 23 February.

​The White House has found itself in a no-wins situation, according to the media outlet: either "move ahead with sanctions relief before Iran resumes full compliance and risk losing the leverage it has" or "double down on demands for full compliance first and risk Tehran walking away from the deal completely".

At the same time, US conservatives are signalling their discontent with Biden's handling of the Iran nuclear issue: as Mark Dubowitz, CEO of the Foundation for Defense of Democracies noted in his recent op-ed for NBC News, the new administration's strategy "clearly involves making upfront concessions to Tehran for nothing in return": "Biden’s approach draws directly from Obama’s playbook: turning a blind eye to regional aggression and offering economic relief to signal support for engagement," argues the scholar.

One might wonder as to how diametrically opposite partisan approaches to Iran and other political matters may affect the US ability to come up with a comprehensive strategy.

"A two-party system does not exist; it's fantasy," says Feierstein. "The US is an oligarchy and Trump was an outsider. There never was a 'smooth transition of power' when Obama left the White House."

De facto Obama "maintained a close grip on power, and had Democratic operatives along with their media partners undermine Trump and his administration at every twist and turn", according to the businessman.

While Feierstein does not believe that Biden could strike a good deal with Iran, which would prevent the Islamic Republic from obtaining nuclear weapons, Kevin Barrett suggests that Washington should be held responsible for its "atrocities against the Islamic Republic" and should eventually leave the Middle Eastern region in peace.

US Insists That Iran Cooperate With IAEA Without Delay