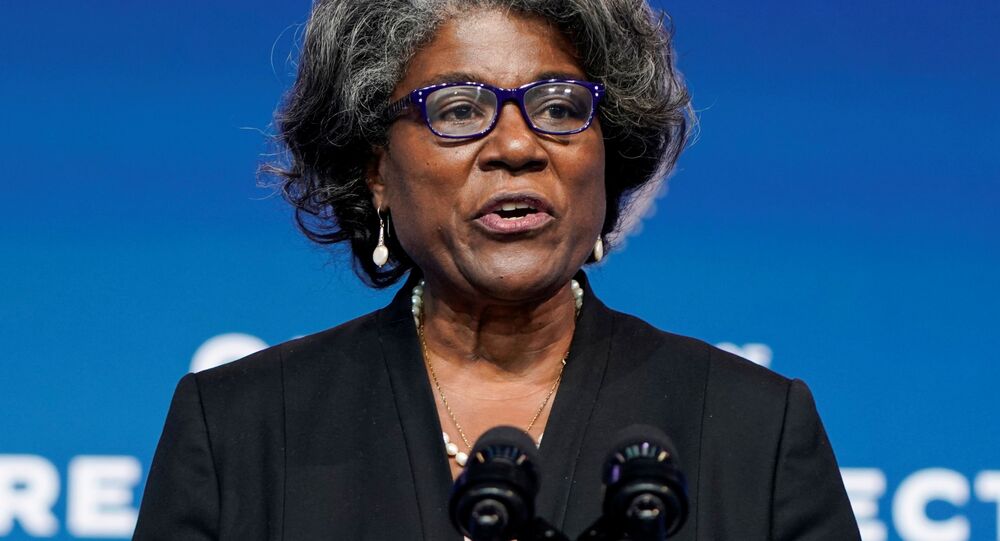 Senate Confirms Linda Thomas-Greenfield as US Envoy to United Nations

Linda Thomas-Greenfield, former assistant secretary of state for African affairs in the US Department of State's Bureau of African Affairs, previously drew criticism from Republican senators who accused her of "cheerleading" and "embracing the Chinese Communist Party" after she referred to Beijing as a "strategic adversary."

With a Tuesday afternoon vote of 78-20, the US Senate voted to confirm Thomas-Greenfield as the new US ambassador to the United Nations.

Thomas-Greenfield, who began working under the State Department almost 40 years ago, delivered remarks last month stating that, if confirmed, she would engage in "people-to-people diplomacy" to counter China's so-called global agenda.

"When America shows up — when we are consistent and persistent — when we exert our influence in accordance with our values — the United Nations can be an indispensable institution for advancing peace, security, and our collective well-being," she said in a written statement read aloud during the January 27 confirmation hearing before the Senate Foreign Affairs Committee.

Her provided stance appeared to align with US President Joe Biden's commitment to rebuilding relationships and agreements lost in recent years. Within the past several weeks, the US president has rejoined the Paris Agreement, UN Human Rights Council and UN World Health Organization, which former US President Donald Trump withdrew the US from just last year.

China's $1 trillion 'One Belt, One Road' initiative, which seeks to deepen economic relations between Asia, Africa and Europe, as "a win-win-win situation" for the US during a 2019 speech at Savannah State University’s Confucius Institute.

She also testified during a 2019 US House Foreign Affairs Subcommittee on Africa, Global Health, Global Human Rights and International Organizations hearing that the US role in Africa is "to ensure that they have the capacity to strike and negotiate better deals with the Chinese."

The Senate confirms Linda Thomas-Greenfield as U.S. ambassador to U.N. in a 78-20 vote, amid scrutiny of past remarks praising China’s approach in Africa.pic.twitter.com/9rAoVDlSJX

Republican Sens. Ted Cruz (R-TX) and Ron Johnson (R-WI) pressed the US diplomat on her remarks regarding Beijing, with the latter lawmaker asking for her opinion on why the US and China have not officially entered into a new Cold War.

Thomas-Greenfield described China as a "strategic adversary" whose ruling party is a threat to the values and security of the US and its neighbors. She emphasized that in her speech, she was speaking of the importance to preserving the US influence in Africa while being realistic about deals between Beijing and African nations.

She noted that Africa was previously "sort of a pawn in the Cold War, and my conversation there was to say that Africans can no longer allow themselves to be a pawn."

Cruz stated there was increasing concern over “a pattern of Biden administration nominees of consistently moving towards and embracing the Chinese Communist Party.”

"This speech is cheerleading for the Chinese Communist Party," the Texas senator argued, referring to her 2019 statements.

"It was not my intention, nor do I think that I cheered on the Chinese Communist Party," she replied. "This is one speech in my 35-year career, and I do regret that speech."

'It's Time for Boldness': Biden Calls on Nation to Unite Against Challenges in First Speech as POTUS