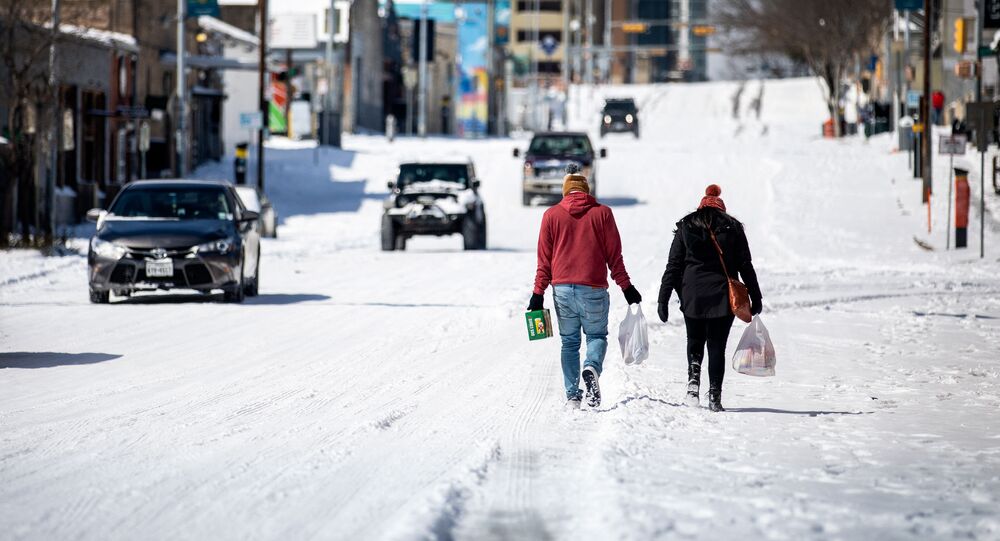 President Joe Biden appears to be hesitant to visit Texas, a red state which has faced a historic and deadly snowstorm. Observers have explained why Texans are not a number one priority on Biden's to-do list.

On 20 February, Joe Biden approved the Texas Disaster Declaration, one week after a severe winter storm left millions of Texans without electricity, heat, and water, and killed at least two dozen people in the state. Having thanked the president for inking the declaration, Texas' Republican Governor Greg Abbott noted that only 77 out of 254 counties have been made eligible for the aid.

While Biden pledged to visit the freezing state probably next week, his first big trip as US president was to the swing states of Michigan and Wisconsin. The latter was the state "that put Biden to the 270 electoral vote threshold in the Electoral College", according to CNN.

Politics Above All Else

"I'm pretty sure we will see Biden visit Texas, although you never know", says Dr Djene R. Bajalan, political analyst and professor of history at Missouri State University. "If he doesn't go there would be an outcry".

Joe Biden is unlikely to win any political scores in the traditionally red state of Texas, according to Earl Rasmussen, executive vice president of the Washington-based think tank Eurasia Centre. In contrast, Michigan and Wisconsin remain high on the new administration's agenda.

"The trips to Michigan and Wisconsin are primarily focused on gaining support for the $1.9 trillion COVID relief bill", the scholar explains. "Both states are battleground states that Biden narrowly won. Michigan will include a tour of Pfizer, which is producing one of the leading vaccines. The visit to neighboring Wisconsin seems to be geared toward addressing support for the relief bill as well as discussing vaccination plans".

The president's wide-ranging televised town hall event in Wisconsin specifically touched upon his coronavirus relief plan, which is still awaiting congressional action. "Now’s the time to go big", Biden said. "If we pass this bill alone, we’ll create 7 million jobs this year". GOP deficit hawks remain sceptical about additional spending, criticising the new administration for closing the Keystone XL pipeline, thus killing thousands of jobs. Furthermore, Republican lawmakers argue that the increase in the federal minimum wage to $15 an hour by 2025 would slash employment by 1.4 million.

"Texas, while suffering perhaps one of the worst natural disasters in over a century, is scheduled for a trip by the President in the future", Rasmussen notes. "The White House states that it is to not disrupt ongoing relief efforts in the state.  The delay is most likely not really a result of relief efforts as an appearance during the crisis would support and concern. It is likely a lower priority and to continue the focus on COVID relief efforts".

Apart from this, Biden knows that there is little chance that Texas will swing to support him and the Democrats, adds the scholar, who warns against underestimating the state's significance in future races.

​While Texas remains firmly in Republican hands, the US political class is very interested in turning it into a swing state, according to Djene R. Bajalan: "Texas is a big media market for both Democratic and Republican campaign advisers and consultants", he notes. "They want to work in the Texas market because it's a very lucrative market to campaign in".

However, the broader question is whether the Democrats will manage to tip the balance in its favour. So far, it appears unlikely, Rasmussen believes.

Texas Gov. Abbott blames solar and wind for the blackouts in his state and says "this shows how the Green New Deal would be a deadly deal for the United States of America" pic.twitter.com/YfVwa3YRZQ

​In addition to this, the Biden administration's immigration policies could lead to a ''humanitarian crisis'' in Texas, according to former acting Secretary of Homeland Security Chad Wolf.

In his Friday interview with Fox & Friends, Wolf lamented the fact that Democrats and DHS officials apparently "learned nothing from the [border] crisis that we saw in 2019". Earlier, Texas Attorney General Ken Paxton challenged the president's 100-day pause on deportations, arguing that the state would face financial harm if illegal immigrants were released from custody, according to the Texan Tribune.

As Senator, I will FIGHT to build the wall!https://t.co/hvjCu8sydn

​It was AG Paxton who filed a motion to the Supreme Court in December 2020 questioning the constitutionality of Biden’s victory in the key battleground states of Pennsylvania, Georgia, Michigan, and Wisconsin. However, the Supreme Court dismissed the state of Texas' motion, prompting a wave of criticism from pro-Trump conservatives.

"The relatively lower priority of Texas regarding response to the winter storm disaster in addition to recent Executive Orders targeting the fossil fuel industry will likely strengthen Republican support in the state and further weaken President Biden position in this critical state", Rasmussen highlights.