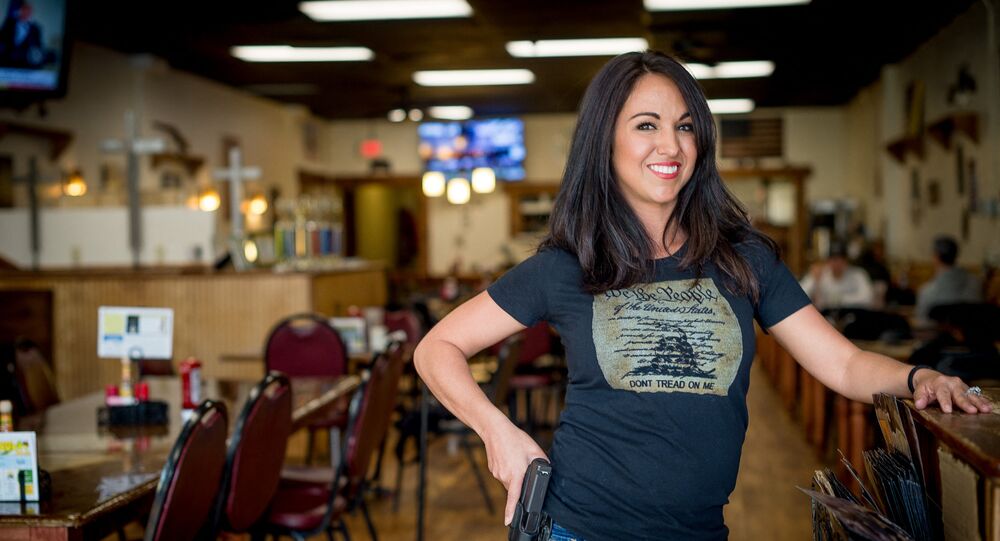 'These Are Ready for Use': GOP Rep. Boebert Defends Stash of Guns in Zoom's Meeting Background

Boebert, 34, drew public attention in November after the freshman lawmaker asked for permission to carry her Glock pistol at the Capitol, citing the right to bear arms granted to Americans in the Second Amendment. The congresswoman was eventually approved for a concealed carry permit.

Lauren Boebert, a new Republican Colorado representative replied to a wave of criticism over her weapons storage that was seen in the background of her Zoom during a virtual meeting of the House Natural Resources Committee.

During the coordinating meeting of the committee over Zoom, the Republican seemed to have several weapons on a bookshelf behind her, including rifles and a pistol.

“Who says this is storage? These are ready for use,” Boebert posted on Twitter Thursday.

Who says this is storage? These are ready for use. https://t.co/y9fxckjcGl

When one of the users jokingly noted that there were "not enough" weapons in the background, to which Boebert responded that some weapons "were lost in a terrible boating accident".

Unfortunately, the others were lost in a terrible boating accident...

Boebert has become a target for politicians, journalists, and social media users who have mocked her collection of guns.

I always thought my dirty dishes piled up and accumulating bacteria were the most dangerous thing in a Zoom background... 😳😳😳 #SafeStorage pic.twitter.com/uveXvGfafu

As the Robinhood hearing starts, the real action — apparently — is at the Natural Resources organizing meeting, where Rep. Jared Huffman (D-Calif.) is roasting Rep. Lauren Boebert (R-Colo.) for the gun shrine she’s constructed as a Zoom background. pic.twitter.com/I5GdIVsM1B

​Nonetheless, some social media users supported Boebert, noting that she should not be shy about storing her weapons on a bookshelf.

I found @laurenboebert backdrop display tacky/insincere. Gun ownership is an unwavering constitutional right and simply throwing them on a shelf is lazy. HOWEVER, I fully support her doing her zoom calls from a room full of properly stowed firearms pic.twitter.com/eCxmXVZvzl

Boebert has faced backlash regarding her position on firearms after she released an ad last month stating she will be carrying her personal weapon in Congress. In late December, advocates of gun restrictions called on House Speaker Nancy Pelosi and House Minority Leader Kevin McCarthy to block lawmakers from carrying guns on Capitol Hill. Similar calls emerged again following the Capitol breach on January 6.

"Government does NOT get to tell me or my constituents how we are allowed to keep our families safe. I promise to always stand strong for our 2nd Amendment rights", Boebert tweeted.

The set of rules for the 117th Congress issued a couple of days later showed that the permit remained in place.

According to the 1967 Capitol Police Board regulations, lawmakers who possess Washington licenses are allowed to carry weapons "within the confines of [their] office" and "within Capitol grounds", if the firearms are "unloaded and securely wrapped".