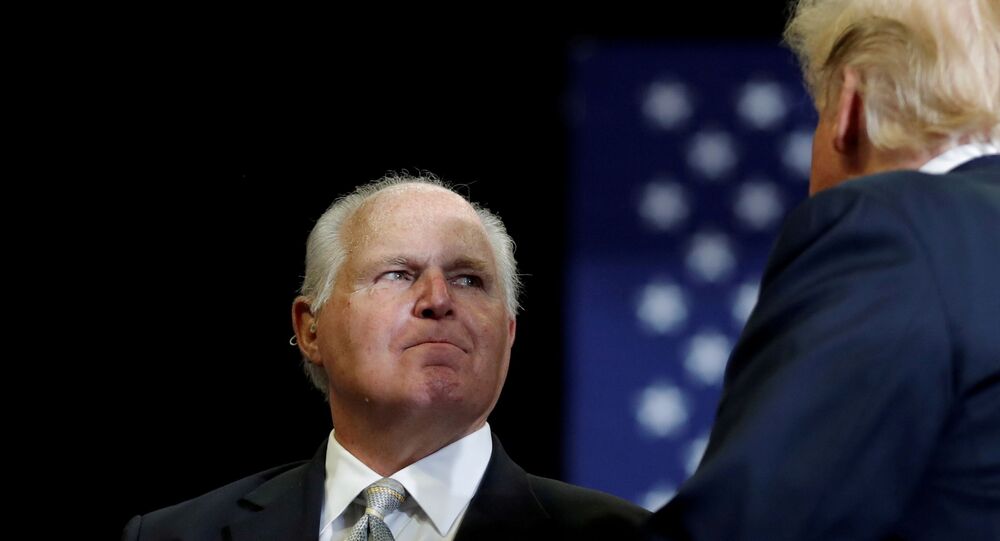 Rush Limbaugh, aged 70-years old, died at his Palm Beach, Florida, home Wednesday morning - a little bit over a year after he received the Presidential Medal of Freedom and announced his advanced lung cancer diagnosis.

Public statements and comments continue to emerge in the wake of Limbaugh's lung cancer battle and passing, including eulogies from past US presidents and key GOP figures.

"It was special and he was special," Trump said, recounting to Fox News the night he bestowed the highest civilian award of the US on Limbaugh.

The former US president revealed to the outlet via phone interview that he had spoken with the conservative radio host days before his passing. He also highlighted that Limbaugh spoke highly of his wife, Kathryn Adams, who announced the 70-year-old's passing on his nationally syndicated program "The Rush Limbaugh Show."

"Every time I spoke to him he would tell me how great she was. She took such great care," Trump gushed. "He was very brave. I mean, he - in theory - could have been gone four months ago."

Former US Vice President Mike Pence, who has referred to himself as “Rush Limbaugh on decaf," also phoned into Fox News Wednesday, proclaiming "the country will never forget Rush Limbaugh."

"When I served in the House of Representatives, he was our greatest champion when we were fighting a rearguard action for conservative values in Republican and Democrat administrations," Pence said of Limbaugh. "When I was governor of Indiana and when I served as vice president, he was the anchor of conservatism."

Today America lost a Giant with the passing of Rush Limbaugh, and Karen and I send our most heartfelt sympathies to Kathryn, his brother David, and the millions of Americans who loved and cherished his incomparable voice. pic.twitter.com/tGlhCiY7g6

​Pence, who hosted "The Mike Pence Show," an Indiana syndicated radio show that ran from 1994 to 1999, tweeted that Limbaugh was his "daily inspiration and the gold standard on the airwaves as he sat behind the golden EIB microphone."

"During my years among House Conservatives in Congress, he was our greatest champion," Pence added.

"In many ways, the Republican majority owes much of its continued success to the talk radio that Rush Limbaugh reinvented in the mid-1980s as a format for conversation among millions of Americans on a daily basis," Pence remarked on the US House of Representatives floor.

"I am in Congress today because of Rush Limbaugh."

"But it is a literal truth, Mr. Speaker, to say that I am in Congress today because of Rush Limbaugh," he argued.

Bush: Limbaugh Was 'a Voice of Millions of Americans'

Former US President George W. Bush wrote that he and his wife, Laura Bush, were "sorry to learn that Rush Limbaugh has passed away."

"A son of Cape Girardeau, Missouri, Rush rose as a pioneer of talk radio starting in the 1980s, and was a friend throughout my Presidency," Bush expressed in his Wednesday statement. "While he was brash, at times controversial, and always opinionated, he spoke his mind as a voice for millions of Americans and approached each day with gusto."

Bush notably called in to "The Rush Limbaugh Show" in 2008 to celebrate the 20th anniversary of the program.

"President George W. Bush calling to congratulate you on 20 years of important and excellent broadcasting," he said, leaving Limbaugh seemingly speechless. "I'm here with a room full of admirers, there's two others ... people who consider you friends."

One last Rush clip, here's from when George Bush called in to congratulate Rush Limbaugh on his show for some anniversary.

Rush seems speechless, maybe the only time I've ever seen him speechless. pic.twitter.com/IiOexcDl4I

"As he battled hearing loss and cancer late in life, he was sustained by the support of friends and family, his love of sports and rock and roll, and his belief in God and country. Rush Limbaugh was an indomitable spirit with a big heart and he will be missed." Bush's statement concluded.

"He changed talk radio, but more importantly, Rush changed the conversation to speak up for the forgotten, and challenge the establishment," Hawley said Wednesday. "He lived the First Amendment and told hard truths that made the elite uncomfortable, but made sure working men and women had a seat at the table."

My prayers are to the family of Rush Limbaugh today. Rush was a giant and pioneer in talk radio. He will be greatly missed.

US President Joe Biden, a Democrat, also offered his condolences from the other side of the political aisle.

“His condolences go out to the family and friends of Rush Limbaugh," White House Press Secretary Jen Psaki told reporters Wednesday. She also noted that it was unclear if the White House will release a separate statement on the conservative radio host's passing.