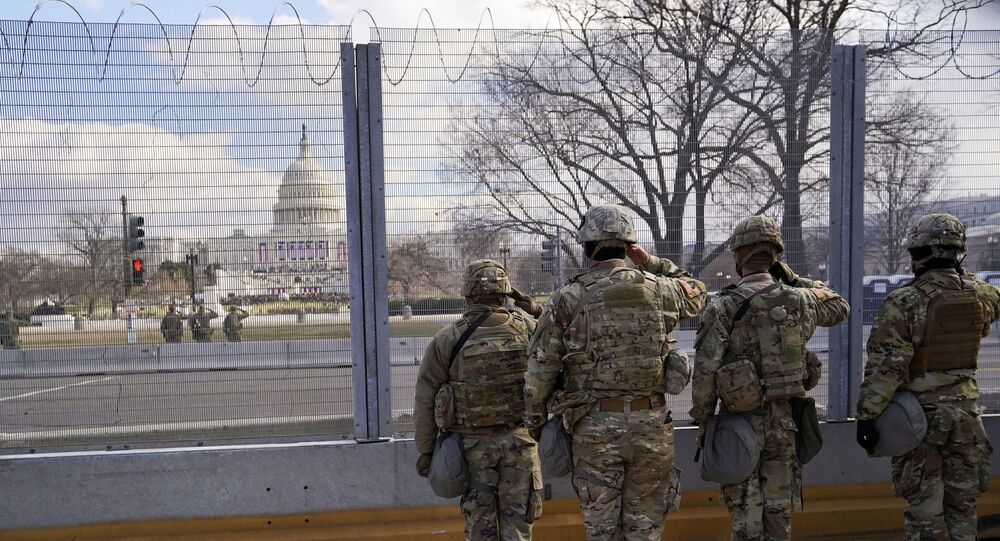 On 15 February, House Speaker Nancy Pelosi announced plans to form a "9/11-type commission" to probe the Capitol protests. The Dems real aim is to give more powers to US spy agencies, expand homeland security, and anti-terrorism measures and use them against the American right-wingers, US observers say.

A new independent 9/11-type Commission will be assigned to "investigate and report on the facts and causes relating to the January 6, 2021 domestic terrorist attack upon the United States Capitol Complex," Pelosi wrote to her party fellows on Monday. According to CNN, the commission of this nature is typically established by a statute, passed by both chambers of the Congress and signed into law by the president.

The original 9/11 Commission was established on 27 November 2002 by President George W. Bush and the United States Congress with the aim "to prepare a full and complete account of the circumstances surrounding the September 11 attacks." The bipartisan body consisted of five Democrats and five Republicans and was chaired by former New Jersey Republican Governor Tom Kean.

“our next step will be to establish an outside, independent 9/11-type Commission to investigate and report on the facts and causes relating to the Jan 6, 2021 domestic terrorist attack upon the US Capitol Complex”

​"The 9/11 Commission was supposed to be a bipartisan effort to find out what went wrong on 9/11," says American author and political analyst William Stroock. "Today the Dems will use this ‘9/11’ style commission to stoke fears of Q, white nationalism, Trump and his supporters in general. This commission will not be independent at all and will not be interested in ascertaining facts, only in assigning blame to Republicans, conservatives and Trump supporters."

Corporate media desperately needs some kind of drawn-out "9/11-type commission" with Trump as the main character -- their entire business model is in severe jeopardy with him out of the picture https://t.co/cZDhLQscAm

​Nearly 20 years on, it’s clear that 9/11 has proven disastrous for the US in many ways, according to Strook. However, first and foremost it led to the creation of a "vast domestic spying apparatus with secret courts and gave the Feds vast new spying powers," says the political analyst. Stroock suggests the Democrats "will want to give even more power to the domestic spying apparatus and turn it upon the right."

Meanwhile, the Biden administration plans to expand grants from the Department of Homeland Security (DHS) for studying and preventing "domestic violent extremism", according to NBC News' Friday report. Earlier, on 27 January, the DHS released its first-ever national terrorism bulletin warning about the looming threat of violent domestic extremism supposedly encouraged by the Capitol Hill protests.

That request was denied by Speaker Pelosi and her Sergeant at Arms.

During the attack, Capitol Police made the request again.

It took over an hour to get approval from Pelosi’s team! https://t.co/ctOWZ4PExw

​In the wake of the DC incident, the Democratic Party also pushed ahead with the Domestic Terrorism Prevention Act (DTPA). Andrew McCarthy, former assistant United States attorney for the Southern District of New York, suggested in his January op-ed for National Review that the bill "is not about countering terrorism" but "weaving a political narrative."

The legislation fell short of targeting jihadists, Antifa or Black Lives Matter militants, while focusing on white supremacists, "or, more specifically, Trump-inspired insurrectionists in the wake of the January 6 Capitol riot," according to the lawyer.

It's not the only controversy haunting the Democrats, according to American independent journalist Max Parry: the Dems have previously supported the BLM's "defund the police" movement and now they are advocating the expansion of homeland security and anti-terrorism measures.

"These are an inherent and irreconcilable contradictions," Parry says. "Meanwhile, curiously absent is any mobilisation to demilitarise the police, which under the 1033 Program with the Pentagon has hyper militarised US domestic law enforcement even in small towns in the past few decades, yet numerous studies shows has not resulted in lower crime rates… So the irony of calling to 'defund' the police while trying to ram through legislation that would likely increase their counter-terrorism training and militarisation is incompatible."

The movement to "defund the police" was well intentioned but potentially misguided where the legitimate concerns of citizens about the need to reform law enforcement could be used for other agendas, the journalist warns.

© REUTERS / ALEXANDER DRAGO
U.S. Speaker of the House Nancy Pelosi (D-CA) speaks during a news conference with House impeachment managers on the fifth day of the impeachment trial of former U.S. President Donald Trump, on charges of inciting the deadly attack on the U.S. Capitol, in Washington, U.S., February 13, 2021.

How GOP May Give Dems a Taste of Their Own Medicine

While cracking down on Trump supporters in the aftermath of the DC protests, the Dems have failed to convict former President Donald Trump over the alleged incitement of insurrection. As a result, Trump was once again acquitted in the Senate.

Now that the impeachment sham is over, will Democrats continue their strategy of blaming President Trump for everything or will they get focused on the real issues impacting Americans?

​"It seems they really thought they would convince 17 Republicans to crossover and vote to convict", notes Stroock. "Only seven Republicans did so and they’re now in deep trouble with their voters back home. Several have already been censured by their state parties. The Democrats had a plan, a bad one, and had no idea what to do when the plan was foiled by reality."

Now that the Dems created a new legislative tool, the "snap impeachment," the GOP could hypothetically fight back and give their political opponents a taste of their own medicine, the political analyst presumes.

"Given the way political gravity works, the Republicans will almost certainly win control of the House and Senate in 2022," he says. "The Republican base will call for the GOP to impeach Joe Biden. Given the Dem’s own precedent, why not?"

Kamala Harris may also find herself in a heap of trouble given that she earlier tweeted support for a fund that bailed out rioters, according to Strook. Following Trump's acquittal Republican Senator Lindsey Graham warned that Harris could be impeached because she "actually bailed out [BLM] rioters," pointing to her support of a Minnesota-based bail fund.

"It's quite a bit of a stretch to say that Harris could be impeached for asking to contribute to a fund that went towards bailing out activists, especially since there is no evidence she herself bailed anyone out," Parry suggests. "However, that Graham made such threats does show how the prospect of impeachment is now being thrown around so loosely as a political football since the bar has been set so low by the Democrats who impeached Trump over a dubious phone conversation."

While a lot may happen before the 2022 midterms, the GOP should jump at the opportunity to instrumentalise the potential 9/11-style Commission, argues Strook.

"The Republicans will (or should) approach this commission with great skepticism, turn the camera around and highlight the violence and racism of the left. This commission is a tremendous opportunity for the GOP," the political analyst believes.