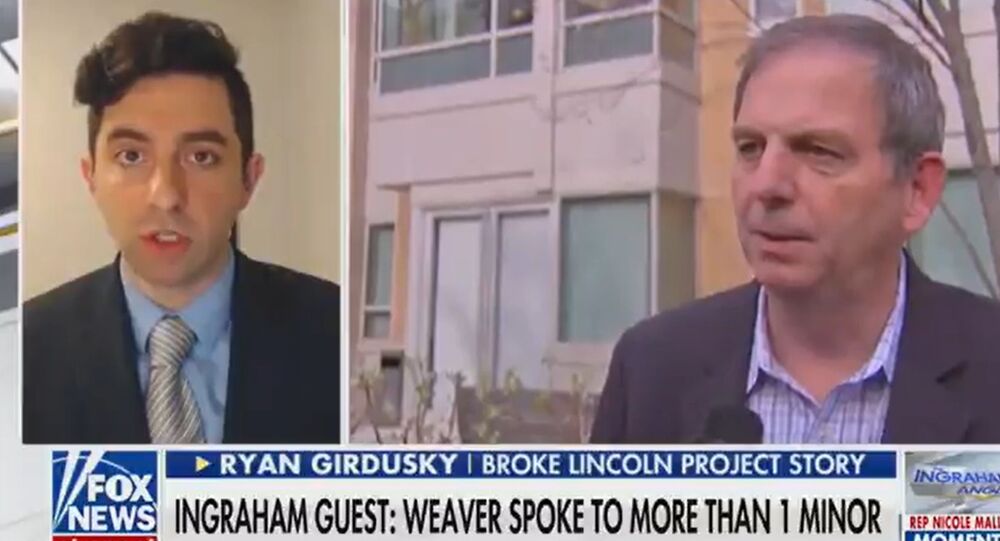 One of the founders of legendary anti-Trump campaign effort Lincoln Project – John Weaver – has found himself in hot water since January, after dozens of men accused him of sexually harassing them in the past with lewd messages. The 61-year-old admitted last month that his behaviour was “inappropriate.”

Another underage boy has opened up about his experience of being sexually harassed by Lincoln Project’s co-founder John Weaver, journalist Ryan Girdusky told Fox News’ Laura Ingraham on Monday.

Girdusky, one of the reporters who broke the story on the Lincoln Project sex scandal, says that apart from New York Times interviewee Cole Trickle Miele, who accused Weaver of sending him sexually charged messages when he was just 14, another young person has allegedly been assaulted by the politician.

“The New York Times report on January 31 that John Weaver was in communication with a 14-year-old was the first allegation made that he was sexually harassing a minor,” Girdusky said during the programme.

“I’m here to say I have made contact with another minor who was sexually harassed by John Weaver. He is still a minor today,” the reporter added.

According to Girdusky, who says that he started collecting emails from Weaver’s alleged victims from late May, “the allegations involving minors [against Weaver] are now multiple and there’s possibly more to come.”

NEW: @RyanGirdusky, who first broke the story about John Weaver's predatory behaviour, says on @IngrahamAngle that he has spoken to another minor who was "aggressively sexually harassed" by the Lincoln Project founder

The journalist did not reveal the name of the young person in question, or did he give any further details, but argued that he had seen the conversation between the two. He said the correspondence portrayed the anti-Trump campaign top staffer as “aggressively sexually harassing” the minor.

Girdusky says Weaver would start talking with “kids and young men” on Twitter and make them alluring job offers “in exchange for sexual favours.”

According to Cole Trickle Miele, now 19, that was exactly what happened to him back in 2015, when he started following Weaver on Twitter. He then received a direct message from him.

“I remember being a 14-year-old kid interested in politics and being semi-starstruck by John Weaver engaging in a conversation with me,” the man recalled in the bombshell New York Times report.

He continued receiving messages from the politician, who was working for Ohio Governor John Kasich back then. Trickle Miele now says that the exchanges eventually made him “uncomfortable.”

In March 2020, when the young man has already turned 18, he allegedly got a creepy text from Weaver: “I want to come to Vegas and take you to dinner and drinks and spoil you!!” and a follow-up message referring to his physique with a sexual implication.

Apart from Trickle Miele, 20 other men, including Lincoln Project employees, said that they have been targeted by unsolicited messages from Weaver in the past.

The Never Trumper responded to accusations back in January, admitting that his conversations with some males were “inappropriate” and had publicly apologised for the pain and “discomfort” he had caused others while “living a deeply closeted life.”

Weaver has been married since 2007 and has two kids.

“The truth is that I'm gay and that I have a wife and two kids who I love. My inability to reconcile those two truths has led to this agonising place,” he told Axios last month.

Lincoln Project key staffers have slammed their once co-founder, calling him “a predator, a liar, and an abuser” in a statement, while maintaining that they were “shocked” by the surfaced allegations.

Insiders and some journalists, including Girdusky, have scrutinised the “shock” claims, saying that many of the alleged victims raised their concerns with the group’s management as early as June 2020 but were ignored.

Following the massive backlash the movement has suffered, as well as financial mismanagement claims, Lincoln Project’s co-founders Jennifer Horn and Steve Schmidt, a veteran Republican strategist, have resigned from the board.

The group announced on Monday that their employees will be released from the “confidentiality provisions in their employment agreements” as the review into their workplace environment was ongoing.

The fundraising page has been inactive as of Saturday.