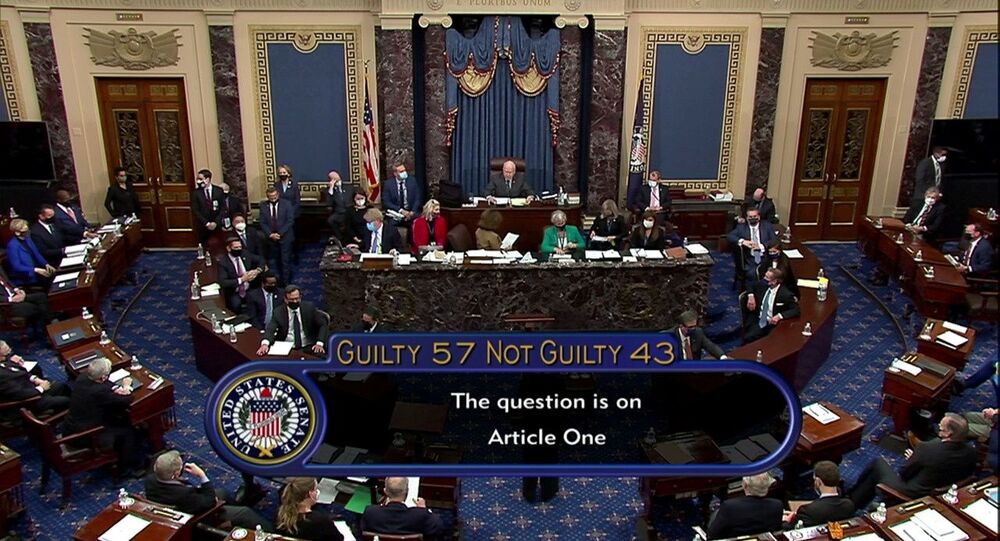 The Senate acquitted former President Donald Trump on the charge of incitement to insurrection on Saturday, with the 57-43 vote falling short of the two-thirds majority required to convict and forever bar him from holding public office.

Patricia Bast Lyman, Republican National Committee committeewoman from the state of Virginia, has apologised to the US Jewish community after comparing Donald Trump’s Senate impeachment trial to Nazi show trials in a Facebook message

“I was saddened and disappointed to learn a comment I made on the current impeachment against President Trump in the US Senate on a post referencing Nazi war trials was interpreted as anti-Semitic and insensitive. I immediately contacted leaders in the Jewish community and I see now how the comment could be misinterpreted. I have therefore deleted it,” the official wrote on her Facebook page.

“I have always stood unequivocally with Israel and the Jewish people…I am horrified that my comment would be seen as diminishing the memory of those millions who perished solely because they were Jewish. That is not in my heart, has never been and never will be. I am truly sorry that anyone for a moment believed there was any ill-intent on my part,” she added.

The apology follows Bast Lyman’s response to a Facebook post by Fairfax County Republican Committee Chairman Steve Knotts, who posted a photo from a trial in wartime Nazi Germany as Trump’s Senate impeachment trial unfolded. “At least some of those tried by the Nazis may have been actual criminals, unlike the current debacle,” she wrote.

The post and Bast Lyman’s comments, both of which have now been deleted, prompted some observers to accuse her of using “virulent anti-Semitic and pro-Nazi language” and to demand her resignation. Others suggested that the Anti-Defamation League, a pro-Israel US-based NGO tasked with stopping “the defamation of the Jewish people,” to get involved.

I’m thinking the @ADL might have something to say about this as well. The anti-Semites are all crawling out of their holes now. It’s time to do something about it. @VA_GOP Patricia Bast Lyman must resign now. #NeverAgain https://t.co/nXrOGsKYA2

The committeewoman’s supporters thanked her for the apology, calling her a “great friend and a fellow patriot” and suggesting the attacks against her were part of a “deliberate effort to mischaracterise” her.

Soon after coming to power in 1933, Nazi authorities began to stage show trials against forces deemed hostile to the regime. The trials, known as "People’s Courts," were established after the trial of the alleged perpetrators of the Reichstag Fire, which saw the acquittal of the majority of the accused. Unlike the courts that preceded them, People’s Court trials lacked a presumption of innocence, and defendants were restricted from consulting legal counsel.

Nearly 11,000 people were convicted by People’s Courts, with another 5,200 sentenced to death for high treason. Notable targets of the trials included German communists, socialists and social democrats, persons engaged in civil disobedience, journalists, pacifist religious leaders, Jews, resistance leaders, and other enemies of the Nazi regime. The most famous trial followed the 20 July 1944 plot to assassinate Adolf Hitler.

Bast Lyman’s inapt comparison of Trump’s Senate trial to other maligned processes from history is not the first of its kind. Last week, Louisiana Republican Senator Bill Cassidy accused House Democrats of carrying out a Soviet-style “show trial” against the former president.

Donald Trump was acquitted by the Senate on Saturday, with Democrats and Never-Trump Republicans failing to reach the two-thirds majority required to convict him of inciting the 6 January storming of the Capitol.