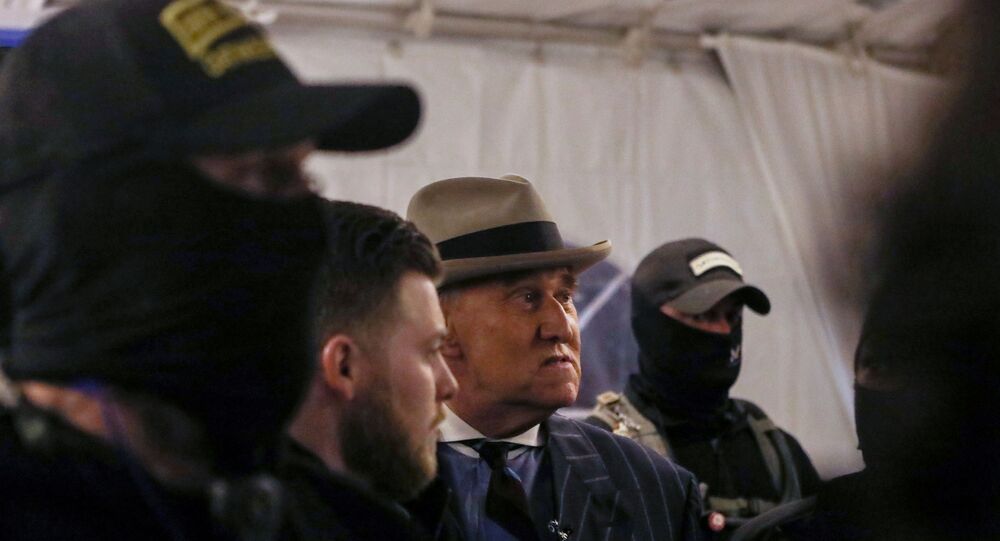 Three people reportedly affiliated with the conservative militia organisation Oath Keepers have been arrested for participating in the 6 January Capitol storming. In total, more than two hundred people have been detained for their involvement in the riot.

The videos cited by the NYT suggest that the group was escorting Stone on 5 and 6 January while he was attending meetings. The newspaper claims that all of them later entered the Capitol building, meeting other alleged Oath Keepers members who have already been charged.

© AFP 2021 / ROBERTO SCHMIDT
In this file photo taken on January 06, 2021 Trump supporters clash with police and security forces as they push barricades to storm the US Capitol in Washington D.C. - Impeachment prosecutors aired terrifying, never-before-seen footage of senior US politicians fleeing for their lives during the January assault on Congress by Donald Trump supporters on day two of the former president's Senate trial. With painstaking, graphic presentations, Democratic impeachment managers walked senators through hours of video, some of which came from security cameras and police bodycams and was being aired for the first time.

Last month three individuals were indicted by a federal court in the District of Columbia “for conspiring to obstruct Congress”, obstructing an official proceeding, destruction of government property, and unlawful entry into a restricted building. All of them were reportedly associated with the Oath Keepers.

Throughout the country, over 200 people from 40 states have been arrested and charged for crimes related to weapons or violence, according to USA TODAY’s data tracking.

On 6 January, a Washington rally in support of then-US president Donald Trump turned into a violent protest as a mob broke into the Capitol building, disrupting the certification of Electoral College votes being held there that day. Ultimately five people died during the riot, including one police officer.

As a result of the 6 January riot, the now-former president was accused of inciting an insurrection and impeached by the US House of Representatives on 13 January. He was later acquitted by the US Senate, which voted 57-43 on 13 February in favour of the measure, short of the 2/3 majority needed to convict Trump.