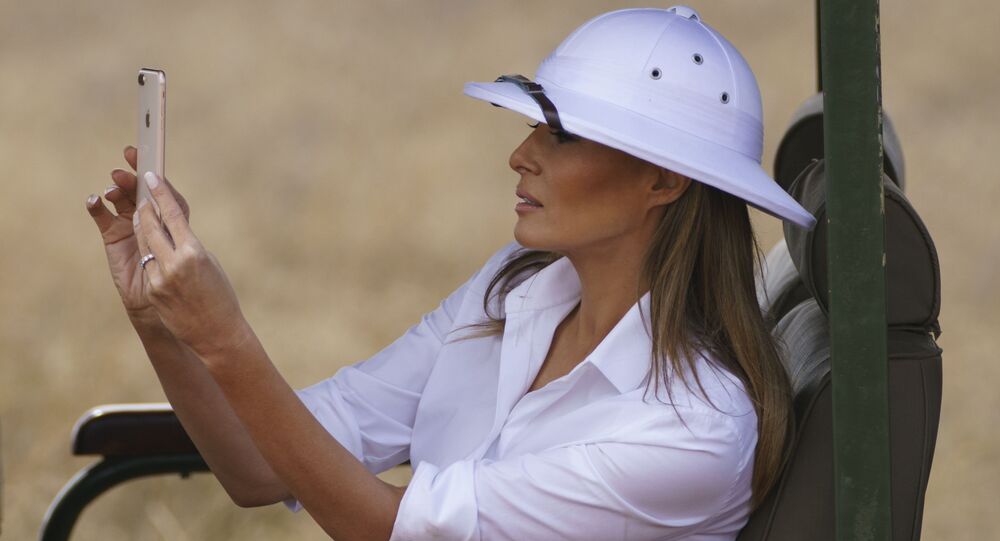 The ex-first lady's former confidante and author of the memoir "Melania and Me", Stephanie Winston Wolkoff suggested no one ever expected Melania to accomplish anything "impactful", having early on pointed in her book to a definitive "loathing" between the ex-president's wife and her stepdaughter Ivanka.

Melania Trump's former friend has claimed the ex-first lady was left with too limited a budget, one far too insufficient to hire staff for her office in the East Wing of the White House. Speaking on the podcast Mooch FM, Stephanie Winston Wolkoff, who earlier penned the tell-all book "Melania and Me", said no one expected Melania to be able to do something meaningful, which turned out to be a really "disheartening" experience for her personally.

"I walked into the White House on 22 January and had dinner with the Trump family the day after the swearing-in", Stephanie, who worked as an unpaid adviser to Melania from January 2017 until February 2018, recalled.

She said she was "so looking forward after we had toured the East Wing, so Melania and I [wanted] to create this bipartisan group of women that were going to really make a difference to the world", saying she believed it was possible, and "it was", the ex-aide pointed out.

Wolkoff went on to note that after speaking to Donald Trump's deputy chief of staff, Katie Walsh, she started to realise "Melania didn't have a budget and didn't really have any staff".

"It was me interviewing everyone because Ivanka and Jared had used all of the budgets, all of the titles", she lamented, suggesting that Melania was left with "a handful of titles and salaries that wouldn't enable us to hire anyone with any experience".

She said she had to sacrifice her original salary as she needed to hire more people "in order to be there and to help set up the East Wing".

Inaugural Woes and 'Demonstration of Vindictiveness'

In the aforementione book, which came out in September, Wolkoff pondered at length about her time at the White House, making quite a few explosive claims about the 2017 inaugural funds along the way.

Referring to what media outlets described as stories about "insane overspending" during Trump's inauguration, Wolkoff recalled in her memoir how Melania essentially "threw her to the wolves" by allowing her, the person who helped produce the event, to "take the blame in the press".

"I begged her to just come out and say that I was her friend, I was loyal. Nope, nothing. So the betrayal, the pain of that was like – I gave up my whole life for this woman. No one else would help Melania. I mean, she was alone", Wolkoff complained, adding that Melania is "just like her husband".

Wolkoff left the White House in February 2018 after it emerged that Donald Trump's inaugural committee had paid $26 million to a firm she founded to arrange events for his inauguration. Wolkoff has since insisted that she wasn't fired, but simply "thrown under the bus".

In her book, the one-time East Wing adviser and Melania confidante, suggested the ex-FLOTUS and her stepdaughter Ivanka Trump were at loggerheads over their potential leverage in the White House.

As part of a lawsuit over the alleged misuse of more than $1 million in Trump's inaugural funds, in late 2020, just weeks before Trump’s transfer of power to Joe Biden, attorneys subpoenaed records from Ivanka Trump, First Lady Melania Trump, Thomas Barrack Jr., a close friend of the president who chaired the inaugural committee, and a number of others.

© AP Photo / Mary Altaffer
Presumption of Guilt? Clinton Claims Only Way to Acquit Trump is Via Aid From Accomplices in Jury

At the time, Ivanka Trump sat for a five-hour deposition as part of the lawsuit, speaking as a witness in the proceedings, which she called another "politically motivated demonstration of vindictiveness & waste of taxpayer dollars". She also tweeted a December 2016 email whereby she called on the management of the Trump hotel, where the inauguration was due to take place, to draw an invoice at "a fair market rate".

After the publication of the memoir in September, the US Justice Department sued Wolkoff, claiming that she had violated a nondisclosure agreement by publishing a tell-all memoir about her time at the White House.

US First Lady Melania Trump, for her part, lashed out at the woman, berating her former aide as a person of "dishonest behaviour" who "only cares" about her "personal agenda".