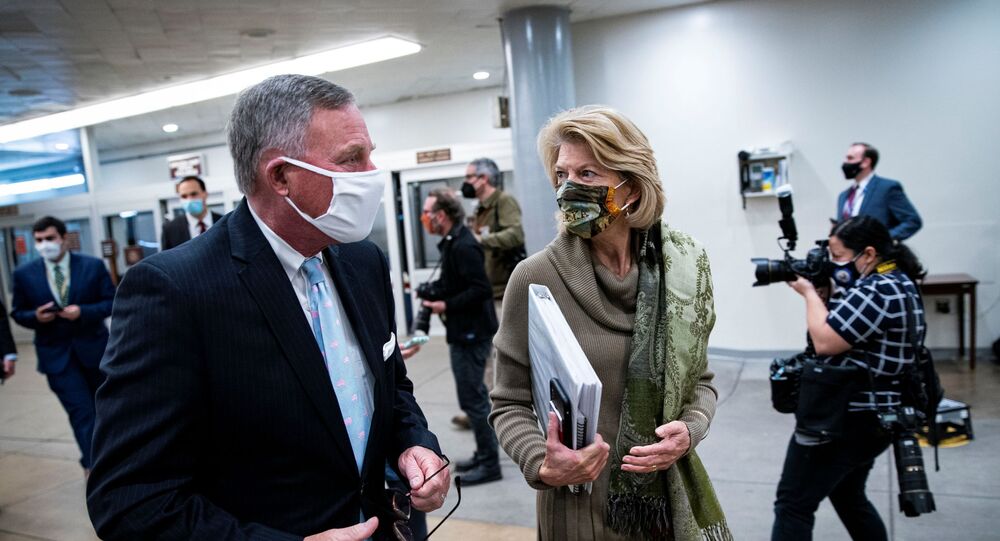 Make it Seven: GOP Senators Who Voted to Convict Trump Offer Reasons For Their Decision

Saturday marked the final day of Donald Trump's second impeachment trial in the Senate, with the upper body of the US government acquitting Trump on his charge of "incitement of insurrection", as the final tally showed 57 votes in favour of the impeachment article and 43 against.

Falling in line with what many observers predicted, the Senate failed to gain the two-thirds majority needed to convict the former US president, with 7 Republican senators voting in favour of the Trump impeachment article.

A surprise vote came from Richard Burr, who earlier voted twice in support of the idea that the impeachment was unconstitutional. In his statement after the vote, Burr explained that he still believes so, but submits to the Senate's decision to proclaim the trial allowable under constitution.

"The evidence is compelling that President Trump is guilty of inciting an insurrection against a coequal branch of government and that the charge rises to the level of high Crimes and Misdemeanors," Burr stated. "Therefore, I have voted to convict."

Bill Cassidy said after the vote that "our Constitution and our country is more important than any one person", explaining his "yes" vote. Earlier, he voted to support the constitutionality of the trial.

"I voted to convict President Trump because he is guilty", Cassidy asserted.

Our Constitution and our country is more important than any one person. I voted to convict President Trump because he is guilty. pic.twitter.com/ute0xPc4BH

​Sasse, justifying his choice to convict Trump, said that he pledged to "speak out when a president – even of my own party – exceeds his or her powers".

“I cannot go back on my word, and Congress cannot lower our standards on such a grave matter, simply because it is politically convenient. I must vote to convict,” he stated after the vote.

Romney, a long time Trump critic who voted to convict, said that, considering all of the arguments, found the former president guilty of attempting to "corrupt the election" by pressuring Georgia State Secretary Brad Raffensperger to falsify election results and of inciting the Capitol Hill insurrection.

"President Trump also violated his oath of office by failing to protect the Capitol, the Vice President and the others in the Capitol", Romney went on. "Each and every one of these conclusions compels me to support conviction."

Renegade Republican Senators were joined by Senator Pat Toomey, who tweeted a tirade after the vote explaining that, despite that "the mainstream media was unrelentingly biased and hostile to the president" and "many Democrats" sought to impeach Trump "from the moment he won the 2016 election", he still believed that Trump's response to election results was not acceptable.

"He urged the mob to march on the Capitol for the explicit purpose of preventing Congress and the Vice President from formally certifying the results of the presidential election. All of this to hold on to power despite having legitimately lost", Toomey said. "[...]I was one of the 74 million Americans who voted for President Trump, in part because of the many accomplishments of his administration. Unfortunately, his behavior after the election betrayed the confidence millions of us placed in him."

His betrayal of the Constitution and his oath of office required conviction.

​GOP Senator Susan Collins, one of the seven voting to convict, reiterated her opinion that Trump incited the Capitol Hill insurrection.

​Lisa Murkowski, the only Republican who faces an election next year, told Politico that she voted without regard for the possible political fallout.

“If I can't say what I believe that our president should stand for, then why should I ask Alaskans to stand with me?” Murkowski questioned. “This was consequential on many levels, but I cannot allow the significance of my vote, to be devalued by whether or not I feel that this is helpful for my political ambitions.”

She has not yet released a statement on her vote to convict.

Salute From the Democrats

Among other Democrats praising Republicans choosing to convict Trump, House Speaker Nancy Pelosi took to Twitter to join the salutations toward the seven GOP Senators.

"I salute the Republican Senators who voted their conscience and for our Country," Pelosi tweeted, immediately moving to denounce other GOP lawmakers: "Other Senate Republicans’ refusal to hold Trump accountable will go down as one of the darkest days and most dishonorable acts in our nation’s history."

House Democrats, led by Pelosi, initiated Trump's second impeachment days after the deadly 6 January Capitol riot, accusing the ex-president of inciting it. The House impeachment article was then delivered to the Senate, with the trial kicking off on 9 February.

Senators voted that the impeachment trial was constitutional, although the Trump defense team insisted that it was not, arguing that he is now out of office. House Democrats pointed out that there is no "January exception" and a president must be held accountable for all actions conducted from their first day in office to their last.

Six Republican Senators Who Voted That Trump Impeachment Is Constitutional

‘A Lot on My Mind This Morning’: Senator Outs Herself Wearing Mismatched Shoes at Impeachment Trial