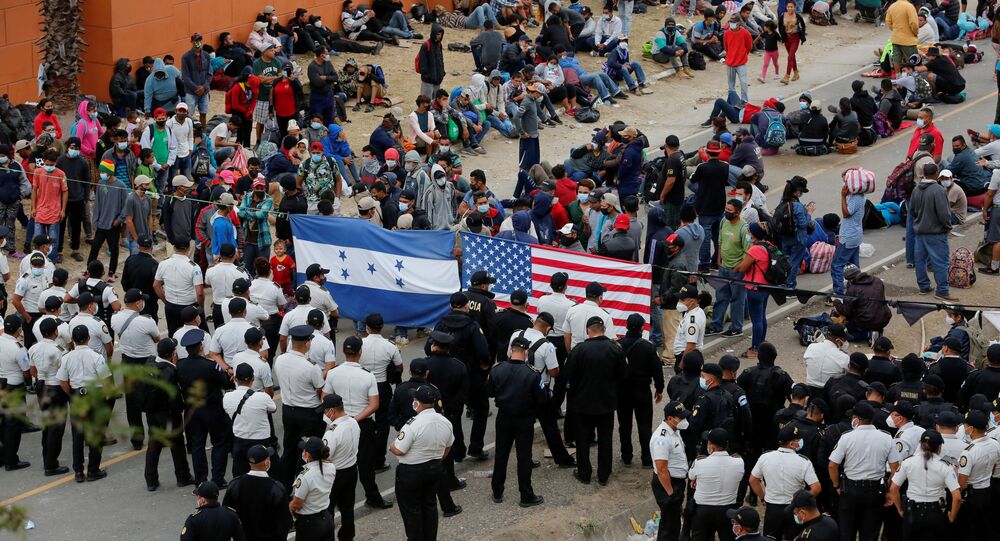 US immigration services have seen a rise in the number of new arrivals in recent weeks, while the latest migrant caravan of up to 9,000 people marching from Honduras is yet to reach the southern border.

Congressional Republicans have attacked President Joe Biden's plan to admit 25,000 asylum seekers amid the COVID-19 pandemic and a "surge" in immigration.

"As President Biden has made clear, the US government is committed to rebuilding a safe, orderly, and humane immigration system," Homeland Security Secretary Alejandro Mayorkas said in a statement. "This latest action is another step in our commitment to reform immigration policies that do not align with our nation’s values."

Republicans see that as a return to the so-called "catch and release" policy ended by former US President Donald Trump, under which those seeking refuge were detained before being set free to reside in the US. Under Trump's Migrant Protection Protocols, dubbed the "Remain in Mexico" programme, asylum-seekers had to stay south of the border until they were called for an immigration hearing.

Katko, a ranking member of the House Homeland Security Committee, warned of a resulting "surge" in immigration, putting "unimaginable" pressure on immigration officials.

"Those being re-processed south of our border by international organizations, who will determine their eligibility, will soon be released into US communities as they get added to the 1,000,000+ immigration court backlog. Adjudication will take years," Katko said. "As more migrants catch wind of the reimplementation of 'catch-and-release,' the surge on our border will be unimaginable."

The congressman seized on reports that Customs and Border Protection (CBP) had been forced to allow some migrants into the country as the rate of new arrivals increased and Mexico refused to direct those with children under 12 into already-overcrowded camps.

"As CBP encounters at the border top 3,000 a day on average, we have swiftly moved into the dangerous territory of the 2019 border crisis," Katko said. "The situation at the border, combined with the raging pandemic, has created a perfect storm of security, humanitarian, and public health concerns."

Cruz said on Friday that the US was facing a "humanitarian and security crisis at our southern border", and warned that the influx of migrants could bring in new cases of the deadly coronavirus strain.

"Effectively returning to catch and release — as the Biden administration announced today — could very well result in the release of COVID positive persons into the US, which will exacerbate the dual border and public health crises by making Texas border communities less safe and further straining local resources," the Canadian-born son of a Cuban immigrant said.

This week, the Biden administration reiterated earlier warnings to some 8,000 to 9,000 people marching in latest migrant caravan from the Central American nation of Honduras to turn back.

White House Press Secretary Jen Psaki said on Wednesday: "now is not the time to come", adding that "the vast majority of people will be turned away."

Friday's Homeland Security statement included a warning that it "should not be interpreted as an opening for people to migrate irregularly to the United States".

That coup was reportedly supported by the newly-elected administration of US President Barack Obama — to whom Biden was vice-president — and his secretary of state, Hillary Clinton.