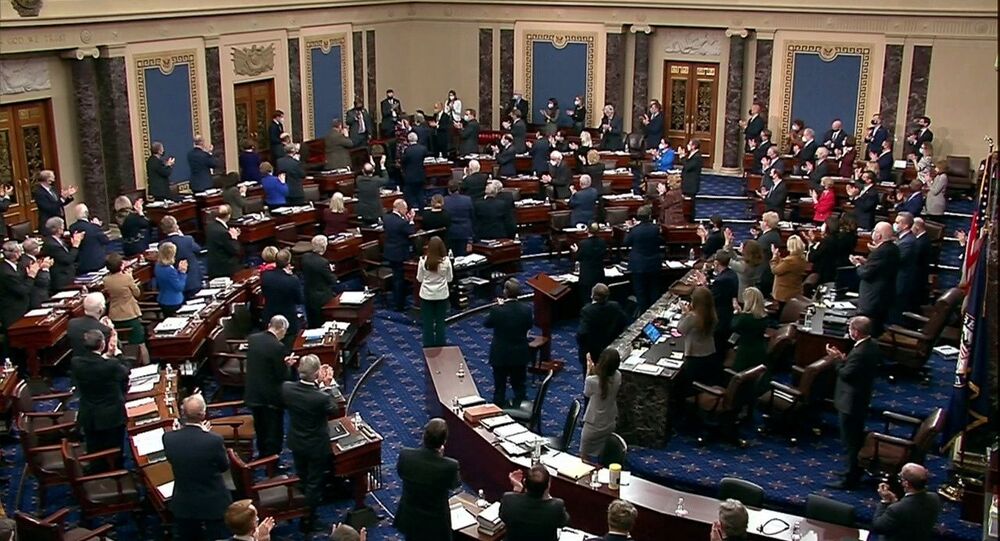 The trial is running ahead of the anticipated schedule as Trump's legal team, who already faced criticism over their unimpressive opening statements, wrapped up their defence presentation in a matter of hours on Friday despite having a total of 16 hours to prove the former president not guilty.

The Senate vote on Trump's impeachment trial is drawing near. Both the Democrats and Trump's defence team have presented their main arguments on the case and only a few things separate the Senators from possibly one of the most important votes this year - deciding whether Donald Trump incited insurrection in Washington on 6 January.

Here is what you can expect from Day 5 of the impeachment trial:

What Happens on Possibly the Last Day of Trial?

The fifth day of the proceedings start at 10am Eastern Time. Something that could possibly delay the final voting on Trump's conviction on this day would be either side deciding to call or subpoena witnesses and documents. There has, so far, been no indication that the sides intend to do so. The main "hero" of the trial, Donald Trump, announced a long time ago he would not be giving testimonies under oath.

Still, if one of the sides decides to do so, the senators will have two hours to debate and vote on the issue, plus any time needed to depose witnesses.

© REUTERS / US Senate TV
U.S. Senate Majority Leader Chuck Schumer (D-NY) introduces legislation to award a Congressional Gold Medal to U.S. Capitol Police Officer Eugene Goodman for his actions to defend the Senate and senators during the siege on the Capitol on January 6, during the fourth day of the impeachment trial of the former president on charges of inciting the deadly attack on the U.S. Capitol, on Capitol Hill in Washington, U.S., February 12, 2021.

Additionally, one of the Democrat senators, Sheldon Whitehouse, has called on colleagues to pause the trial in the light of alleged new evidence on the case. He referred to the CNN report based on accounts of anonymous lawmakers and claiming that Trump "refused" to call off the protesters in the telephone call with House Republican leader Kevin McCarthy on 6 January. It is unclear though whether fellow senators will accept Whitehouse's call.

After the issues of possible witnesses and a call to halt the trial are resolved, the Democrats and Trump's legal team will have up to two hours each to present their final arguments on the case. After that, the senators will have to vote on whether they acquit or convict Donald Trump.

Who Will Determine the Outcome?

The outcome of the impeachment trial vote is a bit of a wild card. The Democrats need 2/3 of the senate - 67 votes - to convict Trump of incitement to insurrection, although the party controls only 50 seats. This means the Democrats need to persuade 17 Republicans to join their side.

The Democrats can probably rely on six GOP senators to vote in favour of conviction: Nebraska's Ben Sasse, Louisiana's Bill Cassidy, Alaska's Lisa Murkowski, long-time Trump opponent Mitt Romney of Utah, Pennsylvania's Pat Toomey and Maine's Susan Collins are the Republican lawmakers, who voted to recognise the second trial against Trump as "constitutional". Most of them condemned his speech at the rally ahead of 6 January riot and some of them reportedly entertain presidential ambitions for 2024.

© REUTERS / US Senate TV
U.S. House impeachment manager Rep. Joaquin Castro (D-TX) answers a question submitted by a Senator during the fourth day of the impeachment trial of the former president on charges of inciting the deadly attack on the U.S. Capitol, on Capitol Hill in Washington, U.S., February 12, 2021

Reuters reported, citing an anonymous Republican senate aide, that as many as 10 Republicans are planning to vote in favour of Trump's conviction on 12 February. That leaves Democrats still seven votes short of securing their goal of convicting the former president.

However, Trump's conviction is only the first part of the Democrats' plans and not necessarily the most important one. If the former president is found guilty, then the Democrats will have the option of initiating another senate vote – this time to bar Trump from running for public office ever again, including in 2024 – something he had hinted before and after his departure from the White House in January.

Unlike the conviction vote, the constitution does not require a supermajority for this decision. This means that with 50 Senate seats controlled and Vice-President Kamala Harris having the tie-breaking vote, the Democrats can effectively remove Trump from the political playfield in the years to come.