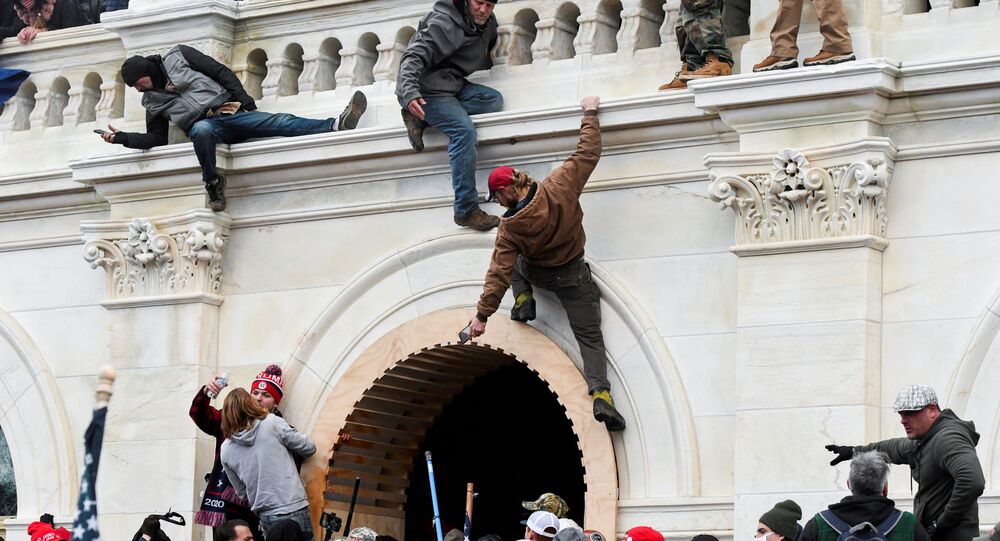 The 45th US president is accused of "incitement of insurrection" by encouraging the deadly 6 January Capitol riot, but he denies responsibility for the violent acts committed during the attack that saw five people killed, insisting that he never wanted violence on US streets.

The former US president, Donald Trump, spoke with House Republican leader Kevin McCarthy by phone on January 6, the day the US Capitol building was attacked by rioters. Trump refused to call his supporters off, even when "begged" by McCarthy, CNN reported on Friday, citing lawmakers briefed on the conversation.

"Well, Kevin, I guess these people are more upset about the election than you are," Trump reportedly told McCarthy in a conversation that was described by CNN sources as "a shouting match".

According to the report, McCarthy became furious, telling Trump that rioters were breaking into his office through the windows, and lashed out at him: "Who the f**k do you think you are talking to?".

Lawmakers familiar with the conversation insisted that the former president had no intention of asking his supporters to leave, even though congressmembers were begging him to do so.

Trump's conversation with McCarthy, as the latter was trapped inside the ransacked Capitol, reportedly turned into "heated disagreement about who comprised the crowd".

Some lawmakers said that Trump's reported reluctance to call off his supporters off was "a dereliction of his presidential duty."

"He is not a blameless observer, he was rooting for them," a GOP congressperson told CNN. "On January 13, Kevin McCarthy said on the floor of the House that the president bears responsibility and he does."

CNN reported that it was Representative Jaime Herrera Beutler of Washington who first brought up the Trump-McCarthy squabble.

"You have to look at what he did during the insurrection to confirm where his mind was at," Herrera Beutler told CNN. "That line right there demonstrates to me that either he didn't care, which is impeachable, because you cannot allow an attack on your soil, or he wanted it to happen and was OK with it, which makes me so angry."

Ohio Republican Representative Anthony Gonzalez told CNN that he believed that Trump's refusal to call off the rioters "speaks" to his "mindset".

"He was not sorry to see his unyieldingly loyal vice president or the Congress under attack by the mob he inspired", the report quoted Gonzalez as saying. "In fact, it seems he was happy about it or at the least enjoyed the scenes that were horrifying to most Americans across the country."

New details have emerged just as Trump's second impeachment trial is about to reach its climax on its way to day five. Now that both sides have presented their arguments for and against the charges of inciting insurrection, senators will vote on whether to convict or acquit the former president.

© REUTERS / KEVIN LAMARQUE
Trump Impeachment Defense Rolls Out Video Showing Madonna, Johnny Depp, Dems 'Advocating Violence'
On Friday, the defense team argued that Trump's choice of words - particularly, the word "fight" - was not inciting insurrection, and rolled out footage that they characterized as proving that Democratic politicians and celebrities were "advocating violence". The Trump lawyers also repeated their argument that impeaching a private citizen is unconstitutional.

Regarding the way tha Trump addressed the mob of his supporters, his lawyers argued that he tried to calm them, referring to a series of tweeted statements he made some 90 minutes after the Capitol had been breached and people killed, urging them to "go home" and "remain peaceful".

House impeachment managers said earlier that the former president's speech at his Stop the Steal rally from the White House lawn just prior to the 6 January Capitol attack, that left 5 people dead, was a "betrayal" of his office and his oath to the Constitution. They also wondered how many lives would have been saved had Trump called to stop the attack with "even half as much force as he said 'stop the steal.'"