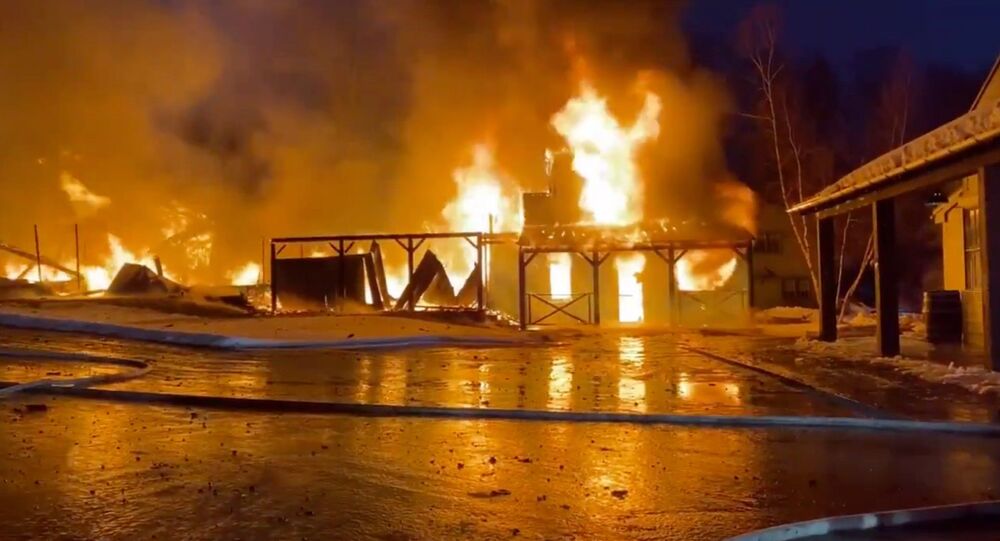 Video: Massive Fire Erupts at ‘Hole in the Wall Gang Camp’ in Connecticut Founded by Late US Actor

The Hole in the Wall Gang Camp was established in 1988 by the late American actor Paul Newman with the intention that the grounds would provide “a different kind of healing” to seriously ill children and their loved ones.

Emergency personnel from nearby towns responded to reports of a massive fire at the Hole in the Wall Gang Camp in Ashford, Connecticut, on Friday, after details surfaced that multiple buildings at the facility were engulfed in flames.

Footage captured from the scene shows much of the facilities ablaze, with heavy smoke billowing as officials attempt to control the incident.

Local news outlet WTNH reported that firefighters have been able to contain the fire to a “controlled measure,” but that it’s still unclear what caused the blaze to break out.

No injuries or fatalities have been reported.

​Firefighters reportedly responded to the scene at about 5 p.m. local time, with emergency responders from “multiple area towns” helping to put out the blaze, according to the Hartford Courant.

​James Canton, CEO of the camp, explained in a statement to WTNH that the Arts & Crafts, Woodshop, Cooking Zone and Camp Store buildings were destroyed in the fire.

“We deeply appreciate the quick response of the local fire departments and Connecticut State Police Troop C,” reads the statement. “Although the cause of the fire is unknown at this time, what is known is that The Hole in the Wall Gang Camp is a community devoted to hope and healing. We will get through this in the way that we always have and always will – as a family.”

According to the camp’s website, the facility was founded by the “The Sting” actor to “give every child - no matter their illness - the chance to ‘raise a little hell.’” The year-round programs associated with the facility serve more than 20,000 children dealing with an illness.