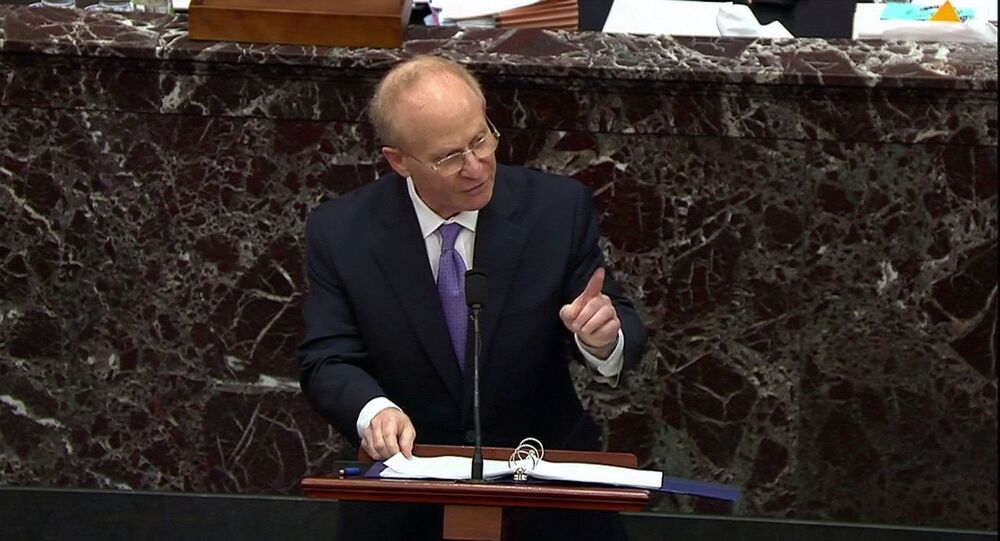 The legal defense team for Donald Trump and its arguments received a lot of critisism and sarcasm from netizens, with some going too far: for example, one Trump lawyer, David Schoen, was mocked during the first day of the trial for making a religion-based move to put his hand on his head while sipping water.

American political analyst Matthew Dowd on Friday appeared to crack a joke that not everyone found hilarious, comparing a recent deadly pile-up car crash in Fort Worth to Trump's impeachment defense team.

After receiving intense backlash on the joke, Down deleted the tweet.

"I saw this picture in the news today. I didn't read the story. Was this picture one of trumps [sic] impeachment defense team presentation?" Dowd asked in the now-deleted tweet.

Despite deleting the tweet, Dowd, responding to users explaining to him that six people died in a car crash that he used to mock Trump's defense team, questioned back: "How many people died at the us capitol?".

This move prompted even more condemnation pouring at the pundit.

he deleted it, yet still defends it pic.twitter.com/2QVnvdwj1S

Why is Matthew Dowd making fun of people who died on the highway? pic.twitter.com/l52yzcplnF

Matthew Dowd, What a crass, cruel comment regarding a serious incident in which lives were lost. Was this a failed attempt at humor, or are you just callously heartless? https://t.co/tjc9XMdbtM

​Even in comments below the later posted tweets, in which Dowd continues to comment on the Trump impeachment trial and posts a dictionary definition of insurrection, users continued to post screenshots of his deleted joke and condemn him for it.

Noun@matthewjdowd A person who makes fun of a multi-vehicle crash with 6 dead and 30 plus injured in the name of his political view. Then tries to deflect by using opposite party atrocious events to justify his stupidity.

​Trump's legal defense team did not receive a warm welcome among netizens, with many slamming his lawyers and his arguments, but this is not the first situation in which ridicule is seen as offensive.

The most recent decision by the team to roll out a video where some Democratic politicans and celebrities such as Madonna and Johnny Depp are "advocating violence" was met with giggles online, as users pointed out that celebrities are not elected officials, unlike Trump, who is accused of inciting insurrection during the deadly January 6 Capitol riot.

During the first day of the impeachment trial, as one of Trump lawyers, David Schoen, was delivering opening remarks, he appeared to put his palm on his head when he took sips of water - a move that prompted questions and, in some cases, jokes.

Later, when Schoen's move was explained to be religious-based, as he was an orthodox Jew, some apologized for their mockery of him.