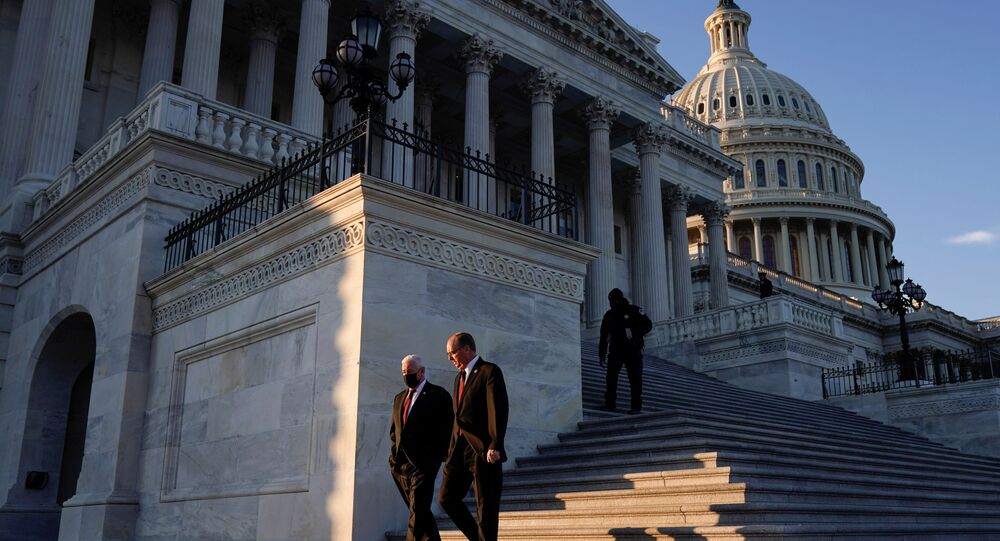 New Centre-Right Party Won't be Viable to Win a National Majority in the US, Academics Say

Dozens of Republican politicians including former officials in the GOP administrations of Ronald Reagan, George HW Bush, George W Bush and Donald Trump, are reportedly in talks to create a third centre-right party in a bid to counterbalance Trump's influence on the right side of the aisle.

On 5 February, more than 120 Republicans held a Zoom meeting to talk about the potential establishment of a new third party, Reuters reported on Thursday, citing four people involved in the discussions. According to the media outlet, the new party would run on a platform of "principled conservatism", including adherence to the US Constitution and the rule of law. It's not the first time; when prominent GOP members of previous administrations teamed up to confront Trump in early July, a vast group of George W Bush administration and campaign officials kicked off a super political action committee (PAC) called "43 Alumni for Biden" endorsing Joe Biden in the 2020 elections.

'GOP Sector That Outraged With Trump is Fairly Small'

There are a number of independents who would be excited by the Republicans' new initiative, believes John Tures, political science professor at LaGrange College in Georgia.

"I think there are a lot of Republicans whom I know, who are moderate Republicans, who really did not like what Donald Trump did," he says. "I think they're shocked that Republicans are not voting to impeach, not voting to remove Trump after what happened. I think what will happen is it may have the effect of moderating the Republican Party."

At the same time, one must bear in mind that the sector of the Republican Party that is strongly dissatisfied with Trump or that is outraged by Donald Trump, is fairly small, according to Matthew Wilson, associate professor of political science at Southern Methodist University.

"It's well represented at the elite level, but doesn't really translate into a lot of voters at the mass political level," Wilson says. "If what these people are hoping for is to create a party that is genuinely viable to win a national majority, I think that is exceedingly unlikely."

It is, however, also exceedingly unlikely that they could create a third party force that could be in - and of itself actually win - major elections in the United States, he emphasises.

The 6 January Capitol incident deepened the rift within the party with some GOP lawmakers supporting the House Democrats' initiative to impeach Donald Trump over an alleged "incitement of violence".

Meanwhile, a recent Gallup poll indicates that 88 percent of Republicans and Republican-leaning independents presently oppose Trump's conviction in the Senate impeachment trial with only 10 percent favouring it. These figures are similar to those registered during Trump's first impeachment in January 2020, according to the pollster.

What are the New Conservative Party's True Goals?

Lisa Murkowski, Mitt Romney, Susan Collins, Ben Sasse, and like-minded Republicans are likely to jump on the bandwagon of the new centre-right breakaway party, according to Tures. Though he does not believe it would get enough votes to come out on top in the elections, they might get enough to reduce GOP candidates' odds of winning.

"I think it would be a party that would probably deny Republicans a number of seats if this new party were to be able to field some candidates," Tures says, "so it’s something the Republican Party had better take seriously."

One might wonder what the new party's real goals are, says Wilson: if they want just to make sure that Republicans don't win elections, they can do that, he says. "That is, if they splinter off five or 10 percent of the electorate into their own column, then what they'll do is ensure that Democrats win elections in future… I think the people building this need to decide whether they are comfortable with delivering elections over the short term pretty reliably to the Democratic Party."

The Republican Party's image has already slid in recent months, with 37 percent of American respondents now saying they have a favorable view of the party, down from 43 percent in November, according to Gallup. For their part, the Democrats are now viewed positively by 48 percent of Americans, up 3 points since November.

The GOP's potential separation could also play into the hands of the Trumpist elements within the party, Wilson believes.

Before former GOP political operatives came up with the plan to establish a new conservative party, the Wall Street Journal dropped the hint that Donald Trump was considering forming a new "Patriot Party". However, a week later, the former president’s campaign committee, Donald J Trump for President (DJTFP), rejected the claims that it was involved in a joint fundraising campaign with a new PAC called the Patriot Party, or that the party's activities were authorised by the former occupant of the White House.

Still, a 25 January poll conducted by Just the News and Scott Rasmussen indicated that a hypothetical "Patriot Party" led by Donald Trump would win the support of 23 percent of the electorate, "bumping the GOP down to third place with just 17 percent".

Democrats May Bring 14th Amendment if They Fail to Convict Trump, Schumer Hints