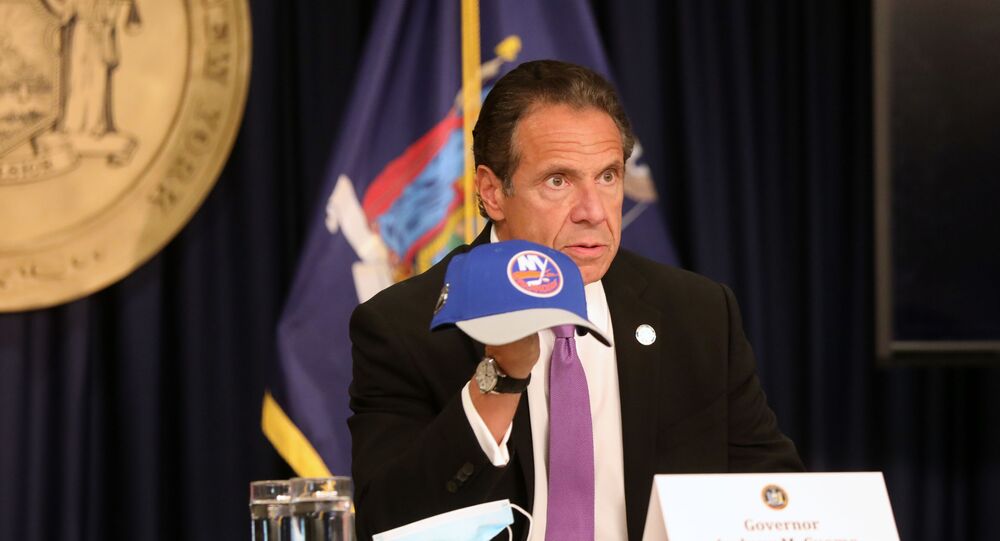 Earlier in January, New York Attorney General Letitia James released a damning report on the state's coronavirus death toll in nursing homes, accusing the Cuomo administration of concealing the true number of seniors who died of COVID in facilities for the aged.

A secretary to New York state Governor Andrew Cuomo, Melissa DeRosa, appeared to confirm in a private call to Democratic lawmakers that the New York state administration had concealed data regarding the coronavirus death toll in nursing homes in the state, according to a record obtained by The New York Post.

In an audio tape of what is said to be two-hour-plus meeting with fellow Democrats, DeRosa said that the state administration did not disclose the actual numbers for fear that the data would be "used against us" by federal prosecutors.

Cuomo's secretary said that "we froze" in fear of a federal investigation and, according to the report, placed the responsibility on then-president Donald Trump "turning this into a giant political football" and attacking Democratic governors.

DeRosa apologized for the data concealment, but, as The Post outlined, not to grieving families of those who died of COVID in nursing homes, but to fellow Democrats whose political reputation may have been damaged due to the revelations.

“So we do apologize,” she said. “I do understand the position that you were put in. I know that it is not fair. It was not our intention to put you in that political position with the Republicans.”

The first apparent acknowledgement of the cover-up comes after the release of a "bombshell" report by New York Attorney General Letitia James, in which it was revealed that the Cuomo administration failed to report thousands of coronavirus-related fatalities to the state's Health Department, and did not implement necessary anti-infection measures.

Based on research at over 62 nursing homes in New York, the findings suggest that the death toll could rise to 13,000 fatalities from the initial number of around 8,700 as of late January.

James said in her report that at least 4,000 nursing home residents died after Cuomo's directive to admit "medically stable" coronavirus patients - something that the AG believes “may have put residents at increased risk of harm in some facilities.”

'They Should All Be Prosecuted'

DeRosa's apology did not prompt empathy from netizens, and neither did they show “a little bit of appreciation of the context”, as the secretary asked in the leaked audiotape.

Calls for Cuomo to be impeached and prosecuted immediately emerged on social media - with some users especially outraged at the fact that, given the nursing home death tally cover-up, the New York governor released a book on his leadership during the pandemic.

Rather sad and embarrassing for NYers. At a time when the public just wanted the truth, leadership was worried about perception.Oh, and writing a book about how great they handled it all. How frustrating!

What chapter in book is that

So how is this ok? How is @andrewcuomo not getting charged with anything? Lying 🤥 and covering up data? WTF 🤦🏻‍♂️

This is infuriating, and I’m sure the DOJ will do absolutely nothing. They should all be prosecuted.

​Several of DeRosa's fellow Democrats, cited by the New York Post, shared comments regarding her statement on the death toll data. Assemblyman Ron Kim said that the remarks sounded “like they admitted that they were trying to dodge having any incriminating evidence that might put the administration or the [Health Department] in further trouble with the Department of Justice.”

“It’s not enough how contrite they are with us,” he said. “They need to show that to the public and the families — and they haven’t done that.”

According to the recording of the call, the Assembly Health Committee chairman, Richard Gottfried, immediately rejected DeRosa's apologies.

“I don’t have enough time today to explain all the reasons why I don’t give that any credit at all,” said Gottfried, who, according to The Post, demanded the data on coronavirus fatalities in August 2020.

The state's Senate Aging Committee chairwoman, Rachel May, also denounced DeRosa, referring to how she was questioned during her re-election bid in 2020 on the issue of nursing home deaths.

“And the issue for me, the biggest issue of all is feeling like I needed to defend — or at least not attack — an administration that was appearing to be covering something up,” she said. “In a pandemic, when you want the public to trust the public-health officials, and there is this clear feeling that they’re not coming, being forthcoming with you, that is really hard and it remains difficult.”