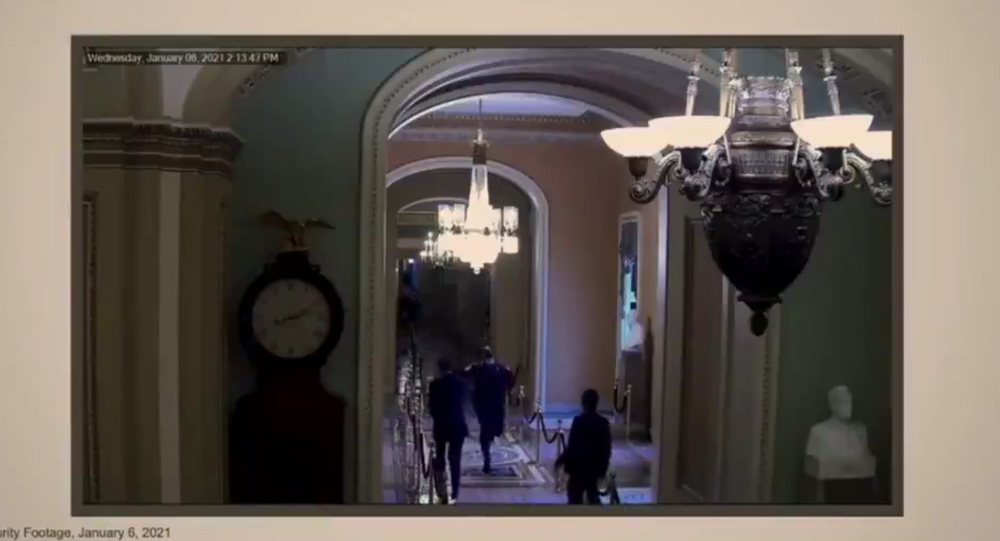 Sen. Mitt Romney (R-UT) was one of several lawmakers specifically targeted by the pro-Trump rioters that stormed Capitol Hill and forced their way into the US Capitol building to protest the results of the 2020 presidential election. Four rioters and one police officer died as a direct result of the attack.

“Officer Goodman passes Sen. Mitt Romney and directs him to turn around in order to get to safety,” narrated impeach manager Stacey Plaskett, the 5th delegate to the US House of Representatives from the US Virgin Islands' at-large congressional district.

Whoa: Eugene Goodman ran into Mitt Romney in the hallway and told him to turn around and get to safety, as the mob entered the building, in new footage.

Romney was going to run DIRECTLY into the rioters pic.twitter.com/0PX5LlxyXo

“On the first floor, just beneath them, the mob had already started to search for the Senate chamber. Officer Goodman made his way down to the first floor where he encountered the same insurrectionists we just saw breach the Capitol," she added.

Goodman, who has been recommended to receive the Congressional Gold Medal for his efforts, was lauded for what many describe as his acts of "heroism" in confronting the pro-Trump mob.

Officer Goodman is a military vet and a hero. He saved countless people from injury and/or death including Mitt Romney on January 6th. Medal of Freedom candidate without a doubt. https://t.co/SLUYywVGCC

Republicans should be defending men like Officer Eugene Goodman, not Donald Trump.

Eugene Goodman literally led the mob away from the Chamber. The door was right there.

It says so much about the “Blue Lives Matter” movement, or even just your local FOP chapter, that none of them have embraced Eugene Goodman as their new champion.

All Senators are alive today because of the bravery of Officer Goodman - a Black man.

"It tears your, your heart and brings tears to your eyes, that was overwhelmingly distressing and emotional," the Utah senator said in response to seeing the video, as reported by NBC's Jullie Tsirkin.

Romney, a critic of Trump, increasingly faced backlash after he broke ranks as the sole GOP senator to vote to convict Trump of abuse of power in the former US president's first impeachment trial in 2020. Trump, who was also impeached on a charge of obstruction of Congress, was on 8 January impeached in the House for a second time, for "incitement of insurrection".

A day before the 6 January Capitol Hill attacks, Romney was confronted by an unnamed individual who openly questioned why the Utah senator is not supporting Trump, who switched to being a Republican several years ago after decades as a Democrat.

“We have a Constitution, the constitutional process is clear,” Romney asserted, speaking of the Electoral College vote certification process. “I’ll follow the Constitution, and I’ll explain all that when we meet in Congress this week.” “Well, you haven’t supported him, and you didn’t even support him in the election,” the individual was overheard saying in a since-deleted video. "You were voted in as a conservative to represent the conservative constituents. Period."