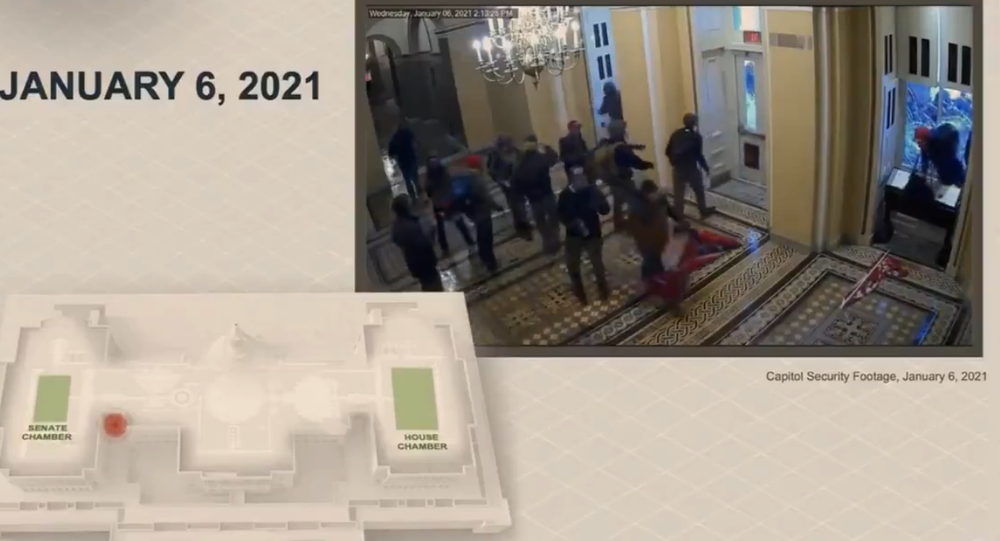 On 6 January, the US Capitol was attacked by violent Trump supporters who disrupted the certification of the presidential election results and caused the evacuation of lawmakers from the building. Five people died as a result of the riot, including a police officer. All the Dems and some GOP House members agreed that Trump incited the insurrection.

Wednesday marked the second day of the second impeachment trial in the Senate for Donald Trump, with Democratic impeachment managers presenting never before seen video footage from the Capitol attack that shed light onto the horrific details of the events of that day.

Newly released security video shows then-Senate Minority Leader Schumer being escorted down a hallway by his security details and then turning around and being rushed in the opposite direction.

Officers then barricade themselves against the door. pic.twitter.com/Nd6os6bKV7

Security footage shows former Vice President Mike Pence and his family being evacuated from the U.S. Capitol after rioters breached the building on January 6.pic.twitter.com/KFUDK50MEg

​One of the videos demonstrates rioters rushing through Capitol hallways and ominously calling House Speaker Nancy Pelosi by the name.

"Naaaaancy. Oh, Naaaaancy." “Where are you Nancy?” - Part of video shown during impeachment trial.

​Following the attack, Capitol police officer Eugene Goodman received special appreciation for his actions when he alone had to redirect the pro-Trump attackers forcing their way through Capitol hallways. As he managed to get away from the rioters, he appeared to "save Mitt Romney's life" as he told him to flee, when he met the senator in the hallway.

If you're watching the #TrumpImpeachmentTrial, here's our split-screen video showing two angles of Officer Eugene Goodman leading the Capitol rioters away from lawmakers. pic.twitter.com/f1QmvtykpA

​Among the video evidence, Democrats also presented audio recordings from police radio of the 6 January events. Police officers are heard saying that rioters were "throwing metal poles at us … they’re starting to throw explosives, fireworks material".

Metropolitan Police dispatch from the Capitol attack made public for the first time:

Representative Stacey Plaskett also said that the march from the Ellipse to the Capitol was not authorised until Trump intervened.

"It was not till after President Trump and his team became involved in the planning that the march from the Ellipse to the Capitol came about", Plaskett told the Senate.

​Before presenting the new videos, House impeachment managers warned that the content they were about to show could not be suitable for children.

"We do urge parents and teachers to exercise close review of what young people are watching here, and please watch along with them if you're allowing them to watch," Jamie Raskin, one of the managers, said. "The impeachment managers will try to give warnings before the most graphic and disturbing violence."

During the second day of the trial, Trump was labeled 'inciter-in-chief', as impeachment managers argued that he incited the deadly insurrection on 6 January. The House managers urged the Senate to vote to convict Trump.

Earlier on Tuesday, the Senate decided that the impeachment trial against a former president is constitutional, with all Democrats and six Republicans voting yes. In order to convict Trump, however, at least 17 Republican votes are needed - something that many observers say is unlikely to happen.

Trump vehemently denied his responsibility in the deadly Capitol siege violence, while his legal defense team continues to  claim that the impeachment is unconstitutional.