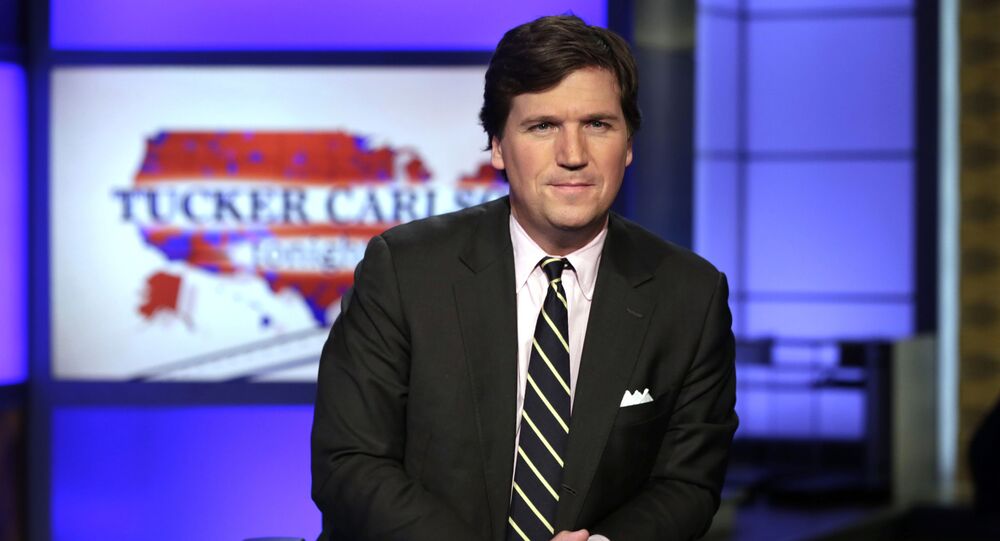 The paleoconservative television presenter and political commentator – host of one of the few cable news political shows whose ratings haven’t tanked since Joe Biden's election, has accused elites of “lying” about coronavirus vaccinination programme currently underway in the US.

Fox News host Tucker Carlson has scolded US officials, big tech companies and the media for their alleged efforts to censor or soften any skepticism among Americans toward coronavirus vaccines.

“Why are Americans being discouraged from asking simple, straightforward questions about it? How effective are these drugs? Are they safe? What’s the miscarriage risk for pregnant women, for example? Is there a study on that? May we see it? And by the way, how much are the drug companies making off this stuff?” Tucker asked in a segment on his show Tuesday night.

“There’s nothing QAnon about questions like that,” he suggested, referring to the conspiracy theory that claims Donald Trump fought an elite cabal of Satan-worshiping pedophiles during his time in office.

“These questions are not conspiracy theories. They’re the most basic questions. In a democracy, every citizen has a right to know the answer, but instead we got fluff and propaganda. The media rollout for the vaccine came off like a Diet Pepsi commercial at the Super Bowl. Tons of celebrity endorsements, not a lot of science. It was totally disingenuous and naturally it had the opposite of the intended effect,” the commentator suggested.

“Most Americans already supported vaccines. They didn’t need to be browbeaten in order to be convinced. They were grateful their kids no longer get tetanus and polio and chickenpox. They weren’t anti-vaxxers. And yet from the very first day, the way the authorities handled the coronavirus vaccine did not inspire confidence,” he added. "If the vaccine was so great, why were all these people lying about it? Honest question. And they were lying. Clearly, they were lying. You know that for certain because from the moment the Covid vaccine arrived, the most powerful people in America worked to make certain that no one could criticize it."

The host went on to criticize Bill Gates’ wife Melinda for her comments late last year suggesting regulators need to “catch up” in "regulating" views on the vaccine online, recalling that she has has no medical background to make any determinations about the jabs.

© CC BY 2.0 / Jernej Furman / US Dollars and a face mask
Coronavirus Billionaires: Forbes Lists 50 New Medical Industry Moguls Who Got Rich Off Pandemic
“Is this really science? Not even close. It's oligarchy, and all the billionaires are participating in it. The tech companies announced early they would not allow anyone to criticize this vaccine, and anyone who did would be kicked off their platforms right away. Corporate media then took it upon themselves to enforce this rule,” Carlson complained.

The commentator accused Facebook of ‘leading the way’ on vaccine-related censorship, including banning people from taking out ads portraying vaccines as ‘unsafe or ineffective’, and scrubbing a group called 'COVID-19 Vaccine Injury Stories' that discussed potential side effects. Twitter, he said, has engaged in similar behaviour, suspending users reporting side effects.

Commenting on a recent New York Times piece about a small group of people who developed a rare blood disorder after being vaccinated, including a woman who expressed fears that she might be penalized for criticizing the vaccine, Carlson suggested that this was censorship, not science. “Science can't live in an environment like this. Without relentless skepticism, science dies. That's what science is, relentless skepticism. And when it leaves, inevitably it's replaced by witchcraft and superstition. Are we there yet? You decide.”

Carlson is not an anti-vaxxer, saying he and his family would get the vaccine after doing his own research to determine its safety. However, his questions about the US government's rollout of vaccines and the details of the contracts signed with pharmaceutical companies have repeatedly earned him scorn from major media. In December, CNN suggested a segment he did on vaccines at the time "should be called out by every reputable news organization," while Forbes accused him of unreasonably "stoking" fears about the jabs.

Vaccines by Moderna and Pfizer-BioNTech have been approved for use in the US by the Food and Drug Administration. The US government purchased 400 million doses' worth of the drugs, enough for 200 million people, by December. Late last month, President Joe Biden announced that Washington would buy 200 million more doses, with the order to be split between the two companies.

Americans' attitudes toward vaccines have shifted with time, with the public said to have become more accepting of the jabs over the past year. On Wednesday, an Associated Press-NORC Center for Public Affairs Research poll found that nearly one in three Americans "definitely" or "probably" won't agree to get vaccinated. Meanwhile, a Monmouth University Poll from last week showed that 56 percent of respondents had plans to be vaccinated or had already done so, with 24 percent saying they would never get the vaccine, and 19 percent saying they would prefer to wait.