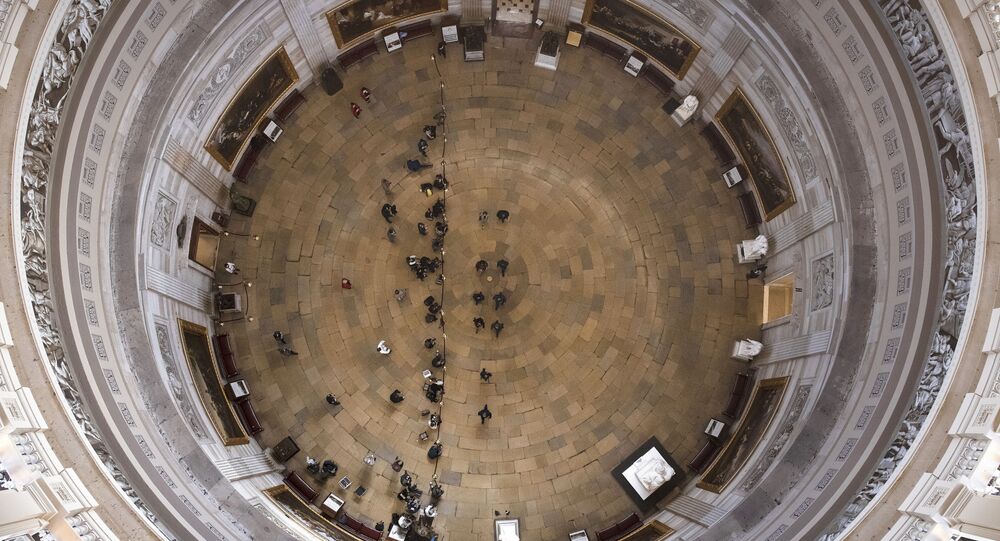 9 February marked the beginning of the impeachment trial against former US President Donald Trump based on the charge that he had incited an “insurrection” that led to the storming of the Capitol building on 6 January.

The first day of the second impeachment trial against former President Donald Trump has come to a close in the US Senate. The arguments were heard and the decision was made – the trial will go on, following a 56-44 vote that deemed the proceeding constitutional.

As the spectacle is expected to unfold over the next week or so, here are the most important things to know about the first day of the impeachment saga - round two:

Tuesday kicked off with a four-hour debate and a vote on whether the trial should be held at all – Trump's defence insists that the ex-president is constitutionally “impervious”, as he has already left office and it doesn’t make sense to impeach him.

A simple majority was needed to proceed with the trial. Back in January, five Republicans supported the case when the Congress’ 100-seat upper chamber initially voted to approve the trial 55-45.

But the Republican senators - Susan Collins of Maine, Lisa Murkowski of Alaska, Mitt Romney of Utah, Ben Sasse of Nebraska, and Pat Toomey of Pennsylvania - were also joined by Louisiana Senator Bill Cassidy on Tuesday to deem the trial constitutional.

63-year-old Cassidy explained his move by saying that as an “impartial juror”, he could recognise that the House managers were doing “a great job”, while Trump’s defence team was “disorganised” and “did everything they could but to talk about the question at hand”.

© AP Photo / Chip Somodevilla
Sen. Bill Cassidy, R-La., talks with reporters as he leaves the U.S. Capitol after the first day of Trump's second impeachment trial in the Senate, Tuesday, Feb. 9, 2021, in Washington

This doesn’t necessarily mean that any of the senators will ultimately vote to convict Trump when the trial comes to an end. In order to be convicted, two-thirds of the present members of the Senate, 67, are needed to find the ex-POTUS guilty of “incitement of insurrection”.

Cassidy was not the only Republican senator who thought that the arguments of Trump’s lawyers were unconvincing. A number of other lawmakers, including Alaska Senator Murkowski, were especially bemused by the speech of the ex-president’s first lawyer Bruce Castor Jr.

Castor raised many eyebrows with convoluted historical references to Greece and Rome falling as democracies or bizarre comments about Nebraska being “a judicial thinking place”.

Murkowski, who voted for the trial to proceed, later told reporters that most of the time she was not sure what Trump’s attorney was talking about.

"I couldn't figure out where he was going, spent 45 minutes going somewhere, but I don't think he helped with us better understanding where he was coming from on the constitutionality of this”.

what ... what is going on pic.twitter.com/XAgv9ZNzJZ

In fairness, however, Castor admitted that his team made some last-minute changes to the presentation of their arguments: “I’ll be quite frank with you, we changed what we were going to do on account that we thought the House managers’ presentation was well done”.

Some analysts noted that Castor’s strategy was deliberate in a way, as he was apparently trying to “reduce the emotion in the room” following a heart-wrenching account from Rep. Jamie Raskin, who supported the prosecution.

Schoen will speak after Castor, and is expected to talk for longer and make the case about constitutionality of the trial, the adviser says.

​Raskin's speech was seen as very emotional and personal, as the politician went on to recall the 6 January events and how this had affected his family, just a day after they buried his 25-year-old son Tommy.

© AP Photo
In this image from video, House impeachment manager Rep. Jamie Raskin, D-Md., becomes emotional as he speaks during the second impeachment trial of former President Donald Trump in the Senate at the U.S. Capitol in Washington, Tuesday, Feb. 9, 2021

The Democrat recalled his feelings when his daughter and son-in-law, who accompanied him to the Capitol on that day, were trapped in the office of Majority Leader Steny Hoyer as the protesters broke into the building.

"Then there was a sound I’ll never forget – the sound of pounding on the door like a battering ram, the most haunting sound I’ve ever heard and I will never forget it”, Raskin recounted.

According to observers, emotions were running high in the room following his speech.

However, it was not only words, but also images that turned the prosecution’s address into a real performance.

As was expected, impeachment manager Raskin used video “evidence” to bring up points that Trump was guilty of encouraging protesters to storm the Congress building while lawmakers were about to certify Joe Biden’s victory.

Rep. Raskin's opening impeachment trial statement: "Their argument is that if you commit an impeachable offense in your last few weeks in office, you do it with constitutional impunity." pic.twitter.com/lIrRiu36IF

Images of Trump telling his supporters to “fight like hell" was combined with clips of rioters breaking into the building or assaulting Capitol police. The 13-minute video turned out to be rather “graphic”, Fox News said.

As senators voted to support the constitutionality of the trial against the former commander-in-chief, Senate Majority Leader Chuck Schumer and Republican Minority Leader Mitch McConnell introduced a resolution that approved the rules and timeline of the proceedings.

The eight-page document stated that the trial would go on through the weekend with no days off, despite a previously raised and then withdrawn request from Trump’s second attorney David Schoen asking to observe the Jewish Sabbath from Friday evening to Sunday.

Starting Wednesday, House managers and Trump’s defence team will have two eight-hour days each to present their arguments for why the ex-president should be convicted or acquitted of the charges. The prosecution team is expected to go first with their accusations.

After four days of debate, there will then be time for a Q&A session for both teams. This will be followed by a formal procedure to subpoena any witnesses and vote on it. Not many witnesses are expected to testify, but the trial could still take an unexpected turn.

In the next few days, senators will hear the closing statements and have time to decide whether they were more convinced by prosecution or defence teams. Finally, after some time left for deliberation, the US Senate will vote on the article of impeachment.

If Trump is found guilty in the end - which still seems unlikely, as nearly 17 Republican senators will have to support the case – there will be another vote on whether he should be barred from ever holding public office again.