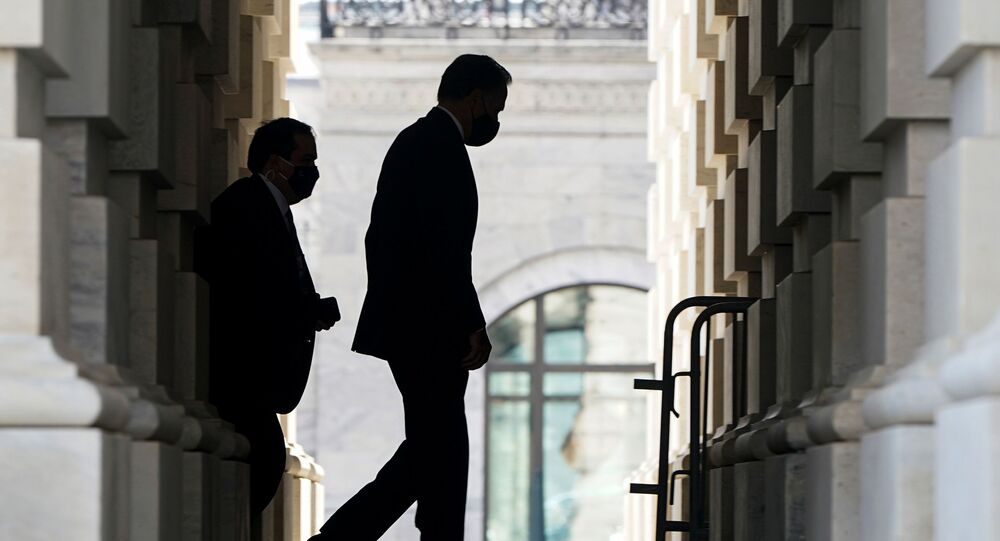 Six Republican Senators Who Voted That Trump Impeachment Is Constitutional

A test vote held among Republican senators in late January revealed that only five GOP members of the US upper house were ready to back the unprecedented second impeachment of Donald Trump in the Senate - which is still 12 Republicans less than needed for a conviction.

A Tuesday vote in the Senate ruled that the second impeachment of Donald Trump is constitutional, even though this is the first time in US history that a former president is on trial for impeachment.

The vote saw all Democrats voting yes, and revealed six Republican senators crossing party lines in their support of the constitutionality of Trump's second impeachment in the Senate.

The six supporters of the constitutionality of the impeachment are Susan Collins of Maine, Lisa Murkowski of Alaska, Mitt Romney of Utah, Ben Sasse of Nebraska and Pat Toomey of Pennsylvania, who voiced their intention to back the impeachment in the test vote, joined by Bill Cassidy of Louisiana.

Here is a closer look at the six.

Senator Susan Collins of Maine is the longest-serving Republican woman in the Senate, and she describes herself as a moderate GOP, often being a pivotal GOP vote in the Senate.

Collins was present at the 6 January joint Congress session certifying the 2020 election results - a process disrupted by a violent mob of Trump supporters who stormed into the Capitol, killing five, and had the lawmakers evacuated.

She called the experience "frightening and appalling", later dubbing the Capitol riot "a dangerous, shameful, and outrageous attack on our democracy" and accusing Trump of inciting the deadly attack.

In January, Collins said the she will not roll out a final decision before the arguments are presented, outlining, however, that she expected the trial to go forward.

"I'm not going to prejudge votes until I hear arguments", she told CBS 13. "I've been talking with constitutional scholars and some of the best lawyers I know. My expectation is that a trial will go forward."

© REUTERS / TOM BRENNER
U.S. Senator Susan Collins (R-ME) rides an escalator while arriving in the subway system at the U.S Capitol as the impeachment trial of former U.S. President Donald Trump, on charges of inciting the deadly attack on the U.S. Capitol, begins on Capitol Hill in Washington, U.S., February 9, 2021

A Senator from Louisiana, Bill Cassidy was the one to join his five counterparts who voiced their support for Trump's impeachment in the test vote last month.

Cassidy praised the House impeachment managers for having "a very good opening" of their presentation, while slamming speeches delivered by Trump attorneys David Schoen and Bruce Castor for "doing a terrible job".

Cassidy served in the US House of Representatives from 2009 to 2015. Before 2001, he was a member of the Democratic party.

Lisa Murkowski, of Alaska, became the first Senator in half a century to win an election with a write-in campaign in 2010, after losing in the Republican primary.

A second most-senior woman Republican woman in the Senate, Murkowski is frequently described as one of the most moderate GOP members.

Regarding the violent events of 6 January, she called on Trump to resign after his supporters stormed the US Capitol. Justifying her Tuesday vote, Murkowski stated that the Senate is granted the power to try all impeachments, even those aimed at a former president.

"Today's vote was not about President Trump", she said. "It was about the Senate retaining jurisdiction to try a former official who was impeached while in office for acts done while in office."

© REUTERS / POOL
Senator Lisa Murkowski, R-AK, speaks during the hearing of Marty Walsh before the Senate Health, Education, Labor, and Pensions Committee on his nomination to be the next labor secretary, in the Dirksen Senate Office Building on Capitol Hill in Washington, DC, U.S. February 4, 2021

A Senator from Utah, Mitt Romney was the Republican nominee for the president of the United States in the 2012 election and is particularly known for criticizing Trump.

In Trump's first impeachment trial in 2020, Romney was the only Republican Senator who voted to convict him on the allegations of abuse of power and obstruction of justice.

Weeks before the trial, Romney told CNN that he believed the trial was constitutional and said he believed Trump committed impeachable offenses.

"I'll of course hear what the lawyers have to say for each side. But I think it's pretty clear that the effort is constitutional," he said. "I believe that what is being alleged and what we saw, which is incitement to insurrection, is an impeachable offense. If not, what is?"

The Nebraska Senator, considered by many to be a potential Republican challenger for the Oval Office in 2024, is a vocal critic of Trump.

Having said that "politics isn't about the weird worship of one dude" when asked about his lack of support for Trump, Sasse also denounced claims about the alleged election fraud at 2020 presidential election.

The Senator was among those voting to acquit Trump of abuse of power and obstruction of justice allegations after the latter was impeached by the House in January 2020.

When Trump was accused of "incitement of insurrection" impeached a second time, Sasse was one of the first in the Republican party to support the initiative.

Pat Toomey from Pennsylvania has served as a US Senator since 2011, and announced in 2020 that he would seek re-election.

During Trump's first impeachment, Toomey voted to acquit the former president, having said that 2019 impeachment was not worth discussing.

When it comes to 2021, the Pennsylvania Senator voiced a harsher stance, asserting that he thought Trump had committed impeachable offenses in regard to his role in the deadly 6 January Capitol riot and killings.