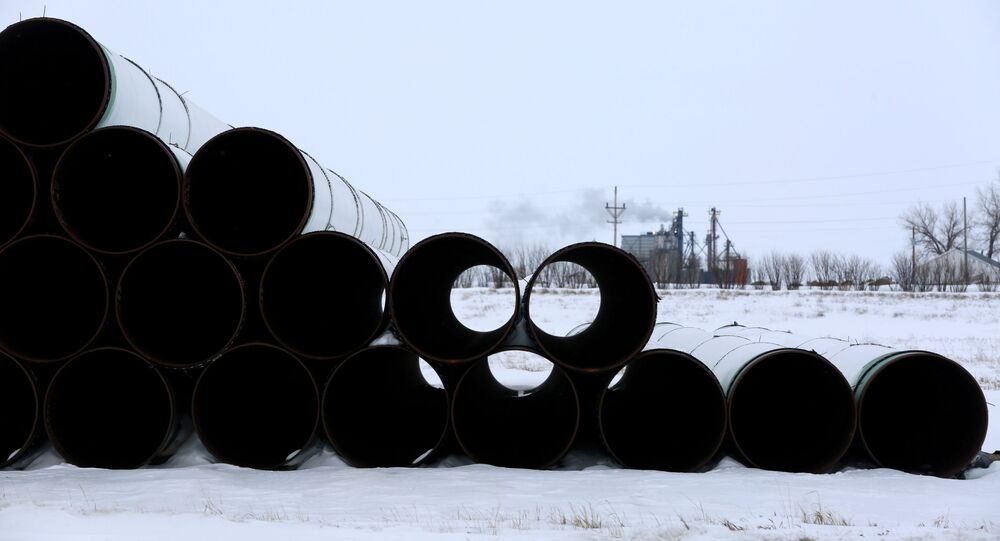 The Keystone XL pipeline, which would carry oil from Alberta and several northern US states southward, has been a political football in US politics for over a decade as labor unions, oil titans, indigenous nations and environmentalists struggle over the project.

In a Tuesday letter to US President Joe Biden, Sen. Joe Manchin (D-WV) urged the reversal of the former's January 20 executive order halting construction of the Keystone XL oil pipeline, stating that the decision will cost jobs.

“Pipelines continue to be the safest mode to transport our oil and natural gas resources and they support thousands of high-paying, American union jobs,” Manchin said in his letter. “I encourage you to reconsider your decision to revoke the cross-border permit for the Keystone XL pipeline and take into account the potential impacts of any further action to safety, jobs and energy security.”

The lawmaker added that without the pipeline, crude oil mined in Canada’s Alberta Province will instead be transported by truck and rail, which are more likely to leak petroleum than pipelines. He also said that maintaining energy security by buying fuel from allies instead of “increasing reliance on OPEC [Organization of Petroleum-Exporting Countries] nations and Russia” was important and should not be sacrificed in the quest for green jobs.

The petroleum would arrive in part from Alberta's oil sands, the extraction of which National Geographic described as "the world's most destructive oil operation," with tailings so vast they are visible from space.

Republicans, ever hostile to Democratic plans to abandon the burning of fossil fuel for power generation, seized the opportunity on Tuesday, tweeting that “We’re only a few weeks into Joe Biden’s presidency and even Democrats are upset.”

We’re only a few weeks into Joe Biden’s presidency and even Democrats are upset.

Today, @Sen_JoeManchin sent a letter to the President urging him to reconsider his decision to kill the Keystone XL Pipeline and the thousands of American jobs it has created.

​“Today, @Sen_JoeManchin sent a letter to the president urging him to reconsider his decision to kill the Keystone XL Pipeline and the thousands of American jobs it has created,” the Senate GOP Twitter account continued, urging followers to read and retweet Manchin's letter, considered one of the Democratic Party’s most conservative members.

The Keystone XL is just one of several proposed fossil fuel pipelines crisscrossing the US that have been challenged by many, including environmentalists and indigenous people, in recent years. Its path across the lands of several Native American nations, as well as the Ogallala Aquifer, has led to the project being repeatedly stalled.

On January 24, 2017, after just four days in office, then-US President Donald Trump ordered the project to proceed. The issue then bounced back and forth in the courts until the US Supreme Court ruled in July 2020 that project developer TC Energy lacked a proper water-crossing permit, again halting construction.

Richard Trumka, president of the AFL-CIO, the largest labor union in the US, protested Biden’s January 20 decision, saying it should have been paired with an announcement about job creation. Trumka is particularly sensitive to promises about replacing fossil fuel-related jobs with green or tech jobs, since that was the fate of his own employment as a coal miner in Pennsylvania.

TC Energy said it would cut roughly 1,000 jobs as a result of the project’s cancellation, which was also claimed to be likely to create an estimated 10,000 additional construction jobs once it extended into the US. The part of the pipeline north of the US-Canada border has been under construction since 2010.

Thanks to the rapid growth of the renewable energy industry, there are already more than 245,000 jobs in the solar energy field alone - many more than in oil and gas extraction, according to Bloomberg - and wind power employs another 100,000 Americans. The re-educating of American oil and gas workers for jobs in those fields is another challenge, however.

Biden promised during the 2020 presidential election campaign to create 10 million new jobs in the green energy industry, producing wind turbines, solar panels, and other renewable and low-polluting electrical sources, as well as to “pursue new partnerships with community colleges, unions, and the private sector to develop programs to train all of America’s workforce to tap into the growing clean energy economy.” The plan aims to eliminate by 2035 the use of burning fossil fuels to generate electricity.