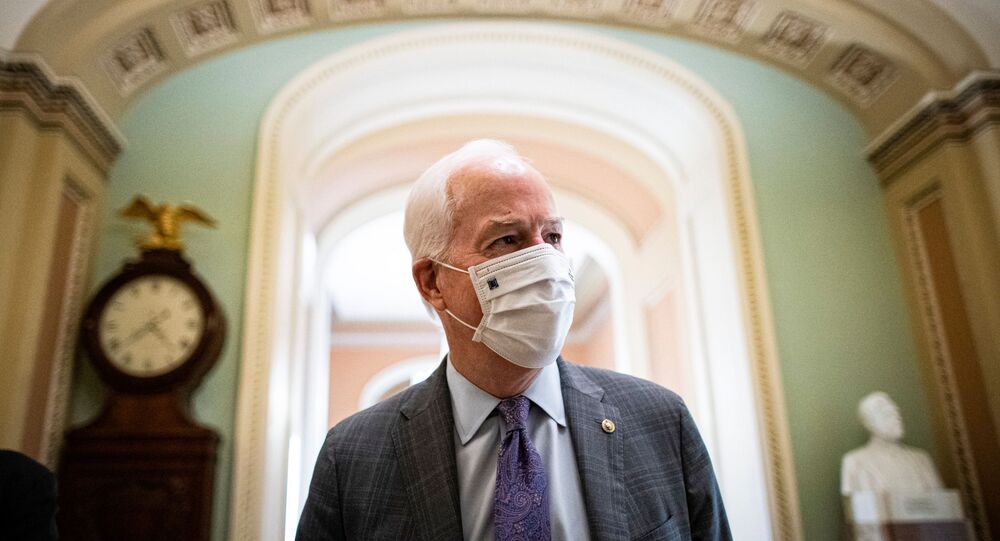 "President Trump's team was disorganized, they did everything they could but to talk about the question at hand and when they talked about it, they kind of glided over it, almost as if they were embarrassed of their arguments" Senator Bill Cassidy said on Tuesday.

Cassidy said House prosecutors were focused, organized, and made a compelling argument.

Cassidy is one of six Republican Senators who sided with Democrats on Tuesday in a vote to declare the Trump impeachment trial constitutional, with a 56-44 vote. He had previously voted two weeks ago to dismiss the impeachment trial but that maneuver failed with a 55-45 vote.

Cornyn remarked to reporters that he has seen many legal arguments but noted that the efforts of the Trump team were not the "finest" he has seen. Cruz said Trump's legal defense team did not do "the most effective job."

JONATHAN ERNST
U.S. Senate Minority Leader Mitch McConnell (R-KY) walks outside the Senate Chamber during a break in the opening day of the impeachment trial of former U.S. President Donald Trump, on charges of inciting the deadly attack on the U.S. Capitol, on Capitol Hill in Washington, U.S., February 9, 2021.

CNN reported that Trump was enraged by his defense team's opening arguments.

Trump attorney Bruce Castor told reporters he thought the legal defense team "had a good day," adding that they would not make any adjustments regardless of criticism received from GOP senators. Defense attorney David Schoen said he thought his partner Castor "did a great job."

Castor and Schoen joined Trump's legal team earlier this month after five of his impeachment lawyers, including Butch Bowers and Deborah Barbier, left.

At least 17 Republican Senators must side with Democrats to have the required two-thirds majority to convict Trump in the Senate.

Democrats and some Republicans seek to use the sole Article of Impeachment - the "incitement of insurrection" - to disqualify Trump from ever again holding public office, including running for president in 2024. The Article of Impeachment alleges that in the months preceding the deadly January 6 attack at the US Capitol, Trump repeatedly issued baseless statements asserting that the election results were the product of widespread fraud and should not be accepted by Americans.