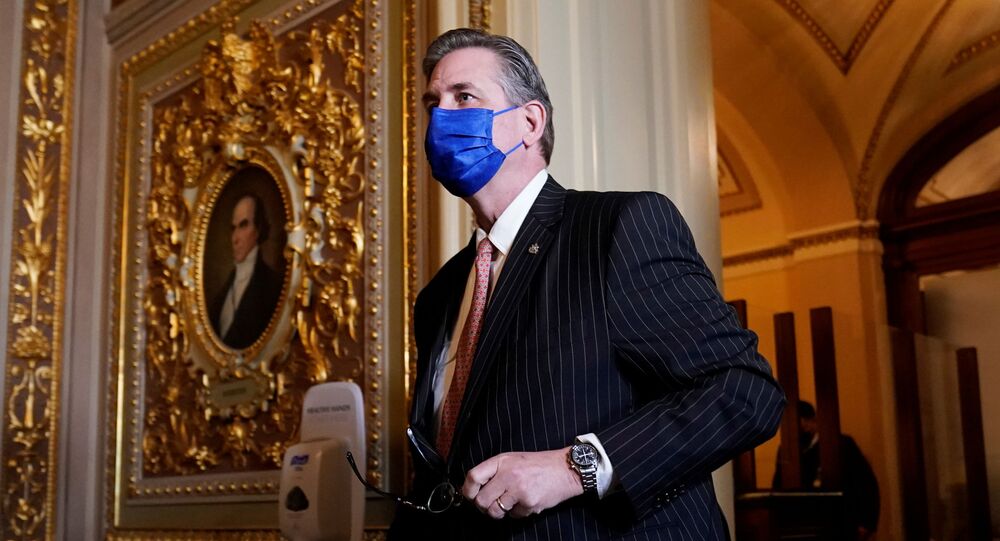 WASHINGTON (Sputnik) - Bruce Castor, a lawyer employed by the former US president, Donald Trump, urged lawmakers not to trivialize impeachment and warned that the pressure to respond in kind will be enormous once the political pendulum shifts.

Castor laid out the defense's arguments in the Senate, which started Trump's second impeachment trial earlier in the day and deliberated on whether it has jurisdiction over the case.

“If we go down the road that my very worthy adversary here, [House manager] Mr. [Jamie] Raskin, asks you to go down, the floodgates will open,” Castor warned, adding, “The political pendulum will shift one day. This chamber and the chamber across the way will change one day. And partisan impeachments will become commonplace... The pressure will be enormous to respond in kind."

Castor called on lawmakers to reverse the tide and preserve impeachments as “the ultimate safety valve” and “the most rare treatment.”

Democrats and some Republicans seek to use the sole Article of Impeachment - the "incitement of insurrection" - to disqualify Trump from ever again holding public office, including running for president in 2024. The Article of Impeachment alleges that in the months preceding the deadly January 6 attack at the US Capitol, Trump repeatedly issued false statements asserting without evidence that the election results were the product of widespread fraud and should not be accepted by Americans.

Castor defended Trump’s statements as speech protected by the First Amendment, including the speech he gave on January 6 in which he called on his supporters to "Stop the Steal".

“This trial is about trading liberty for the security from the mob. Honestly, no! We can’t be thinking about that. We can’t possibly be suggesting that we punish people for political speech in this country. If people go and commit lawless acts as a result of their beliefs and they cross the line they should be locked up,” he said.

Castor also argued that the Senate lacks jurisdiction over Trump because he holds no public office from which he can be removed.

Castor added that now that Trump is out of office he could be arrested if there were legal grounds.

“There is no opportunity where the president of the United States can run rampant in January, the end of his term, and just go away scot-free. The Department of Justice does know what to do with such people. So far I haven’t seen any activity in that direction,” he said.

“The people, who stormed this building and breached it, were not accused of conspiring with the president,” Castor added.

Earlier on Tuesday, the Justice Department said more than 200 defendants had been charged in federal court in connection with the violent unrest at the Capitol on January 6 that saw five killed, inclduing a Capitol police officer who was beaten to death by Trump supporters.

After hearing both sides, the Senate is expected to vote on the trial. Unless the case is dismissed over a lack of jurisdiction, the House managers, who act as prosecutors, and Trump’s lawyers, each will be given 16 hours over two days to lay out their arguments for a Senate conviction.

The Constitution requires a two-thirds vote for a conviction in the Senate, meaning that at least 17 of the 50 Senate Republicans must join their Democratic colleagues. Last month, only five voted against a procedural motion to dismiss the trial on constitutional grounds, an indication that the impeachment lacks the necessary support.